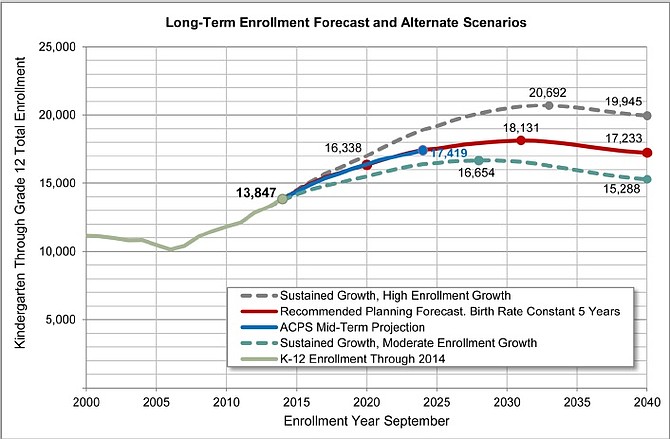 “When we’re looking at planning for schools, we have to … be honest with ourselves as well as the public about the funding”.

The Fiscal Challenges section of the Long Range Educational Facilities Plan is still undergoing review, but early drafts show a $441.2 million total for implementing modernization, educational specification, and capacity-related improvements. However, members of the planning committee noted that the overall price tag isn’t reflective of the intent of the document.

“These plans exist in the long range,” said School Board Chair Karen Graf. “This doesn’t mean we’re going to act on these items in 25 years. We can’t do that; the operating costs alone wouldn’t be realistic for us.”

The document is continually being edited and refined, but at the Long Range Education Plan’s initial presentation to the City Council on April 28, the lack of a budget or any funding costs raised concern.

“The assumption that we have unlimited funds is a huge red flag,” said Councilman John Chapman. “When we’re looking at planning for schools, we have to … be honest with ourselves as well as the public about the funding. The fiscal challenges piece is a lot tougher because we now have unbridled thoughts and feelings around what we’re looking at for each site, so it’s going to be a lot harder to curtail those kind of thoughts and focus, especially if we took this out to the public and said ‘we have these options.’ We can build some quality schools, but we can’t give everyone their hopes, dreams, and wishes with each school building.”

But according to Wilson, the total budget information was not included in the document because the document does not call on the City Council to fund every proposed solution.

“This is not the CIP, that’s a separate document constrained by our budget ambitions,” said Wilson. “We have master plan after master plan where we don’t have the foggiest idea how to implement or fund the whole thing, but we adopt the plans because they give us a framework for how to approach these issues. This is a roadmap, it gives us a series of options. The intention is never to immediately implement 100 percent of it, and in some cases we probably don’t intend to implement some parts of it, even in the long term.”

Graf acknowledged the need for concrete numbers and estimates.

“It’s good to have numbers and projections in the [Long Range Educational Facilities Plan], it gives the document credibility,” said Graf, but also added that construction costs can vary wildly from initial projections. “It’s important to note that those numbers change.”

The Fiscal Challenges draft lists a set of financing and procurement options to fund the Long Range Educational Facilities Plan. The options range from constraining funding with bonds and cash capital, which would require ACPS to only fund projects that fit within funding levels approved by the City Council, to raising taxes to support increased debt service payments for bonds supporting ACPS capital improvements. One of the proposed alternatives was a P3, a public private partnership, where the city and ACPS would transfer “some degree of control and responsibility for development and operation of a facility to be used by the public to a private entity.”

Wilson said the P3 model was briefly explored for construction at Jefferson Houston.

“An adjacent developer could build more density if they help with building the school, but it fell apart because neighbors had concerns about density,” said Wilson. “In each of these situations, the private developer gets something. There’s always a trade off. It’s always cleaner for the city to just open up the checkbook and build a new school. A public private partnership is a great opportunity to leverage development against new school capacity, but we have to do it right.”

Graf was more hesitant towards a P3 solution.

“Right now, we don’t have operational oversight for that model,” said Graf. “It doesn’t fit right now for our [schools and larger facilities developments], but it can be a good idea for outdoor space and fields.”

The modernization recommendations in the Long Range Educational Facilities Plan are derived from a joint City Council-School Board long-term enrollment forecast, which in previous years had been a topic of debate between the two bodies.

Having agreement on enrollment estimates, said Councilman Justin Wilson, who also served on the Long Range Educational Facilities Plan’s committee, is “huge. For the longest time we had disagreement between the city and the schools. And if you look at the numbers, we were both wrong. There is a student enrollment projection that the schools paid a consultant to do in 2005, and looking at long-term enrollment, they missed it completely. Their estimate is way under.”

Wilson said a series of tweaks to their formulas, mostly involving birth rate and cohort survival, a method of forecasting populations based on determining the survival of existing population and the amount of births. But Wilson acknowledged that the formulas aren’t a perfect.

“This is a highly transient area,” said Wilson, “there are a lot of kids who come in and out of the system during the year.”

The Long Range Educational Facilities Plan laid out a series of guidelines for new educational facilities. The plan establishes an 850-student maximum capacity for new elementary school facilities and a 1,200-student maximum capacity for new middle schools, though the guidelines also note that extensions can be built onto the buildings to exceed this capacity. These guidelines don’t apply to existing schools. According to a ACPS January 2015 monthly chart, John Adams Elementary School, with 1,002 students, and William Ramsay Elementary School, with 878 students, would exceed the elementary school guidelines. The Long Range Educational Facilities recommends placing a new elementary school on the western side of the city, as four of the western Alexandria elementary schools are projected to exceed 850 students by 2020. The plan also recommends considering a second school in the area if growth continues.