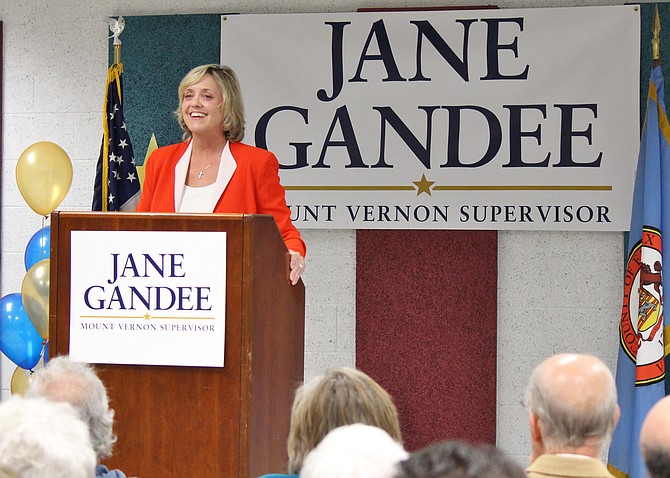 A hundred supporters were on hand April 23 as Mason Neck resident Jane Gandee announced her campaign to replace Gerry Hyland (D) as Mount Vernon representative to the Fairfax County Board of Supervisors. The event took place at the Mount Vernon Government Center.

Hyland announced earlier this year he would be retiring after 28 years in office.

“As supervisor, I will focus on creating a pro-business climate that will generate more jobs and better-paying jobs,” Gandee said in a statement. “I will work to implement solutions to reduce highway congestion and improve transit options which will reduce the amount of time Mount Vernon families spend on the road getting to and from work and play. We will also work together to enhance our communities so families can live safely, prosper and enjoy a great quality of life.”

Gandee, a West Virginia native, owns a ServiceMaster franchise located close to Richmond Highway and is vice president of the Mount Vernon-Lee Chamber of Commerce. She also serves as chairman of the Advisory Board of the Alexandria Salvation Army.

“Our property tax and stormwater tax bills will go up again this year while at the same time a majority of supervisors voted themselves an outrageous pay raise and many of our schools are falling behind,” Gandee’s statement continued. “Everyone I talk to agrees that we need a new direction.”