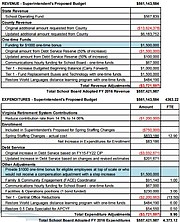 FY 2016 Arlington Budget, with Amendment A for one-time $1,000 bonus for eligible employees highlighted. Amendment A, and the rest of the FY 2016 budget, were adopted by the Arlington School Board on May 7.

Summary of revenue for the Fiscal Year 2016 Arlington Budget

While the Arlington School Board passed its budget without any debate or disagreement, funding cuts could have a substantial impact on local schools. The May 7 School Board meeting resolved the Fiscal Year 2016 budget, it also opened up a discussion of other issues facing Arlington Public Schools (APS) in 2016.

The board adopted its $557.4 million budget, a three percent increase over the $539.4 million budget. The superintendent originally proposed a budget of $561.1 million, with an additional $13.6 million funding transfer from the County Board. The School Board received less than half the requested funding increase, receiving a $6.2 million additional funding transfer from the County Board.

“Since the School Board adopted its proposed budget, there have been no changes to revenue,” said Deirdra McLaughlin, assistant superintendent for finance and management. “The reason the [$6.2 million additional funding] is not reflected is that our budget always assumes that the county will fill in the revenue gap.”

To compensate for the over $7 million funding gap, the School Board adopted cuts to Retirement System Contributions and implemented the first tier of Central Office Reductions, part of a three-tiered contingency plan if the School Budget gap was not financed by the County Board.

APS participates in the Virginia Retirement System (VRS) Defined Benefit program, where after five years of working in APS, the school system will pay into a retirement fund. This funding pool also includes APS funding towards life and health care insurance. The School Board’s adopted budget reduces the VRS contribution rate from 14.5 percent to 14 percent, a $1.2 million cut.

The Tier One reductions decrease the costs of a two-day conference for APS administrators. The cuts reduce funding for the speaker, diminish staff payment for services during the event, and eliminate professional reading materials. While listed as a Central Office reduction, the superintendent noted that this would not affect any APS staffing. The reductions to this conference save $10,000 and $39,000 in the eliminations of travel to other conferences for professional development. Tier One cuts also include reductions in funding towards classroom supplies and equipment.

The majority of the APS’ funding comes from a $451.6 million ongoing revenue transfer from the Arlington County Board. This marks a 4.49 percent increase over the $432.2 million transfer for FY 2015. APS is also funded by $64.5 million in state revenue, $12.3 million in federal revenue, $18.3 million in other local revenue sources, and $9.2 million carried over from previous budgets.

As part of the budget, the School Board approved an amendment for a one-time $1,000 bonus for eligible employees who are at the top of the pay scale or who would not receive a compensation adjustment with a step increase. The total cost for the one-time bonuses is $1.5 million, funded from $1.5 million in closeout reserve from one-time funding to a nearly identical program in 2014.

On June 4, APS staff will present the FY 2015 3rd Quarter Fiscal Monitoring Report, which assesses savings from FY 2015. Following this report, Murphy said that in July the School Board will address of pay and eligibility for salary increases for faculty who lost work days due to inclement weather.

But while the County Board voted unanimously in support of the budget and congratulated themselves and staff, parents at the May 7 meeting expressed concerns about the condition of APS schools as the 2015 school year comes to a close.

Klein said that her oldest son has already expressed concerns about not being able to take certain electives at the school.

While the School Board did not specifically address capacity issues at the May 7 meeting, at an April 30 meeting, Murphy spoke with Arlington parents and addressed capacity issues at South Arlington elementary schools and North Arlington middle schools. According to Murphy, APS is in the early stages of developing the new elementary school designated in the 2014 Capital Improvement Plan, but the project will not be completed until 2019 or 2020. In January, the School Board had proposed a project adjacent to the Thomas Jefferson Middle School, but the plan was rejected by the County Board.