Camping Out at Wolf Trap
Votes

Camping Out at Wolf Trap 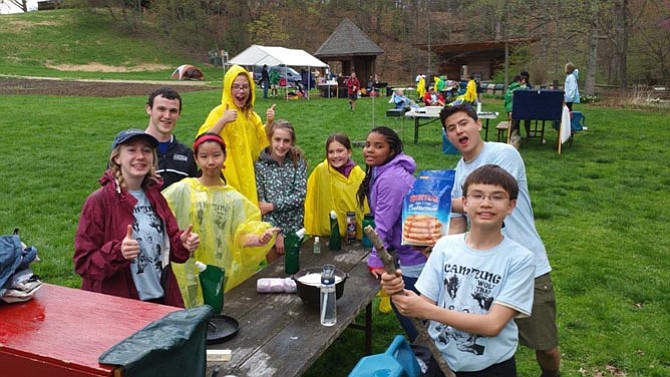 Some of the camp staff after the Spring 2015 event. 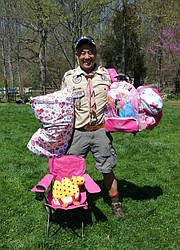 Camp Director Gary Pan with all of the pink camping equipment, in the colors of spring time.

Campers set up tents, cooked and cleaned up after their meals, and

participated in fun and educational events. Campers did plantings in the

built/maintained by PATC, and created and performed skits at the meadow pavilion. Campers also enjoyed s'mors at the evening campfire.

During a Wolf Trap back stage tour conducted by Ranger Will Rifenbark,

campers saw the back stage equipment used to put on a production, learned stage terminology, and a little history of the evolution of the technology of stage production. During this tour, the campers also witnessed a demonstration of robots built by youth leaders Heather Youmans and James Ye as participants in local robot building competitions.

Campers enjoyed learning about birds and birding from Jennifer Simms,

an Audubon Society volunteer, who taught them what to observe about a bird, how to use a bird book to identify the bird, what to listen for, and how to use binoculars to get a closer look.

Friends of Wolf Trap and PATC Wolf Trap trail overseers Mike Moran and Alan Day led a hike on the Wolf Trap trail around the Park especially the farm pond where campers could observe turtles, a water snake, and beaver lodge while honing their binocular skills.

performing Animal Antics where campers imitate an animal while other campers try to identify the animal.

Registration for the fall camp out scheduled for Oct. 9-10 (Fairfax