Wheeling Their Way to School
Votes

Wheeling Their Way to School 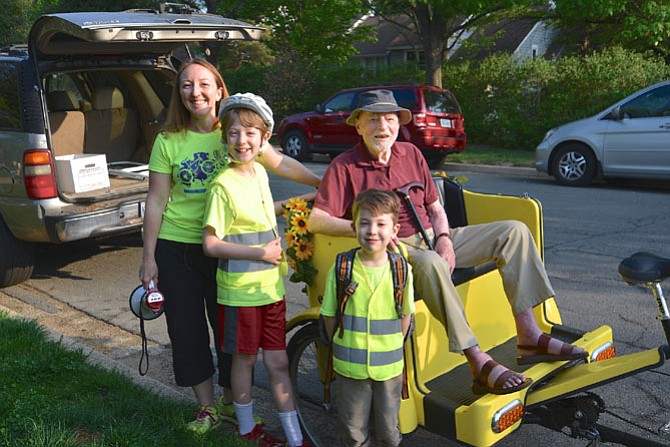 Melissa Romano, coordinator of the Lake Anne Elementary school’s Bike to School Day, with two of her children Kieran and Taric and Reston founder Robert Simon gearing up for the start of the event. Photo by Andrea Worker. 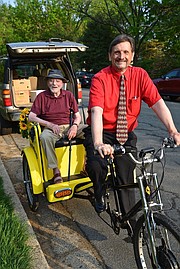 Getting ready to lead the Cyclists’ Parade: Reston founder Robert Simon was the honored Grand Marshall for the Lake Anne Elementary School’s participants in the International Bike to School Day event. In the spirit of things, Simon wheeled it from the gathering grounds to the school by the volunteered pedal power of pedicab owner Paul Walsh of Reston. When asked if he had a connection to the school, Walsh replied “No. I think I am just the only person with a pedicab in Northern Virginia! It’s a beautiful day and this is fun!”

Melissa Romano, mother of two students at Lake Anne Elementary School in Reston and one at Forest Edge, has been coordinating a monthly “bike to school” for about two years, but even she admitted that she had to up her game to organize Lake Anne’s participation in this year’s International Bike To School Day.

Romano’s monthly activity takes place on the first Friday of the month and began with a simple request by her son Kieran, asking if a few friends who lived a bit far away could rendezvous at their house for a joint ride to school. Apparently the friends so enjoyed their group ride that the next thing Romano knew “we had 50 bikes piled in the driveway, ready to roll!”

What was supposed to be a one-time affair or at most an occasional friendly two-wheel commute, became the monthly meet-up now known as the “Walk and Roll 2 School” gang, with parents joining in to walk or ride, some pushing strollers or walking dogs, after a bit of socializing and a cup of coffee to get things started. With all that momentum, Romano said it was the “natural next step” to become part of the international event that promotes a healthier way of getting to class and encourages neighbors getting to know one another as they accompany their kids to class.

Children, parents, teachers, and guests gather at the tennis court pavilion on Fairway Drive before participating in the 2015 International Bike to School Day to Lake Anne Elementary School. Many of the riders received free safety jackets, there were plenty of healthy refreshments, and the riders also were given official numbered cycling bibs.

THE LAKE ANNE contingent joined 91 area schools — including eight schools in Reston, 11 in Vienna and 33 in Arlington — that had registered their event with the organization Walk Bike To School, or with the Virginia Department of Transportation’s “Safe Routes to School” program. Safe Routes to School has been active since 2007, assisting schools and communities throughout the Commonwealth make “walking and biking to school a safe, convenient and natural activity.” The list of schools that participated from around the country is available on the website www.walkbiketoschool.org.

Born from the success of “Walk to School Day” which has been an international event since 2000, the cycling version came into being in 2012 in coordination with the League of American Bicyclists’ National Bike Month. Enthusiasm for the event is growing. In 2014, 2,200 schools registered as participants. This year the number grew to 2,389 and as the website notes, many schools don’t register, “they just ride!”

For the 2015 Lake Anne ride on May 6, the gathering in the fields alongside the tennis courts pavilion on Fairway Drive looked a lot more like a summer picnic than children grouping together to head off for school. It could be that the bagels provided by Einstein Brothers Bagels from Reston’s Spectrum Center, coffee from the neighboring Starbucks (to entice the adult supervisors) and fruit courtesy of Mom’s Organic Market in Herndon, helped paint that summertime fun picture. Whether it was the food or the chance to see friends while whizzing and whirling about that attracted them, there was an impressive crowd of youngsters willing to show up 30-45 minutes earlier than necessary on a school day.

A CADRE OF TEACHERS and staff from Lake Anne Elementary also showed up, including Principal Brendan Menuey and Assistant Principal Jana Griffith, joining special guests Del. Kenneth Plum (D-36) of the Virginia House of Delegates, and Reston founder Robert E. Simon who served as the Grand Marshall. Simon led the parade of cyclists in a cheerfully decorated pedicab, owned and, literally, operated by Paul Walsh of Reston.

If you haven’t participated in the past and don’t want to wait until next year to get in on the fun, check with your child’s school to find out if there are other bike/walk meet-ups like the one being hosted monthly by the Romano and the Walk and Roll 2 School clan. Visit www.virginiadot.org and search for Safe Routes to School Program for local information and the Walk Bike To School Website to get ideas and connect to others around the country.