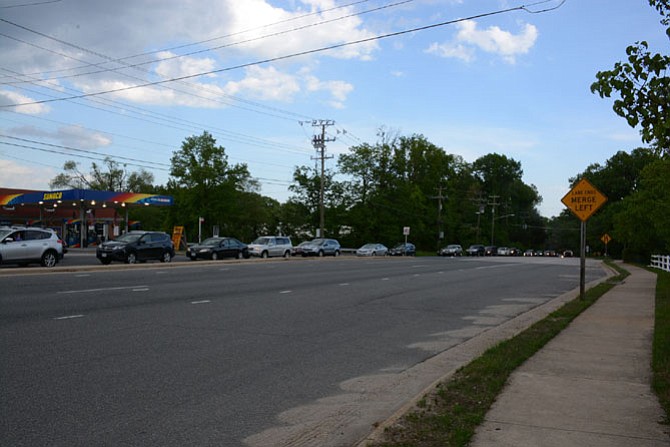 Cars heading northbound on two lanes of Rolling Road back up during a weekday evening rush hour. Photo by Tim Peterson. 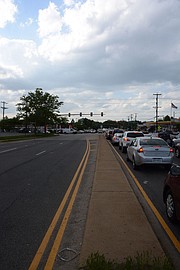 The future widening of Rolling Road could include a second turn lane on to Old Keene Mill Road.

For drivers frustrated with traffic on the two-lane stretch of Rolling Road between the Fairfax County Parkway and Old Keene Mill Road, relief could be in sight, again.

A project to widen Rolling Road “will save thousands and thousands of lost hours of people caught in traffic,” said Del. Dave Albo (R-42).

Several times in the past 20 years a plan has been in place to widen the road to four lanes, and several times funding has dried up. But with foreseeable financial commitments from Fairfax County, the Commonwealth Transportation Board and Northern Virginia Transit Authority. “We now have the funding to move the project forward,” said Supervisor Pat Herrity (R-Springfield).

Herrity and Albo lobbied the Northern Virginia Transit Authority after the organization’s recent list of funding priorities didn’t include the project.

“I don’t know how you explain the number four project in [Virginia Department of Transportation’s] congestion mitigation formulas being left off the plan,” said Herrity.

But eventually the project did get on the final Northern Virginia Transit Authority recommendation list, released in the past month. Fairfax County applied for $5 million, in addition to an application for $10 million from the Commonwealth Transportation Board in revenue sharing funding.

“In June, hopefully there will be at least $20 million going to the project,” said Karyn Moreland, section chief with Fairfax County Department of Transportation. That would include funding from the state and matching money from Fairfax County. Moreland first worked on the Rolling Road widening project as an engineer more than 20 years ago.

Though the $20 million wouldn’t cover the entire cost of the widening project, Moreland said the County committed to finding a way to fund it on Jan. 28, 2014, when the Board of Supervisors approved a six-year “Transportation Project Priorities” plan for funding about 220 projects through FY2015-2020.

Image courtesy of the Virginia Department of Transportation

This image shows a “Typical Section” from the previous plan for the widening of Rolling Road. The section plan is being revised to conform with updated design standards.

PRIOR TO THIS latest redesign, federal money was involved with funding the project, which Del. Albo said slowed and complicated the process.

“You have to follow all these extra special things, like a bike path,” said Albo. “They were very expensive and increased the size of the project — the width — dramatically.”

Any delays associated with funding were compounded by constantly updating regulations for stormwater management and other design standards. If construction hasn’t started on a new project, its plans must conform with all the most recent regulations and standards, according to Terry Yates with the Virginia Department of Transportation.

Yates is an Arlington & Fairfax Preliminary Engineering Manager, and works on funding for the Rolling Road project, scheduling and public outreach. Though Fairfax County is doing a lot of the fundraising, the Virginia Department of Transportation would manage the project, contract with the builders and execute the plan.

Some of the options being weighed by Yates’ office are “some sort of median-turn lane, trails, a sidewalk one side, a shared-use path on the other — consistent with the county’s plan for pedestrian connectivity,” he said. At this stage, the previous design must be vetted against the latest design standards to see how much of it can still be used.

One new element being considered for this most recent plan is a second turn lane from Rolling Road northbound on to westbound Old Keene Mill Road.

WIDTH IS STILL AN ISSUE for the widening and providing for pedestrian mobility, as many homes already sit close to the existing street.

“We’ll do our best to impact the properties the least amount possible,” Albo said.

“Last time we took a vote to see whether they wanted to keep front yards and put in on-street parking,” said Herrity. “Parking is important; we may go through that process again.”

Yates said he and other government officials have already been meeting with civic association leaders and members about the potential impact elements of the project.

As the project is still in its early re-design stages, Moreland said people “have plenty of time to voice their concerns.” She recommends getting in touch with either Supervisor Herrity or Del. Ablo, contacting Virginia Department of Transportation at 1-800-367-7623 or emailing her at karyn.moreland@fairfaxcounty.gov.