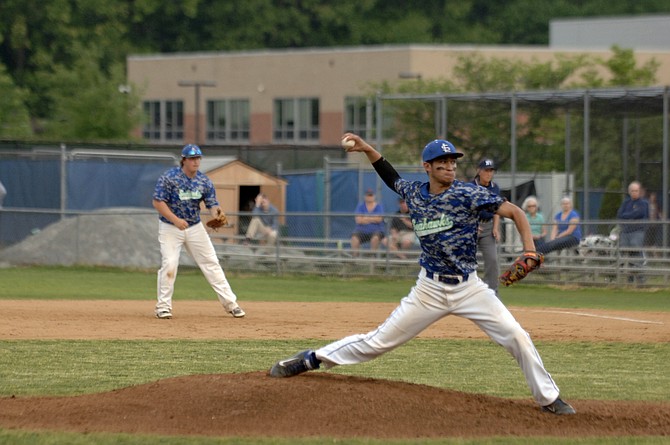 Matt Wojciechowski struck out 11 and helped the South Lakes baseball team earn its first regional berth since 2003 with a 3-1 victory over Washington-Lee on Friday in the Conference 6 tournament quarterfinals. Photo by Craig Sterbutzel.

In 2014, the South Lakes baseball team entered the Conference 6 tournament as the No. 2 seed and in prime position to end the program’s lengthy regional tournament drought, which reached all the way back to 2003.

But despite having standout Matt Wojciechowski on the mound during the quarterfinals, the Seahawks lost at home to a McLean team that caught fire during the postseason, eventually reaching the state tournament.

One year later, the Seahawks were back at home in the conference quarterfinals and Wojciechowski, now a senior, was back on the bump. The right-hander ran into trouble early against Washington-Lee on Friday, surrendering a solo homer to pitcher Teddy Herbert in the first inning, but Wojciechowski’s performance during the final six innings helped ensure South Lakes' season would continue.

Wojciechowski baffled the Generals, allowing just four hits while striking out 11 as the Seahawks earned their first regional berth in more than a decade with a 3-1 victory at South Lakes High School.

South Lakes, the No. 3 seed, will travel to face No. 2 Madison in the semifinals at 7 p.m. on Tuesday.

“At the beginning of the year we had two goals: make the regional tournament and win the [conference],” Wojciechowski said. “Goal one is accomplished and now on to goal two. It’s a great feeling and a huge win for our program in general.”

With the score tied at 1, W-L had runners at first and second with two outs in the top of the sixth inning with Herbert, who had already homered, at the plate. Wojciechowski got out of trouble by striking out Herbert, leading to a celebratory reaction from senior catcher Jared Abelson.

South Lakes took the lead with a pair of runs in the bottom of the sixth, and Wojciechowski finished off the Generals by striking out the side on 10 pitches in the seventh.

“We couldn’t ask for more,” W-L head coach Doug Grove said about having Herbert at the plate in the sixth inning. “He’s been our horse all season long. Right guy in the right situation. [Wojciechowski] made good pitches. … You saw what he was made of in the seventh inning – 10 pitches, nine for strikes.”

Wojciechowski surrendered a solo home run in the first inning, but allowed just three singles the rest of the game. He threw 89 pitches, including 65 for strikes, and did not walk a batter.

“In baseball you have to have a short memory because that can happen all the time,” Wojciechowski said about giving up the first-inning homer. “After that I was like, ‘I’m bearing down, they’re not scoring again.’ … On the mound I’m a bulldog and if I say I’m going to do something, I’m going to go out there and do it.”

W-L didn’t lead for long as Abelson tied the score at 1 with a two-out RBI double in the bottom of the first. The senior catcher finished the night 2-for-3.

“We all knew that one run wasn’t going to win this game and it turned out true,” Abelson said. “When I hit that double I think it just sparked a little … swagger. We were probably pretty nervous coming in --- win one game and we go to regionals for the first time [since 2003].”

The score remained tied until the bottom of the sixth, when Herbert walked South Lakes first baseman Kyle King with the bases loaded, forcing in what proved to be the game-winning run.

Two batters later, with two outs and the bases still loaded, South Lakes center fielder Jonah Goll added an insurance run with a straight steal of home, sliding in just under the tag.

“It was just kind of the situation,” said first-year South Lakes head coach Morgan Spencer, who was a Herndon assistant last season. “We try to cover every aspect of the game and that’s something that we work on. We just felt that [Herbert] was pretty focused on the batter at that point in time and felt if we could get to a certain point down the line that we were going to take a shot. Jonah saw it and went. Worked out perfect, obviously.”

Pinch hitter Johnny Micka and shortstop Marty Gryski each had a single for South Lakes. Second baseman Will Burgess had two hits for W-L, and first baseman Cameron Anderson had one.