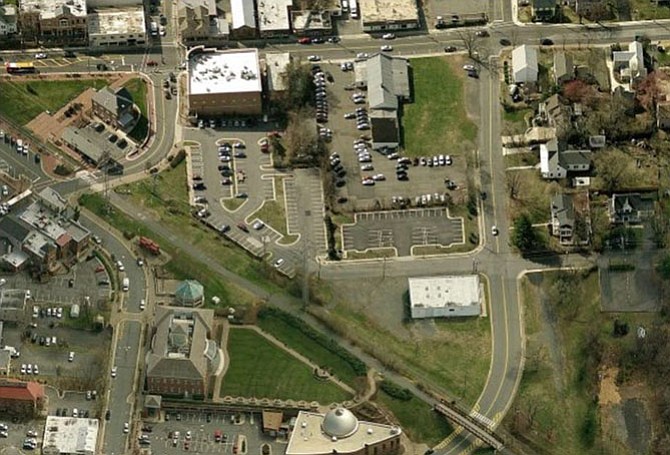 Herndon officials announced the Town Council will consider on May 26 the purchase of 1.67 acres of land in Herndon’s historic downtown. Combined with about three acres already owned by the town, the purchase will clear the way for a comprehensive development project, in accordance with a master plan adopted by the Town Council in 2011, according to a statement from the town government.

Herndon is home to 23,000 residents, making it the third largest town in Virginia. While it retains a small town feel, introduction of Metro’s Silver Line, likely in 2020, is promoting a development push from the outskirts to the historic center. The town’s master plan envisions a mix of retail, office and residential development, and an arts center. The plan includes a parking garage that will replace the existing spaces and provide parking for the new uses.

THE COUNCIL has scheduled a public hearing on Tuesday, May 26, on an ordinance to approve the contract to buy the downtown parcel. All public hearings begin at 7 p.m. at the Herndon Council Chambers, 765 Lynn Street. If the contract is approved by the council, the town will purchase the land from Ashwell LLC for $3.5 million, the statement said. After an environmental assessment, the town expects to close on the purchase within 120 days.

"Acquiring the Ashwell property will give the town the chance to redevelop according to our master plan, and allow the greatest opportunity for the kind of cohesive development town residents have said they desire,” stated Mayor Lisa Merkel. “The frontage on Elden and Center Streets, coupled with assembling both parcels gives us flexibility for more open space, parking and outdoor dining."

The 1.67 acres would be rezoned in conformity with the adjacent town-owned property, which allows for mixed-use commercial and residential development. This will result in nearly five acres of downtown land available for private development, according to Herndon officials. “The Town of Herndon has been envisioning a comprehensive redevelopment in our downtown for decades,” Mayor Lisa Merkel said in the statement.

“Until this purchase, however, we have been limited in our ability to effectively position downtown Herndon for comprehensive redevelopment, as much of the necessary land was under private ownership,” said Merkel. “This agreement will allow us to move forward toward development that celebrates our rich history while embracing our limitless future.”

Town officials expect to issue a solicitation to developers by year’s end, the statement added. The master plan envisions a mix of retail, office and residential development, to include four-story mixed-use/residential structures; three-story mixed-use/commercial structures; a public/private parking garage; an arts center and more. The planning process for the downtown master plan began in 2009 and has included a steering committee, the Planning Commission and Town Council and a lot of feedback from the community, including from meetings and via email, phone calls and letters to the town.

THE TOWN has invested just under $5 million, $2.87 million of which was obtained through federal and state grants, in infrastructure to move utility lines underground. It’s also upgrading streetscapes throughout the downtown, the statement said. Development currently under way in downtown Herndon includes the construction of 17 single-family homes at Center and Vine streets, and plans for mixed-use development (townhomes, condominiums and retail space) at the corner of Elden and Monroe streets.

The Downtown Master Plan resolution, as well as renderings of the plan are available for review at www.herndon-va.gov, “Planning/Zoning.”