Last Piece of the Downtown Puzzle for Herndon?
Votes

Last Piece of the Downtown Puzzle for Herndon?

Council schedules public hearing on potential purchase of Ashwell property for Tuesday, May 26 at 7 p.m. 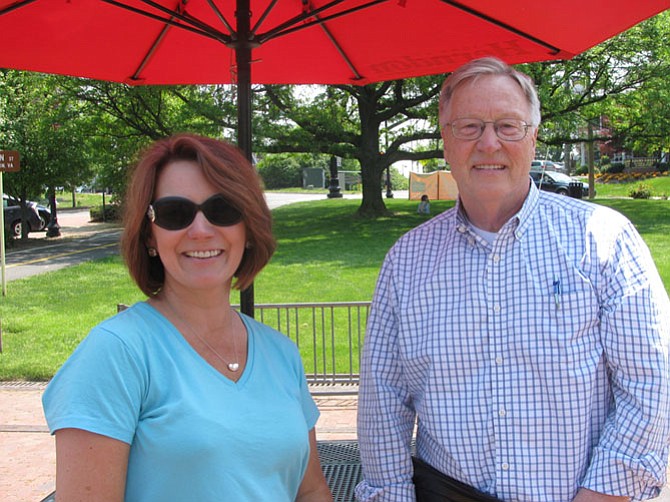 Mayor Lisa Merkel and Director of Public Works Robert B. Boxer walk the downtown area, showing improvements and plans in the works. Photo by Ken Moore.

“What I’m hearing is people are ready for this,” said Mayor Lisa Merkel, who called this a priority when she was campaigning to be on the Town Council.

The Herndon Town Council will hold a public hearing on an ordinance to approve the contract on Tuesday evening, May 26 at the Herndon Council Chambers at 765 Lynn St. at 7 p.m.

Undergrounding wires and red brick sidewalks wide enough for wheelchairs and strollers are just two of the aesthetic improvements Herndon has elected to fund. The Town of Herndon gives residents the opportunity to track progress on the downtown projects on its website www.herndon.va-gov.

HERNDON WILL PURCHASE the land from Ashwell, LLC for $3.519 million if the Town Council approves the project to add to the three acres of downtown land it already owns.

“For years, people have said it would be great if we could incorporate the Ashwell property into our downtown plan,” Merkel said.

Following an environmental assessment, the town expects to close on the purchase within 120 days, according to Town document.

The land will then be rezoned in conformity with the adjacent town owned property, which allows for mixed-use commercial and residential development. Completion of these processes will result in nearly five acres of town-owned land, available for private development, according to Town documents.

The town anticipates that an open solicitation to developers will be issued by year’s end.

The town has invested just under $5 million, $2.87 million of which was obtained through federal and state grant funding, to facilitate undergrounding of utilities and is completing streetscape upgrades throughout the downtown.

Developments already under way include construction of 17 single-family homes at Center and Vine streets, and plans for mixed-use development (townhomes, condominiums, and retail space) at the corner of Elden and Monroe streets.

“The Town of Herndon has been envisioning a comprehensive redevelopment in our downtown for decades,” according to Merkel. “We made significant strides toward that vision by adopting our Downtown Master Plan.”

“Until this purchase, however, we have been limited in our ability to effectively position downtown Herndon for comprehensive redevelopment, as much of the necessary land was under private ownership,” Merkel said.

The Town of Herndon gives residents the opportunity to track progress on the downtown projects on its website www.herndon.va-gov.