Community reacts to County Board’s vote to allow Reevesland Farmhouse to be sold. 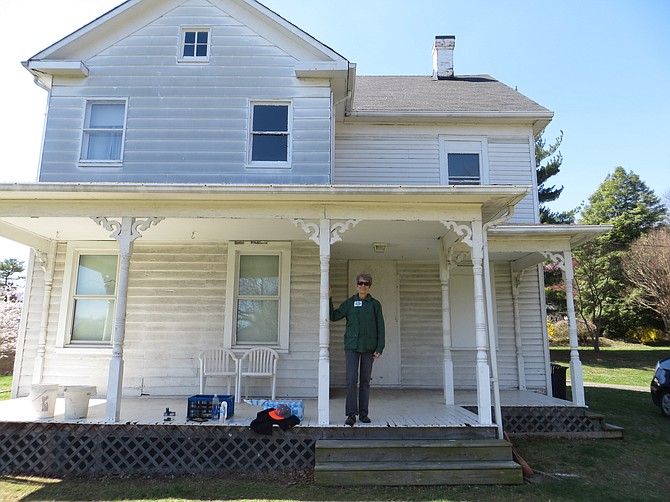 Joan Horwitt on the front port of Reevesland. Photo by Vernon Miles.

In a way, Joan Horwitt, head of the Reevesland Learning Center, is getting what she hoped for. Fourteen years after purchasing the Reevesland property and allowing it to fall into disrepair, the County Board is taking action. But instead of dedicating $2.5 million in necessary renovations to the farmhouse to turn it into a public space, Horwitt was surprised on May 18.

The County Board would be voting to sell the property.

Originally built in 1865, the Reevesland farm was the last dairy farm in Arlington. When its owner, Nelson Reeves, died in 2000, his three children sold the property to the county for $1.8 million. It was turned into a historic district in 2004, but has since sat empty. In 2014, the county funded $500,000 towards the building’s restoration, but the project was abandoned when an inspection of the site revealed more extensive damage requiring a $710,000 re-stabilization of the building foundation. In a 3-2 vote in favor at its May 19 meeting, the County Board voted to authorize County Manager Barbara Donnellan to separate the farmhouse from the surrounding property and begin the process of selling the building to a private owner.

According to Lisa Grandle, Arlington County park development division chief, the sale would come with certain restrictive stipulations. The property owners would not be able to subdivide or sublet the home to renters. Any external additions to the house would require approval from the Arlington Historical Affairs and Landmark Review Board. Sale of the home would require approval from the County Board. Additionally, if the property owners restore the building to a residence, the property would need to undergo renovations, though Grandle says the code changes would not be as extensive as requirements the county would be forced to finance if the property were restored as a public park. Grandle praised the work of groups like the Reevesland Learning Center, but said the organization hadn’t put forward any substantial financing towards the building’s renovations.

“The Reevesland [Learning Center] is willing to put in the sweat equity,” said Grandle, “but this is going to take work done by professional contractors.”

Nancy Iacomini, vice chair of the Planning Commission, said that she believed the property’s sale to a single-family would be its own restoration of the building’s legacy.

“Sometimes preservation can best be accomplished by a partnership wherein [the property] is sold to someone else who can then actually restore and live in the building,” said Iacomini. “It gives it life again. That’s the case here.”

While the sale of the property would have to be approved by the Arlington Historical Affairs and Landmark Review Board, the board’s chair Joan Lawrence spoke in favor of the sale. Lawrence lives in a home protected as a historic site and said the process for making any external changes is rigorous. Like Iacomini, Lawrence said she believes the building’s sale to be preferable to the current condition.

“It’s important that this house be alive and a living example of preservation instead of just being mothballed,” said Lawrence.

But the sale, both in concept and process, was vocally opposed by members of the nearby community.

“I have lived in the county for 40 years,” said Horwitt. “I have never heard of a county proposal that is more out of step with the Arlington community or is such a hurtful slap in the face to Arlington kids and adults than the unwarranted and secretive proposal to sell the beloved historic Reeves Farmhouse.”

Horwitt works at the property with the Reevesland Learning Center, an organization that manages a set of garden beds located on the property used to educate local school children about farming and ecology. While the garden beds will be maintained as public property with the farmhouse’s sale, Horwitt also regularly uses the front porch of the building as a teaching area. Horwitt described sitting on the front porch of the building with children looking out across her favorite part of the days when local students visit the site.

“[Arlington children] have fallen in love with the spirit and history of the farmhouse,” said Horwitt. “When they sit on the porch, we have lessons in Arlington history. They often asked ‘when can we go inside?’ The answer you’re thinking about giving them is ‘never.’”

While the county boardroom was packed full of supporters of the Reevesland Learning Center during the March 24 public hearing on the budget, only six showed up to speak at the sale. Horwitt said a large part of this was likely because the County Board had only given 24-hour notice before the vote.

Peter Fallon, who is running for the Democratic nomination for the County Board, spoke at the May 18 meeting as a private citizen against the sale. In particular, Fallon said the short notice on the vote was particularly suspicious.

“Transparency is generally something we do practice in Arlington, but care has to be taken [because] that transparency is being compromised,” said Fallon. “One day’s notice is legally sufficient, but it doesn’t send the right notice to the community, nor does it instill confidence.”

The public outcry against the sale found some support on the County Board.

“This proposal has had 24 hours in the community,” said County Board member Walter Tejada. “This should be a public process. I think the community has a point, they haven’t had time to react.”

Ultimately, however, the County Board voted to approve the property’s sale.