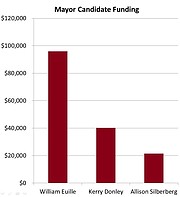 While the race for the Democratic primary in Alexandria’s mayoral election remains hotly contested, incumbent William Euille remains the clear winner in terms of fundraising.

Euille also received a $2,500 donation from Austin Flajser, the president of Carr City Centers and, according to the Carr website, head of day-to-day operations at Carr Hospitality. Carr Properties owns several buildings near the King Street Metro and was recently at the center of a battle between the city and local citizens regarding a planned hotel at 220 S. Union St. The conflict ended in a lawsuit that went to the Virginia Supreme Court, which ultimately ruled in the city’s favor.

In addition to the funding from Perpetual Realty East, Land of Opportunity, and Jack Taylor Toyota, Donley has received $1,000 from Carson Lee Fifer Jr., a local land use attorney, and David Speck, a financial advisor at Wells Fargo and former city councilman from 1991 to 2003.

Trailing in the fundraising race is Silberberg, whose largest donation is $1,948 from her 2012 City Council campaign.