Alexandria: What’s Next For Patrick Henry?

Schools and Parks Department proposals each stalled by the other. 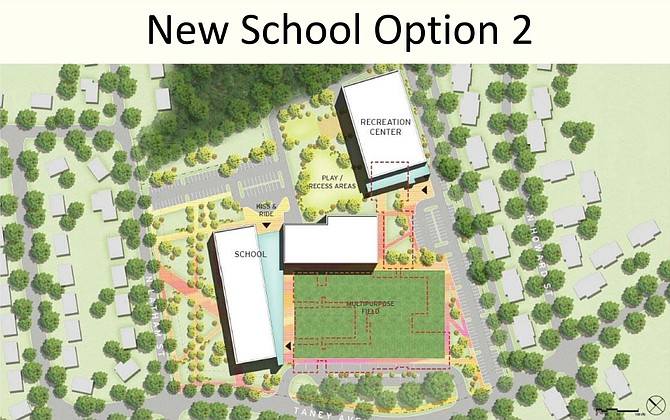 Alexandria Public Schools’ plans to rebuild Patrick Henry Elementary School around the location of the current site have hit a snag. While a feasibility study presented the School Board with four options for development at Patrick Henry Elementary School, none of the plans could make use of the land around the Patrick Henry Recreation Center at the corner of the site. Meanwhile, at the same location, the Alexandria Department of Recreation, Parks, and Cultural Activities has encountered its own snag in its project to redevelop the Patrick Henry Recreation Center. Neither group knows what the other is planning.

The School Board will vote on a final Patrick Henry project recommendation at its June 11 School Board meeting. However, the Department of Recreation, Parks, and Cultural Activities doesn’t present its options for recreation center until the June 23 City Council meeting, so the Patrick Henry redevelopment has to plan for the recreation center taking up the maximum amount of space on the site.

In two School Board meetings on May 19 and May 21, the School Board held work sessions surrounding the receipt of a feasibility study for Patrick Henry Elementary redevelopment. While four options were presented, the School Board almost unanimously favored Option 2, which adds two new school buildings to the site while students remain in the current location. The current building was opened in 1953, with the latest major addition to the site in 1995 when eight classrooms were added. In Option 2, once the new buildings are opened, the old school will be demolished and converted into a multi-use field. Patrick Henry Elementary, currently a pre-K through 5th grade program, has 596 students. Option 2 will convert the new school to a pre-K through 8th grade facility with a maximum capacity of 800 students. Option 2 is estimated to cost $38.5 million.

However, this plan has drawn criticism from nearby neighbors for adding a parking lot and drop-off point onto the two-lane residential North Latham Street.

“The parking lot is a problem,” said resident Liz Parker, whose home is directly across from the proposed entrance. “The current plan routes traffic through the neighborhood.”

Mary Biegel, also a nearby resident, referenced the Alexandria City’s Major Thoroughfare Plan and Comprehensive Transportation Master Plan. In these, Latham is classified as “local or residential,” and the Master Plan states that cut-through traffic should be discouraged.

The neighbors found support on the School Board, many of whom said they agreed with neighbors’ concerns regarding traffic on the site.

“This is what makes me concerned to support Option 2,” said School Board Member Kelly Booz. “I’m concerned if we move along with Option 2, if we come back and say ‘well we have to use Latham Street,’ then we aren’t doing enough for the community based on the requests they had. That’s a sticking point that’s making it really hard to support this.”

“Why is the School Board moving forward with this in advance of the city making any decision on the recreation center?”

School Board members proposed a variety of solutions, including a traffic loop around the facility, but each plan involved using space nebulously classified as the “Patrick Henry Recreation Center.”

“The [parking lot and entrance] could change,” said Clarence Stukes, chief operations officer for ACPS, “but the building then lays itself out differently when you change the major portions of the site and the building doesn’t fit in the site.”

School Board members expressed frustration over the limitations on construction options.

“I want to know why we’re looking at a recreation center this size when the city isn’t even going to get a look at what’s going to happen here until the middle of June,” said School Board Member Patricia Hennig. “Do we really have to plan on something this humongous?”

The recreation center was added to the school site in 1973 and has primarily offered after-school care to students at Patrick Henry Elementary. While the Patrick Henry Recreation Center redesign was first proposed in 2008, the last public information on the project was an October 2008 Public Hearing; $6.9 million was set aside for the Patrick Henry Recreation Center redevelopment in the City’s FY 2016 Capital Improvement Program. James Spengler, the director of the Alexandria Department of Recreation, Parks, and Cultural Activities, said that his department will give the community whatever they can out of the facility for that cost.

“The recreation center responds to the school,” said Spengler. “Where they decide to locate their buildings and how big they decide to be, we base our building off of that.”

Sengler said the size of the recreation center will be determined at the City Council meeting to fit the intended “market area” set by the council.

“There’s no decision on square footage yet,” said Spengler. “Council has to decide if this is going to be a community serving, or neighborhood serving, or city serving center.”

Some on the School Board questioned the decision to vote before the recreation center plans are presented to City Council.

“Why is the School Board moving forward with this in advance of the city making any decision on the recreation center?” asked School Board member Marc Williams.