Looking at the Alternatives
Votes

Looking at the Alternatives 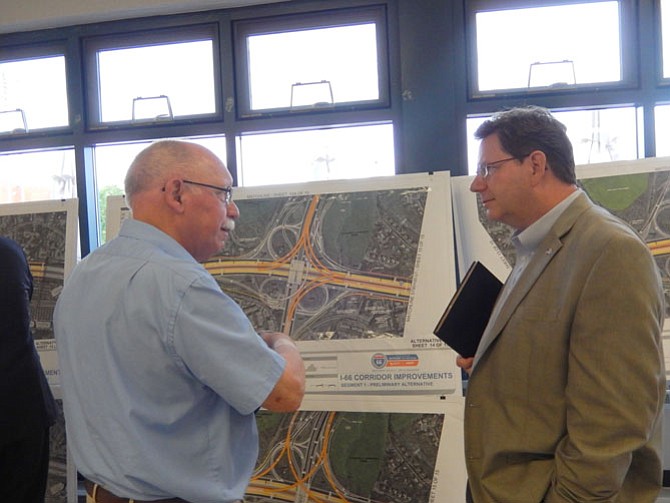 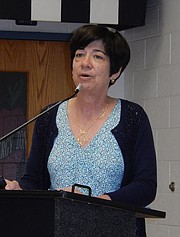 One day, in the not-too-distant future, the I-66/Route 28 interchange in Centreville will be improved to reduce congestion and make life easier for every driver using it. But first, VDOT and area residents are deciding how best to proceed.

Toward that end, Supervisor Michael R. Frey (R-Sully) hosted a VDOT informational meeting on Monday, May 18, at Stone Middle School. Attendees learned about three alternatives and saw maps illustrating each one.

“Early last spring, we had a public-information meeting about I-66/Route 28 and got good feedback,” said Frey. “I-66 is also being looked at, and both projects were merged. VDOT’s worked with Fairfax County staff and my office, and I wanted communities living near the interchange to learn about the project before [VDOT’s upcoming I-66] public hearings.”

“We all want transportation improvements, but with no impact to our communities,” he continued. “We want change — but to the other guy. But change is going to happen in Centreville, and I believe it’ll be positive if it moves traffic and lets our communities continue to function as they do.”

VDOT Project Manager Susan Shaw said I-66 improvements are needed because this heavily used thoroughfare is constantly plagued with congestion issues and accidents. “We want people to have more mode [of travel] choices,” she said. “And we want to reduce cut-through traffic when I-66 is clogged and enhance transportation safety and travel reliability.”

In VDOT’s Tier 1 environmental-impact study, she said, engineers examined 10 possible improvement concepts, as well as spot improvements and chokepoints, such as I-66/Route 28. They then decided I-66 should have two express lanes and three regular lanes in each direction. The express lanes would be free to buses and HOV-3 vehicles. Non-HOV cars would pay tolls based on congestion. The regular lanes would be free and open to all traffic. There’d be ramp-to-ramp connections of auxiliary lanes, plus rapid bus service and other multimodal improvements.

VDOT ultimately created two alternatives — one including Metro extension and one without it. Also being considered is a bike trail along I-66. “Since the last meetings in January, we’ve reduced the number of residential relocations from about 35 to 11-15,” said Shaw. “And noise walls are now shown on the plans online.”

For the I-66/Route 28 Interchange, three alternatives are proposed:

Regarding the I-66 outside the Beltway project as a whole, VDOT will hold a public hearing Wednesday, June 3, from 5:30-9 p.m., in the cafeteria of Bull Run Elementary, 15301 Lee Hwy. in Centreville. Residents may view project maps, listen to a presentation at 7 p.m. and provide their comments on what’s proposed.

“During the summer, we’ll look at the EIS results, gather public input and develop the proposed alternative,” said Shaw. “And next year, we’ll have another meeting on the proposed design. We’d like construction to begin in 2017; it should take four to five years and be completed in 2021.”

She said VDOT representatives have been meeting with various homeowners associations and will be glad to speak to more. She also noted that people may post comments on the website, Transform66.org, through June 18.

The entire project is estimated to cost $2.1 billion, with the I-66/Route 28 interchange alone anticipated to have a price tag in the hundreds of millions. Shaw said the I-66 construction project is not yet funded, but toll revenues are expected to yield about $1 billion toward its funding.

“We know this Route 28 Interchange is an important project, so we’ll have the contractor meet some early improvement goals,” she said. “[The work] also could move forward in a phased approach. There’s nothing precluding the Route 28 project from being done first — especially in the area of Braddock and Walney.”

A female resident told Shaw the “quality of life in Centreville has gone down in the past 10 years because people build first and add roads later. Drivers cut through on Braddock and Stone roads and the traffic is frustrating.”

Agreeing, Joann Townsend of Sequoia Farms said, “I work seven miles from home, and the last two-and-a-half miles on Route 28 take 30 minutes. I could get out and walk faster.”

However, Rob Prunty, with VDOT’s I-66 team, said, “Our studies show that the volumes of cut-through traffic will decrease if the project is built. We’re forecasting noticeable changes in your travel times.”

And local residents are hoping that proves true. “I call Centreville ‘U-turn-ville’ because now people are making illegal U-turns at the Route 28/Braddock Road intersection — where there are four, ‘No U-turn’ signs,” said Sharon Vitner of the Newgate community. “And they’re impeding traffic making right turns [from Route 28] onto Braddock.”

Sully District Transportation Commissioner Jeff Parnes also has some concerns. “Northbound Route 28 traffic should be able to get on I-66 westbound without having to cut through Centreville on Route 29 or other streets, as it does now,” he said. “And eastbound I-66 traffic should be able to get onto southbound Route 28 at the interchange, instead of taking Route 29 and going through all the [traffic] lights.”

Furthermore, said Parnes, “They’re trying to minimize the impact on E.C. Lawrence Park. But I think they should condemn some of the park, if necessary, and provide it with land elsewhere so this interchange can be built to maximize its use.”

As for rapid transit, he said VDOT is showing transit lanes west from Vienna on I-66 in the median. “I recommend that, until rail is built, they use bus rapid transit that runs on a regular schedule so there are always buses going east and west to and from the subdivisions,” said Parnes. “That way, people could always have a ride and the buses wouldn’t be just partially full.”