’Chaotic intersection’ at Center and Elden finally to be improved. 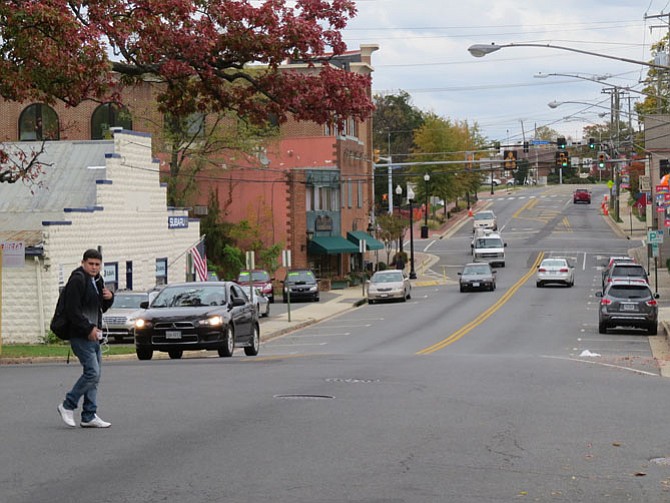 A $2 million project to make intersection improvements at Center and Elden streets are scheduled to begin in Spring of 2017. Photo by Ken Moore. 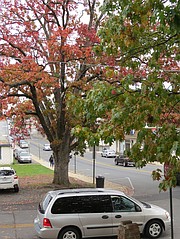 The Town of Herndon will sacrifice the red oak by the former Ashwell property in order to make safety improvements to the intersection.

Town Councilmember Sheila Olem goes out of her way to avoid the intersection at Center and Elden streets.

“I don’t even try to go through that intersection, it’s just too dangerous, the way it’s aligned,” Olem said.

Since 2009, an average of six reported accidents take place at the intersection each year.

“It’s absolutely a chaotic intersection. I go down and get the light at Grace,” said Olem.

By a 6-1 vote last Tuesday, Oct. 27, The Town Council approved design improvements for the intersection that will include wider sidewalks and shorter walks across the street for pedestrians, left turn lanes to improve through traffic on Elden, synchronized lights and more sight distance for turns.

“This is a decision that is going to be with us for many years to come,” said Vice Mayor Jennifer Baker. “Overall, this is a well thought out plan to dramatically improve this intersection.”

THE PROJECT will cost approximately $2 million, funded half from VDOT. Construction is scheduled to begin in spring 2017.

Intersection improvement has been part of the Town Capital Improvement Plan since 2000.

The concept for a signalized intersection began in 1988 with the Historic Herndon Downtown Streetscape Project. A traffic signal was installed in 1992 at Grace Street for safety of children going to Herndon Middle School.

“Since I moved to town in 1990 this has been a subject because this intersection is kind of convoluted,” said Olem.

“I’m looking forward to this,” she said. “I think this is much needed to make our downtown safer for our pedestrians as well as our bicyclists and the motorists.”

Bob Boxer and the Department of Public works presented the Council with three options for design improvement in May. They presented citizens with the designs in July. About 15 citizens submitted written feedback; the majority agreed with the one selected by Council.

During summer months, many pedestrians and motorists navigate the intersection on their way to Friday Night Live and “a lot of folks are confused by that intersection because it just doesn’t work,” said Wolf. “Safety is our primary concern at this intersection, and it’s really problematic.” 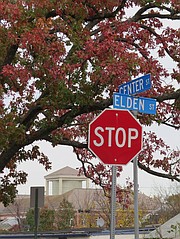 LEFT TURN LANES will get signalized, which will open up the flow on Elden Street, said Boxer.

Councilmember Steve Mitchell made the dissenting vote. “I know we need to do something about this intersection,” he said. “I’m glad we’re looking for the solution, but I don’t believe we’ve found it yet.”

Mitchell took a tape measure with him Tuesday afternoon to the streets to do his own traffic study. “The tape measure doesn’t lie,” he said. The plans are too tight for busses, he said.

“It you kiss the curb, you will be bumping the through lane,” he said. “Look up the average bus size.”

Councilmember Dave Kirby said, “They’ve already done the right experiments to do that.”

The Council approved the plan by a 6-1 vote.

The post oak tree in front of The Church of Jesus Christ won’t be affected, but the Council had to sacrifice its neighbor, the red oak at the corner by the old Ashwell Property for the improvement project.

“I love that tree,” Mitchell said in May, when the Council first heard the options.