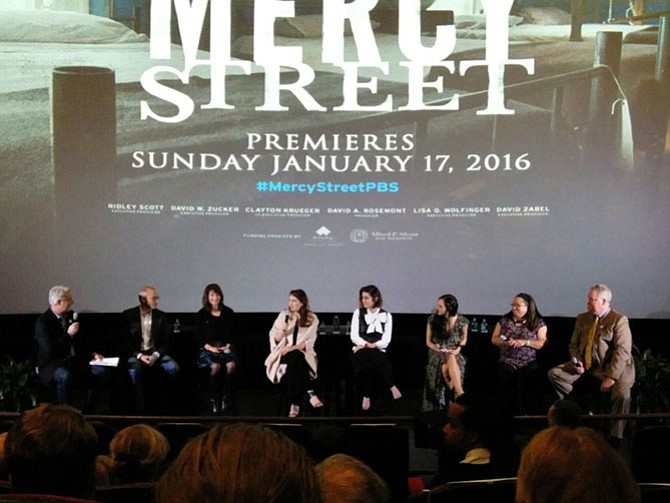 Actress Tara Summers, fourth from left, talks about her experience during the filming of Mercy Street following a screening of the Alexandria-based Civil War drama Nov. 5 at the AMC Hoffman Theaters. Summers was joined by other cast members, PBS producers and Historic Alexandria staff during the Q&A session following the premier, which kicked off the Alexandria Film Festival. Photo by Jeanne Theismann.

Craig Fifer, left, director of communications for the City of Alexandria, poses for a photo with a Civil War reenactor at the premier of Mercy Street Nov. 5 at the AMC Hoffman Theaters.

Actresses and producers from the Alexandria-based PBS series “Mercy Street” walked the red carpet prior to a screening of the Civil War-era drama to kick off the Alexandria Film Festival Nov. 5 at the AMC Hoffman Theaters.

The drama follows the lives of two volunteer nurses on opposing sides of the war — New England abolitionist Mary Phinney (Winstead) and Confederate supporter Emma Green (James) — and is inspired by memoirs and letters from real doctors and nurses from that time. It takes place in a luxury hotel-turned-hospital in Alexandria, the longest occupied Confederate town during the war.

“What a wonderful, historic town,” said Summers after touring some of the Alexandria locations featured in the series, which was filmed in Richmond and Petersburg. “I am from Britain so much of this Civil War history is new to me. But I am glad to experience for myself the city where ‘Mercy Street’ takes place. It is an exciting project and I am thrilled to be a part of it.”