Centreville: Vignettes of All Stages of Love
Votes

Centreville: Vignettes of All Stages of Love 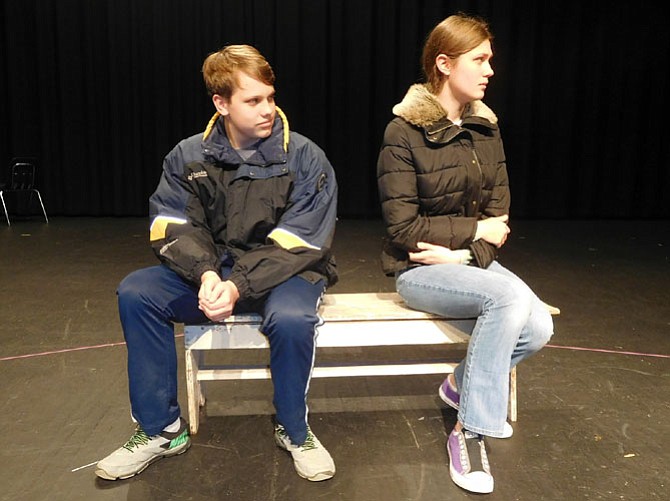 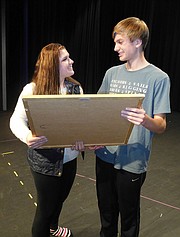 Caroline Collier and Andrew Dettmer enjoy looking at a painting together as Rhonda and Dave in “Almost, Maine.”

A series of distinct vignettes that together work as a whole — that’s Centreville High’s upcoming play, “Almost, Maine.”

“There are nine scenes about falling in and out of love,” said Director Mike Hudson. “It’s an interesting journey through all stages of love. The characters talk about past love, love that might have been, love that’s being newly discovered and a love that’s ending.”

Calling his cast “young, but talented,” he said this play gave him the opportunity to pair up people who might seem like surprising pairs on the surface, but who work well together. So, said Hudson, “It’s been a strong lesson in personal relationships for the actors.”

There’s a cast and crew of nearly 30, rehearsing since September. And on Monday, they got to meet the playwright, John Cariani, to learn his intentions toward the characters he wrote. “The stories are real and believable,” said Hudson. “And many are about things the audience either has experienced, or will, at some time in their lives.”

The show unfolds in modern day and, even though it deals with the concepts of adult, emotional love, said Hudson, it’s appropriate for families. However, people ages 13 and up will enjoy it more than young children.

“Two scenes will happen inside someone’s home, but the majority of the play takes place outdoors,” he said. “And I think the audience will really like our tech work. We’ll have an LED, star curtain covering the entire upstage area, and it’ll even snow.”

Junior Elizabeth Todd portrays Marci. “She’s fed up with her husband, Phil, who forgets a lot of things, and it gets to be too much for her,” said Todd. “She’s a serious person; she can have fun, but is mostly strict and by-the-book.”

She said it’s interesting playing Marci because “I really have to gather from my own experience to pull the anger I need to play her in this scene. Each person has his or her own scene, usually with just one other person, so they can really focus on their acting.”

Since this show is a dramedy, Todd said, “The comedic parts are a highlight. Things get so abstract that the audience will really enjoy the concept of the story. Plus, the title of each scene has a double meaning, and people will like figuring it out.”

Playing Rhonda is senior Caroline Collier. “She’s a tomboy and is friends with Dave [played by Andrew Dettmer],” said Collier. “He wants to take their relationship to the next step, but she’s hesitant. She’s super-outgoing when hanging with a group of guys. But when she’s alone with Dave and he tries something with her, she doesn’t know how to respond and is socially awkward about it.”

Collier said she “absolutely love(s)” her role. “It’s a challenge for me because I’m girly and preppy, so Rhonda’s out of my comfort zone. But I love working with Andrew because he’s such a phenomenal actor and he really makes me want to be a better actress so I can keep up with him.”

She said every scene brings something new, and every actor and actress chosen for each scene “fit so well that the audience won’t want it to end and will be begging for more. And even though each scene has different people, the characters will be mentioned in other scenes so they’re all tied together.”

Dettmer, a sophomore, describes Dave as a young man attracted to Rhonda, but “a bit awkward about telling her how he feels about her. They’ve always been friends, but he wants to be romantically involved with her. He takes art classes and even makes a painting for her.”

The role lets Dettmer expand his acting abilities, so he’s enjoying it. “I don’t relate to Dave because I’m just a 10th-grader and haven’t experienced that level of romance, yet,” he said. “But I have the fun and freedom to explore a romantic character that’s in a play and isn’t real. Yet, as actors, we try our best to make it seem like it’s really happening and these events are actually taking place.”

“The characters are really be fleshed out, so the show’s very character-driven and the audience will like getting to know them,” he added. “And they’ll also love our special effects.”

Classmate Paul Anderson portrays Daniel Harding, who has an unsettling encounter at his home. “A lady comes to his door and says she likes him,” said Anderson. “But because it’s dark and it’s been years since they’ve seen each other, she mistakes him for a stranger and doesn’t recognize him — but he recognizes her.”

Anderson said his character’s a “good guy, but he’s a little depressed because, years ago, that woman refused his marriage proposal. I enjoy playing him because “he has multiple lines and I get to be in a pretty funny scene.”

He said this show is “a nice beginning to the winter holidays because it takes place in Maine in the snow. And the audience won’t know [in advance] how each scene will play out because most of them will take a twist.”