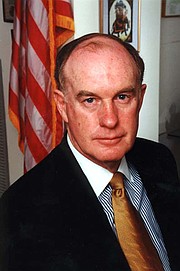 Lieutenant General Thomas McInerney, USAF (Ret.) is the keynote speaker for the Wednesday, Nov. 18 meeting of the Republican Women of Clifton (RWC) at Fairview Elementary School, 5815 Ox Road, Fairfax Station. The social half-hour will begin at 7 p.m. followed by the presentation 7:30 p.m.

Gen. McInerney will discuss how the Iran Nuclear Agreement enables Iranian aggression. McInerney is a noted expert who recently testified to the House Committee on Government Oversight and Government Reform on this topic.

He is a decorated USAF Lieutenant General, who served in top military positions and reported directly to the Secretary of State. He is a senior military analyst for Fox News, commentator and author of articles published in the Wall Street Journal, Washington Times and Washington Post. He served 35 years in the USAF, including four tours of duty in Vietnam as a pilot, then held many high level roles before retiring from the service as assistant chief of staff of the Air Force and as director of the defense performance review, reporting to the Secretary of Defense. He currently leads his own consulting firm, Government Reform Through Technology (GRTT) and is the Chairman of YottaStor LLC.

“We are honored to host General McInerney and have the opportunity for our members and guests to learn from his insight and expertise,” said Alice Butler-Short, RWC first vice president, programs chair.

Attendees are invited to contribute $5 at the door for TAPS - the Tragedy Assistance Program for Survivors of our fallen heroes.