Springfield and Alexandria: New Hayfield theater director pulls from 7th through 12th grades for Disney's "Beauty and the Beast"
Votes

Springfield and Alexandria: New Hayfield theater director pulls from 7th through 12th grades for Disney's "Beauty and the Beast" 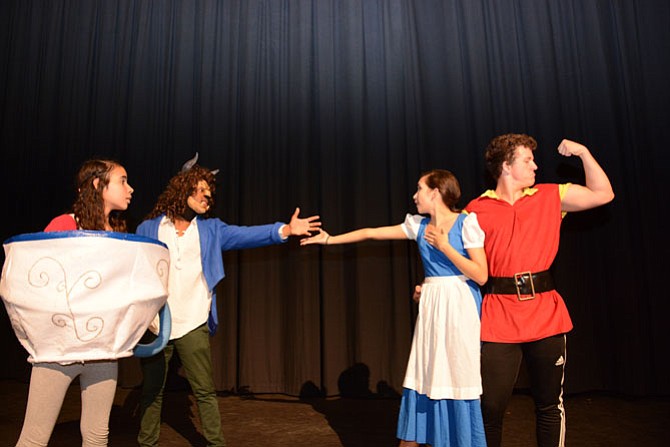 The cast of Hayfield’s production of “Beauty and the Beast” rehearses a scene featuring senior Hank von Kolnitz as “Gaston.”

Taegan Chirinos is living every little girl’s dream: to become a princess. In just her second musical, the freshman from Lorton won the role of “Belle” in the Hayfield Secondary School production of Disney’s “Beauty and the Beast.”

“My little sister is telling all her friends,” Chirinos said. “I’m happy she’s proud of me.”

In addition to the new fame, the young actress faces the challenge of exhibiting more emotional depth onstage than in the past. Scenes when Belle’s father is taken away and when Beast is stabbed demand a lot from her.

“I’m trying to stay positive and remember that I was picked for a reason,” said Chirinos.

The well-known ‘don’t judge a book by its cover’ fable was chosen by the school’s new theater director Pat Mitchell as something fun and inclusive to get started.

“It’s great for them,” Mitchell said, of being able to build a large cast and draw from seventh through 12th grades. “High school is about giving kids opportunities to perform, not just the best kids.”

Getting the younger students involved early also allows Mitchell to develop leadership and mentoring skills in the older actors as well as ensure longevity for the program. “We’re building a theater community at this end of the county,” he said. “There’s room for growth.”

Though Disney’s “Beauty and the Beast” movie was released before any current Hayfield students were born, most grew up singing the soundtrack and know the story well. 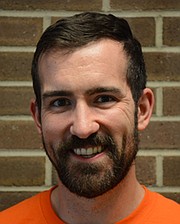 “You can’t just mimic the movie,” he said, “then it’s just a performance. This is more building your own version of a stock character.”

“In the stage version, the characters can have more of their own ideas about everything,” Kolnitz added.

Kolnitz has previously appeared in the school’s productions of “You’re a Good Man, Charlie Brown,” “Singing in the Rain,” and “Hairspray.” He called getting to play such a well-known character “such an important experience” as he plans to pursue musical theater in college.

Chad Vann, a junior playing Beast as well choreographing the show with two other students, remembers “Beauty and the Beast” as the first Disney movie he ever saw and the first Broadway show he fell in love with.

“My parents would always play it around Christmas,” Vann said. Compared to the more animalistic Beast in the movie, Vann said he wants to bring out a “more human element” in this performance.

“His inner turmoil needs to come out as the show progresses,” he said, adding that the way Mitchell does the stage blocking allows the “specificity of character to come through.”