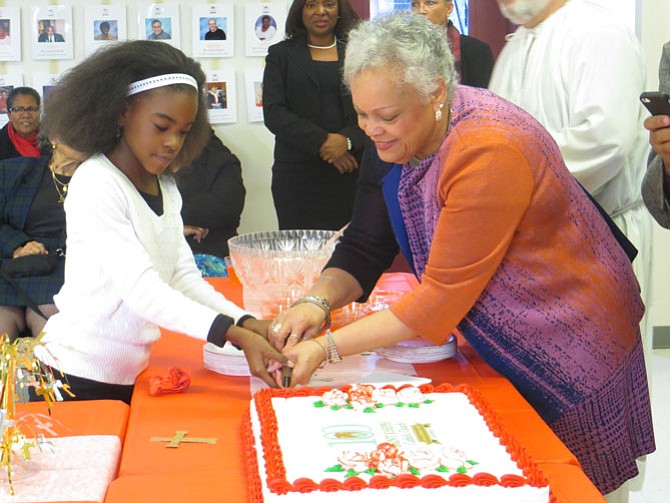 The Rev. Michael Thompson had a problem. Sunday, Nov. 15, was the 100-year anniversary of the St. Joseph Catholic Church in Alexandria. The day was the end to a full year of events marking the struggle and perseverance of the historic and largely African-American community, and yet the scheduled church readings had vaguely apocalyptic overtones.

“Heaven and earth will pass away,” reads Matthew 24:35, “but my words will never pass away.”

But then Thompson thought a little more about the apocalypse and realized he had been looking at it all wrong. In the Christian theology, the “end times” isn’t really an ominous destruction of the world, but the beginning of something anew. In the same way, the centennial celebrations for St. Joseph’s were the end of one era for the community and the beginning of another.

“One hundred years ago, our ancestors expected today,” said Thompson. “They planned for it to bring dignity and respect to a people disenfranchised. It took a lot of work to build this church, but they wanted it to stand; to be what it is today. One hundred years have passed, and we’ve been journeying together in faith. It hasn’t been easy, but nothing worth doing is.”

During the ceremony, Thompson blessed a new plaque outside the building from the Historic Alexandria Foundation commemorating the anniversary. Gail Rothrock, a member of the board of trustees for the Historic Alexandria Foundation, attended the ceremony and said the award was as much for what the church has brought to the local community as it was for the building itself.

“It was built 100 years ago and the building has still managed to maintain its architectural character,” said Rothrock.

But 100 years ago, St. Joseph’s future was far from certain. Char McCargo Bah, a local author and historian, said the St. Joseph's’ community originally started at the nearby St. Mary’s Catholic Church, where before the Civil War, many slaves came from around Maryland and Virginia to attend services with their masters. During the way, many of them moved to Alexandria as contrabands, escaped slaves affiliated with Union forces. But after the war, Jim Crow laws put increasing restrictions on the community. They were forced into the back of the church, then told not to sit with the main congregation. Eventually the African-American community from St. Mary’s broke off and formed their own church: St. Joseph’s. Bah emphasized that this was not an easy feat. 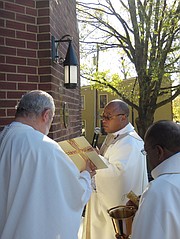 “They were trying to raise the money themselves, and they almost didn’t have enough,” said Bah. “They had to struggle to get the money and get the land available. But many of them were very committed to their church and their religion.”

“It wasn’t easy building St. Joseph’s,” said Thompson. “It came with great difficulty. They were establishing a community of faith for a downtrodden people.”

But 100 years later, the church, and the sense of community with which the founders infused it, remain standing.

“It’s a great family atmosphere here,” said Joseph Brooks, and then after considering for a moment, “It really is like being among family.”

The idea of St. Joseph’s as family was a recurring one.

“St. Joseph’s is … life,” said Lynn Reed with a laugh, who went to the nearby school with Majors. “I was baptized here, I was married here, I’ll probably be buried here. It’s family here, you know everybody.”

Stephen Rochon said the church is about more than the priest or the building, it’s about the fellowship.

“Look around the room,” said Rochon, motioning around a reception area beneath the main church building. “[St. Joseph’s] was founded by African Americans, but there’s such a diversity here.”

While many of the discussions and celebrations centered around the ancestors that founded the church, like Thompson, Deacon Albert Anderson said equal attention must be focused on the future.

“We’re called to embrace and celebrate the future,” said Anderson. “Our young people aren’t our future, they are also our present.”

Anderson grew up in another St. Joseph’s church in Norfolk, and in the 1990s he and his wife joined St. Joseph’s Church in Alexandria. Anderson said he really discovered how loving and supportive the community was as he worked to become a deacon, finally being ordained in 2011.

“This is a home,” said Anderson. “People travel here from far outside the parish just to be here … This church means everything to me.”