Laughter, Chaos and Lots of Heart on Stage in Fairfax
Votes

Laughter, Chaos and Lots of Heart on Stage in Fairfax 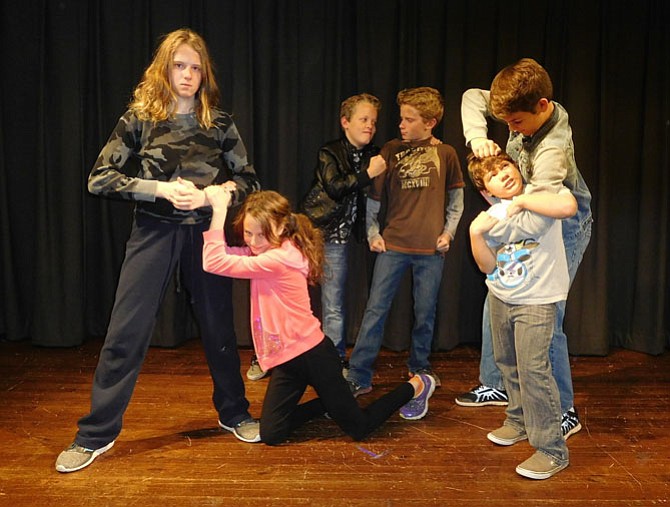 The rowdy and rambunctious Herdman children are (back row, from left) Anna Zakreski, Harry MacInnes, Preston Cain and Aaron Eckloff, and (front, from left) Sarah Zakreski and Donovan Lanoue-Chapman. Photo by Bonnie Hobbs. 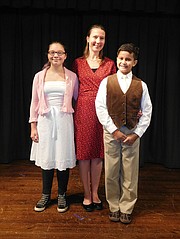 Portraying Mrs. Bradley and her well-behaved children are Porsha Poteet (center) and (from left) Bella Lanoue-Chapman and Noah Tajudeen.

Ticket for both, $30; reserved seating.

Ticket for both, $30; reserved seating.

A hilarious comedy – with or without a meal – that’s the City of Fairfax Theatre Company’s upcoming production of “The Best Christmas Pageant Ever.” Presented jointly with Truro Anglican Church, it is slated for Dec. 3, 5 and 6 at the church, and two of the shows will include dinner.

The story is about the six Herdman children, ages 6 to 13, and the havoc they wreak when they take over all the lead roles in their small town’s annual Christmas pageant. But it is a comedy, so everything works out in the end – and there are lots of laughter along the way.

“The Herdmans are the worst kids in the history of the world,” said assistant director Emily Dillard, a junior at Fairfax High. “They lie, cheat, steal, smoke cigars and take the Lord’s name in vain. But one day, they go to church for the free food and get involved in what will ultimately be ‘The Best Christmas Pageant Ever.’”

“I love coming to rehearsals and working with the director,” continued Dillard. “And all the people taking part in this production are great and come from many different backgrounds. Everyone should come see this show because it’s hilarious and parts of it are relatable to everybody – whether you’re church folk, a mom or just a kid trying to be a kid. This was my favorite Christmas story as a kid because these characters are so quirky, but so real, at the same time. And the story really does capture the true meaning of Christmas.”

Porsha Poteet, of the City of Fairfax, plays church mom Mrs. Bradley, who is filling in as the pageant’s director, for the first time. “She’s calm and likes children,” said Poteet. “But when the Herdman children take over the pageant, she starts wondering if she can do it. So she gets stressed out, until she decides to make the best of it and work with them.”

Poteet says she is having a “fantastic time. I’m the mother of six children, so [being part of the show] is a nice break for me. I enjoy my role’s humor and funny lines; and I, too, grew up reading the book and loved it. The way the Herdmans think is the way all children think, and it’s really fun to work with the actors playing them.”

She said this show “will give the audience a different perspective on the Christmas story. And there’s a scene with firemen that’ll be really fun for kids to watch.”

Preston Cain, 12, a Thoreau Middle seventh-grader, portrays Claude Herdman. “He and his brother Ollie are energetic partners in crime; all the Herdmans are rambunctious and crazy and do things you’d never think of doing,” said Preston. “Claude’s mischievous and impatient and wants things to go the way he wants them to.”

Enjoying his role, Preston said, “I like the stage combat, and it’s fun playing Claude because I get to release my inner child and be free without any control. Because the Herdmans’ parents are never there, they don’t have any supervision and just run wild.” But he said the audience will like all the characters, “especially the children, and the show’s very kid-friendly.”

Playing Charlie Bradley is Fairfax Villa Elementary fifth-grader Noah Tajudeen, 10. “He’s an average kid who’ll tell on you and call you out for doing something wrong,” said Noah. “But he also wants to fit in. However, he doesn’t want to be in the pageant; he thinks it’s boring, overrated and for younger kids.”

It’s a cool part, said Noah, because “I get to react a lot and have fun pretending to be hit by the other kids, and I say funny things. This is a family-oriented show for all ages. And although it’s a comedy, it also tells a lesson about not judging people.”

The cast and crew of about 50, mainly from Fairfax-area schools, have been rehearsing since early September, and director Kirsten Boyd says things are going well. She also praised her assistant director, saying “Emily keeps the energy level up and the cast engaged.”

“Ninety people auditioned, and the ones we chose are really talented,” said Boyd. “It’s challenging to work with so many young actors, but it’s exciting to see them growing, and this provides an opportunity for them to start loving theater at a young age.”

The scenes take place in the Bradley family’s home and in the church during play rehearsals. “And since it’s a dinner theater, the actors will use the whole space, so the audience members will feel like they’re part of the action,” said Boyd. “It’s a nice story about the true meaning of Christmas. And it also shows what happens when people in need become part of a community and it changes everyone’s hearts for the better.”