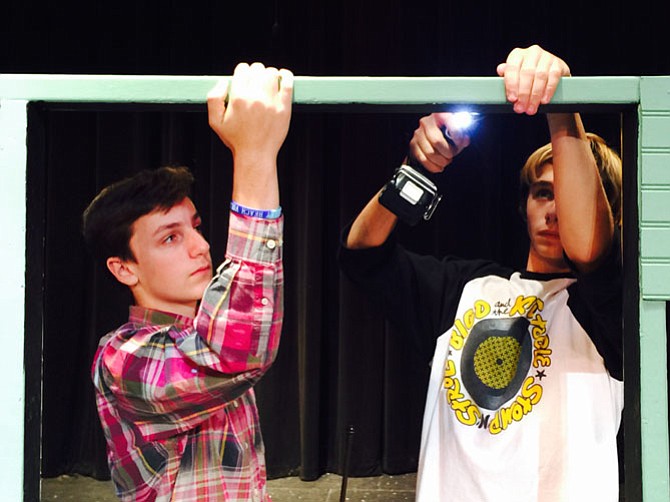 Quinn Partee and Ben Goodson take down the set after rehearsal Sunday at the Langley School. 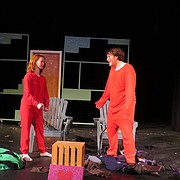 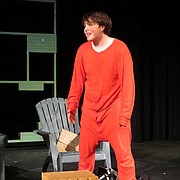 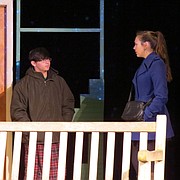 Jamie Goodson calls her scene serious, but it transitions to a hilarious one. “You’ll be laughing your butt off,” she said.

Playwright John Cariani convinced Richie Follin and Peter Ongman to stare into each other’s eyes for 25 seconds. On stage.

“At first we were like, ‘Are you serious? You’ve got to be kidding me,’” said Ongman.

“He had us doing some funny stuff,” said Follin.

Ongman said he was dared into trying out for his role.

Jamie Goodson already has performed professionally. She acts throughout the year, during the school year and summer. She’s learned that to “give it all you’ve got, to take chances, to take risks.”

“I come alive on stage. It is the most fun thing to pretend you’re somebody else,” she said. “Theater is my safe place at school. I go there for my free period. I go there whenever I just want to chill out.”

Caroline Bugge auditioned for her role, knowing she loved the character she will play.

“This is my first time trying out for something and it was such a treat to get a role,” she said. “I like to be the center of attention, I’m not going to lie.”

LANGLEY’S PRODUCTION will be performed this weekend at The Langley School while renovations continue at the high school.

“It’s done in vignettes, each scene is 10 minutes, 15 minutes, and they are strung together,” said Bugge. “When you sit back and watch the whole play, you see storylines are intertwined, even the slang is overlapped.”

Josh Haydn finds himself on stage, awakened by his girlfriend to be in the middle of a life-changing discussion.

“In my scene, my girlfriend, she wants me to return all the love she gave me, and she returns all the love I gave her, and there’s all these big bags of love, and I’m just very confused,” said Josh Haydn. “But it’s nice because for my costume I get to wear sweatpants and socks and sleep. It’s pretty grand.”

Andal Paul plays a wife in her 30s who attempts to fix a broken marriage. “So she takes her husband Phil out to go ice skating with her,” said Paul. “But the scene is kind of a revelation to her that the marriage is not going to be mended.”

“It’s kind of taking who I am and trying to find something in my life that translates to the character. You have to make it believable because that’s how people that watch you are going to believe you,” she said.

Bugge meets her friend, Sivan Tretiak, on stage after she hits him on the head with an ironing board at a laundromat.

“I play Marvalyn and I see her in so many little things that I do. She’s kind of a mess and so am I. I’ll be getting into the car and I’ll hit my head and say, ‘Oh that was such a Marvalyn thing of me,’”

On stage, her character has an abusive boyfriend. She’s surprised by how sweet Sivan is. She kisses him.

Bridget Fitzgerald plays Rhonda, a character who likes to drink beer and is a snowmobiler.

“It gets very hot back there. I was back there for 20 minutes and I felt like I ran a marathon,” she said.

“This was definitely one of the scenes I thought was very funny, just crack up,” she said.

Goodson calls her scene serious, but the serious scenes transition to others that are “hilarious.”

“You’ll laugh your butt off, as well,” she said. “You’ll be laughing, you’ll be crying, you’ll be smiling, maybe all at the same time.” 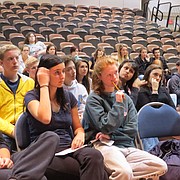 It’s “hell week” this week for actors and crew, but Langley students live for the performances they give to the community.

IT’S HELL WEEK for the actors, actresses and tech crew, meaning they rehearse each night until 9 p.m. or later on top of continuing to be students for a full day of school, family members, athletes, friends.

“We’re a community, we’re a family, we all feed off each other, we all get closer because we’re all going through the same things. We say it’s a lot of work, but when it’s done all we all want is to get into another show,” said Paul.

They call their teacher, Valerie Karasek, Mrs. K. “She says sometimes the scene will find itself in a different way than it did the night before. She’s always looking for us to play off each other. Sometimes the stakes will be higher than they were the night before,” said Paul. 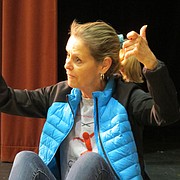 “IT’S FUNNY. We have some romance action, fun for the whole family. It should be interesting to watch,” said Haydn.

“The characters are very real,” said Follin. “John Cariani told us that the characters are based off people he knew. Even so you say, I’ve been in a situation like that, maybe not as extreme as some of them, but there is something in every scene where you can totally relate to that character.”

“You can go see a movie or you can come see your friends be the stars,” said Bugge.