Residents talk I-66 with VDOT reps At Vienna Mayor’s Meeting. 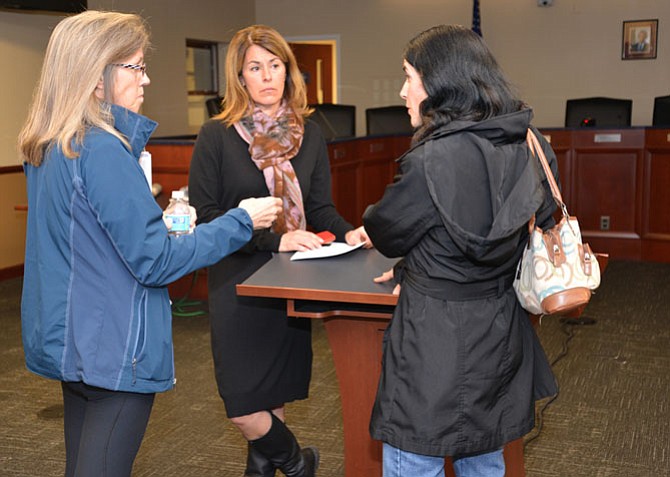 From left --Julie Hirka, Vienna Mayor Laurie DiRocco, Laurie Miller at the Mayor’s “Vienna at Your Service” event. Hirka and Miller both voiced concerns about the plans and the impact on the community. Neither is convinced that VDOT’s solution is the answer to the perennially congested I-66.

From left -- Vienna Mayor Laurie DiRocco and VDOT megaprojects director Susan Shaw listen to comments and questions about the I-66 Outside the Beltway Preferred Alternate Plan for improvement at the Mayor’s “Vienna at Your Service Meeting.”

Since the Virginia Department of Transportation (VDOT)’s last large-scale public presentation of its plans to improve the I-66 corridor from Gainesville to the Beltway, that major commuter artery has won the dubious distinction of first place on the “Worst Damn Freeways in America” list. Using data from the Federal Highway Administration, the website Thrillist.com awarded the title to I-66 based on factors like the average number of hours of congestion per day, condition of the actual roadway, difficulty in predicting travel time, and the more-difficult-to-define “danger factor” of travelling on the road.

Even without this latest public condemnation, not many would argue that I-66 is anything but a major problem requiring a major solution. But not all of the residents who attended Mayor Laurie DiRocco’s “Vienna at Your Service” forum on Tuesday, Nov. 10 agreed with VDOT’s plan to improve the situation.

Susan Shaw was the evening’s main speaker. The VDOT megaprojects director for the Northern Virginia District presented a scaled-down version of the department’s Preferred Alternative Plan (what Shaw describes as the “pencils down” draft), focusing on the elements most likely to affect Vienna, including major changes to the Nutley Street/I-66 interchange, and the potential impact on several schools and parks in the area.

Because of the enormity and expense of the project (estimated at $2.1 billion), the Preferred Alternative calls for construction in two phases. “We have problems today,” said Shaw. Phase 2 would address issues further west than the Phase 1 project limits, and also offers the potential for expansion of Metrorail beyond the station in Vienna as well as additional commuter facilities and interchange work, while Phase 1, in VDOT’s estimation, meets the department’s goals to move more people, reduce the hours of congestion per day, improve safety, connect the regional transit network, and expand mode choices and transit options. With a targeted completion date of 2021, “Phase 1 offers the best solution to bring relief as quickly as possible.”

VIENNA RESIDENT Laurie Miller doesn’t agree, especially taking issue with VDOT’s description of their plan as being “multimodal.” “Extending Metro is being treated like an afterthought,” commented Miller. Miller came armed with facts and figures about the construction of the Metro system and wanted to know why more Federal Government assistance to enhance the system wasn’t an option to curing the I-66 ills. “So many of the people commuting through our area are doing business because of the government. Why can’t they take more responsibility in fixing the problem they helped create?”

Roy Baldwin also spoke out against the Preferred Alternative Plan. Baldwin, who said he had attended many of the VDOT public outreach meetings, began his comments by thanking Vienna Mayor DiRocco for hosting the forum. “This is the first time I have been able to get the microphone and tell someone how I feel.” He asked the VDOT representatives why “none of the above” wasn’t ever a choice “at all those meetings asking for public input. That would have been my answer.” 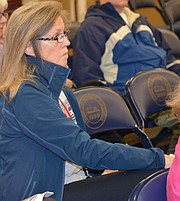 Vienna resident Julie Hirka was one of several attendees who voiced concerns about the I-66 project, worried that the end result would change the face of parts of Vienna and clog much of Fairfax County, while basically constructing a “network of toll roads in Northern Virginia.”

Baldwin’s greatest concerns? “The suffering we will go through to build all this is just not worth it. Keep adding lanes and they will just keep filling up…and the developers will just keep expanding alongside.” He believes that any relief afforded by the current plan will be short-lived before the congestion returns, “worse than ever.”

Baldwin, Miller, and others present also expressed concerns about the toll proposals for the plan’s new Express Lanes. “What we are building is a network of tolls in Northern Virginia,” observed Julie Hirka. “Where does it end?” If the procurement process ultimately chooses another private system to fund and maintain the new lanes, Baldwin added that Northern Virginia drivers “will be further at the mercy of the private owners of the road, just like the folks who use the Dulles Greenway.”

OTHER CONCERNS raised by Vienna residents ranged from big-picture scope, such as how the I-66 outside the Beltway project will coordinate with inside the Beltway works and other projects already underway, to fears about local impact. Project director Shaw noted that based on public input, changes to the design had been made to avoid impacting the recreational fields at Stenwood Elementary School and area parks. She also assured the gathering that VDOT was working on transit options that would “spread commuters out to other connection points like Tysons and East Falls Church stations when one resident worried that the Vienna station would be overwhelmed by new commuters from points west. 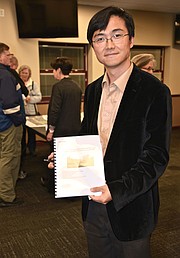 Erik Yang presented a petition to VDOT’s Susan Shaw and to Mayor Laurie DiRocco with over 250 signatures, asking for the plan to leave undisturbed an existing mature tree-line. “Cutting these down would be a real blight,” said Yang. He represents a group that has been collecting signatures both in person and also via an on-line change.org campaign.

The construction of sound barriers along most of the route is a major part of the Preferred Alternative Plan. Shaw was able to clear up some confusion about this portion of the project. “The Bike/Pedestrian path will run on the outside, not between the walls and homeowners’ backyards.” Companies who will be bidding on the project will have clear instruction that a long lag time will not be accepted. “There won’t be tearing down of existing walls on day one,” she insisted, “only to have the homeowner wait four years for the new one to be built.

Even with those assurances, some residents are calling for VDOT to re-think damage to existing tree-lines along the route. Erik Yang of Vienna presented Shaw and Mayor DiRocco with a petition to that effect with 253 signatures gathered to date, many from an online campaign at www.change.org.

“There is no perfect plan, one that would satisfy everyone,” acknowledged Shaw. “…with the constraints of space, money, multiple municipalities, historic sites and private property…we’re not building ourselves out of congestion.”

Conceptual financial proposals from the short-listed construction teams are due by December 1. VDOT plans to announce the preferred delivery method on December 9. Detailed information about the project, including all related studies and a video that depicts the project in geographic segments, is available to the public at www.outside.transform66.org.