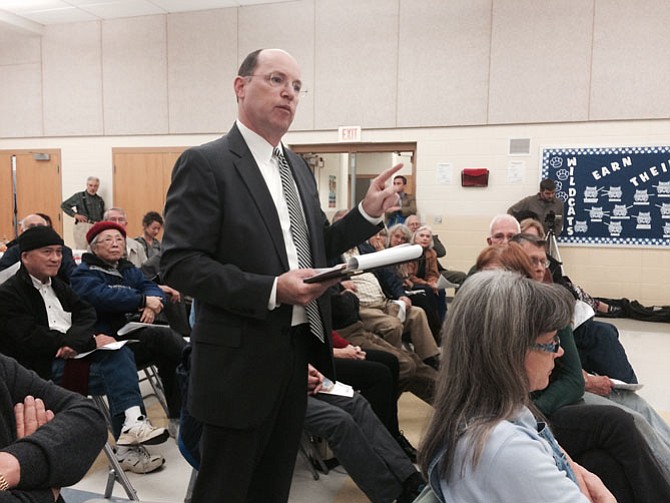 More than 110 people came to Seven Locks Elementary School to hear about a proposal to fill a 20-acre future school site on Brickyard Road with ground-mounted solar panels. A Montgomery County Public Schools request for proposals resulted in preliminary plans to put an industrial solar array on three sites in the county.

C.J. Colavito of Standard Solar and Mike Volpe of SunEdison answer questions about their proposal to build an industrial solar array on the Brickyard Road school site. 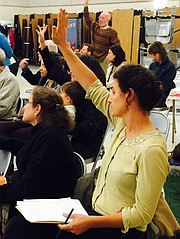 Sophia Maravell advocated for an educational farm on the site.

Solar array as envisioned for the Brickyard Road site; ground mounted panels would cover 12 acres of the site, with a chain link fence topped by barbed wire surrounding.

More than 100 people turned out at Seven Locks Elementary School in Potomac on Tuesday, Nov. 17, to hear about Montgomery County Public School’s latest proposal for a 20-acre “future school site” on Brickyard Road.

This time, the proposal is to fill the former organic farm nearly edge-to-edge with ground-mounted solar panels and to surround the entire site with a chain link fence topped with barbed wire.

For more than 30 years, the site had been leased to Nick Maravell and operated as an organic farm. The property is isolated from commercial farms, allowing for the production of heirloom GMO-free seed corn and soybeans. In 2011, County Executive Ike Leggett announced as a fait accompli turning the site over to become a soccer complex, but he abandoned that after nearly two years of community opposition and legal battle in Montgomery County Circuit Court. Still, the organic farm was locked out of the site in early 2013, and it has been idle since then.

TWO LOCAL COMPANIES, SunEdison and Standard Solar responded to MCPS request for proposal to expand the use of solar energy in the schools, including eight projects for solar panels on rooftops of school buildings, and possibly over school parking areas. As part of the process, the companies were invited to look at school property for large ground-mounted facilities, and that process brought them to three future school sites, including Brickyard Road. The other two sites are a future middle school site on Warfield Road in Gaithersburg, which is currently leased out as a driving range, and Cashell Road in Rockville. The school system has been working on the proposal since January 2015.

The Brickyard Road site and the other two were selected because the projects require at least 20 acres not covered by forest, that would not be needed for schools for at least 10 years, said Sean Gallagher, with Facilities Management at Montgomery County Public Schools.

As proposed, solar energy produced by the Brickyard site could produce $90,000 annually in cost savings, Gallagher said. The combined benefit of the three sites would be $2.4 million annually. Cost of construction would be about $5 million, he said, although the projects as currently proposed do not include costs of landscaping or screening to buffer residential neighborhoods.

Gallagher identified the primary motivator for the projects “to be good stewards” of the school system’s energy expenditures, and for “significant cost avoidance.” State and federal tax credits and incentives are included in the cost savings.

RECENTLY PASSED Board of Education policy on managing school property states that interim use of undeveloped property should be consistent with its zoning classification, the community should be consulted about preferred uses, the lease should not be for more than three years, and priority will be considered for programs that benefit MCPS students, their families, or staff.

The new policy, “Management of Board of Education Property,” in part was motivated by confusion and conflict over past proposals for the Brickyard Road site.

Industrial use is not permitted by the zoning, RE-2 or one house per two acres, on the Brickyard Road site or the surrounding neighborhood.

“You simply can’t build this under the current [zoning] code,” said Curt Uhre of the Brickyard Coalition. Uhre was instrumental in the successful opposition to a soccer complex on the site that was proposed in 2011 and abandoned in 2013.

Gallagher responded about compliance with the zoning: “It’s a loose end that needs to be addressed.”

Dennis Kelleher, who lives across the street from the site on Brickyard Road, called the economic justification for the project “a joke,” and described the proposal as “wholly inappropriate.”

“We pay a lot of taxes,” Kelleher said. “The county and the Board of Education seem determined to destroy our neighborhood.”

Since the county gave up the plan for a soccer complex, the community has faced the possibility that the site would be used for a school bus depot, or that Potomac Elementary School might be relocated to the site.

AS EACH MEMBER of the audience asked questions and made comments, Gallagher told them to follow up by sending their comments to a school employee via email or mail.

“The purpose of this meeting is to provide information to the community,” he said. Even though more than 100 people were there to provide input about the project, the meeting was not designed to capture community comment, and responsibility fell to the community members to take another step for their input to be recorded.

Susanne Lee of West Montgomery County Citizens Association asked about the process going forward, but Gallagher was unable to detail whether there would be public hearings on this proposal. He cited the general public comment period at regular Board of Education meetings.

“You can’t build an industrial system like this without having a negative effect on property values,” said Charles Doran, a Brickyard Road resident. “The loss in taxes from decline in value of the houses right around [the site] will exceed the solar revenue.” Doran predicted a net loss in revenue.

Most nearby residents who attended the meeting said they had received no notice from the school system, but instead heard about the proposal in the last few weeks from Brickyard Coalition newsletter and the local newspaper.

“To be clear, we support MCPS investments in energy efficiency and renewable energy,” said a letter from Save Our Soil, a group that advocates for organic farming in Montgomery County. “We simply think the MCPS should install solar panels on top of school buildings, and over existing school parking lots and bus depots, rather than destroying precious organic farmland and other green spaces.”

“It doesn’t make sense to destroy an organic farm to get solar energy,” said Sophia Maravell, who operated an educational program on the property alongside an organic seed farm. “That’s not a good environmental message to be teaching our kids.” Maravell also cited the educational benefits and the amount of carbon absorbed by the organic soil on the site.

In its last year, the Brickyard Educational Farm introduced local students to organic farming on the site as well.

Brickyard Educational Farm was a nonprofit that hosted 600 students out on the land before the lease was terminated, including students from Bullis, Georgetown Day School, Barnesville School, and City of Rockville summer camps.

Uhre also questioned why the proposal didn’t include screening to protect adjacent properties. “It seems rather odd that you would propose putting an industrial solar array in a residential neighborhood with no landscape buffer.”

Mike Volpe of SunEdison replied that MCPS’s request for proposal did not call for landscaping and screening, and SunEdison left it out “to provide the best economic bid that we could.”

“There is no new green space being created here,” said Greg Smith. “Each acre is precious. I oppose construction of these arrays on any arable land.”

“We have an unintentional gift here,” said Ed Guss who lives nearby. “It totally baffles me why a Board of Education that is supposed to be responsible for the education of children would, with an opportunity to educate the next generation of leaders dealing with climate change, be foresaking that opportunity.”

Management of Board of Education Property

b) The interim use of undeveloped property should be consistent with its zoning classification and applicable laws.

c) Community feedback for the interim use are considered in the recommendations of the superintendent of schools for lease of the property.

d) Leases shall be awarded by competitive sealed bid or request for proposal.

g) All lease terms shall be a maximum of three years with a renewal option determined by the Board. The Board has the option to allow a longer term under special circumstances. … The superintendent of schools shall advise the Board of any pending request for a lease term longer than three years during the negotiation process.

h) All new leases and renewals will require approval by the Board.

i) When leasing properties, priority will be considered for programs that benefit MCPS students, their families, or staff in accordance with applicable laws.