Fairfax Reaches ‘A Significant Milestone in the Journey’ to Affordable Housing 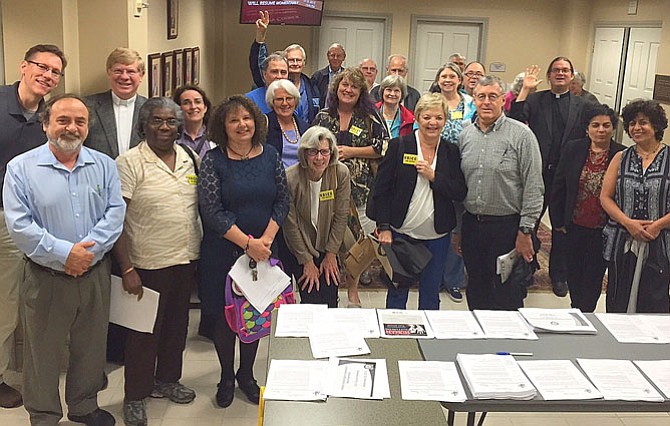 The City of Fairfax welcomes developers wanting to build new homes here, but it also wants lower-income families to have places to live, too. Toward that end, the City Council last week adopted its first-ever, affordable-housing policy.

At the Sept. 29 Council meeting, Human Services coordinator Louise Armitage explained how, in 2013, the Council members directed a Housing Affordability Work Group to develop and make recommendations about a policy. Now that it’s done, she said, “I can’t be more proud of where we stand at this point.”

“We developed affordability guidelines for rental units,” said Planner Eric Forman. “And so far, four multifamily projects have had their affordability components individually negotiated – and some, at the last minute. But staff believes there should be an official policy for a more predictable and unified approach. Then public hearings [on new projects] wouldn’t have to focus on those minute details.”

THE GROUP recommended no less than 6 percent of all rental units be affordable to people earning 60 percent AMI (Area Median Income) – roughly $65,000 per year or below – for 30 years. Calculations would be based on an affordability standard of 30 percent, including utilities, as defined by the FHA. The qualifying income amount would vary according to household size.

“We’re proposing a two-tiered, rate system, based on by-right [developments] vs. developments needing City approval,” said Brooke Hardin, director of Community Development and Planning. “[Cash contributions] would be $3,012 per unit up to the by-right [home-density] threshold, and $6,036 per unit above it. For rental conversion, affordable units would be provided instead of cash.”

However, he said, all cash contributions for for-sale projects would go into an Affordable Housing Trust Fund. Hardin said having a definite policy in place would “provide consistency and send a clear message to developers regarding [the City’s] expectations.”

“I still prefer a voluntary, cash proffer, in lieu of affordable dwelling units (ADUs),” said Councilman Michael DeMarco. “And we may get more units from developers who don’t want to make a cash proffer, so it could be a win-win. And in case of condo conversions during a 30-year period, could the developer do a cash proffer, instead?”

“Yes,” replied Forman. “Most rents today don’t include utilities, and we believe the rate agreed on should include all fees – especially for affordable-housing tenants, who couldn’t afford any extra expenses.”

Regarding staff to certify ADU-compliance and manage a housing trust fund, Armitage said, “We’d like to establish a relationship with Fairfax County – which already does this and receives federal funding for it – to do this for us.”

Councilman Jeff Greenfield said affordable apartments converted to condos would need to be upgraded and either rented or sold at ADU prices for the balance of the 30-year affordability term. The Council added that condition, and Forman said a nonprofit group could manage these units.

While Greenfield said making a cash contribution could push a developer into building more dense projects, Mayor Scott Silverthorne said, “We don’t want to have to debate the issue of affordability every time a developer comes in. So we need to stand firm as a Council.”

“We don’t want to have to debate the issue of affordability every time a developer comes in. So we need to stand firm as a Council.”

Several residents then spoke. Saying he strongly supports an affordable-housing policy, Al Smuzynski told the Council, “Housing trust funds are critical in high-cost areas. This is a good, first step, and I hope you’ll find additional sources of [this] money in the future.”

“To prevent and end homelessness, you need to have affordable housing,” said Dorothy Sorrell. “Many millennials have low incomes, making it difficult for them to afford housing.”

ABOUT TWO DOZEN members of VOICE (Virginians Organized for Interfaith Community Engagement) were there, including Judy Fisher, who said, “This would maintain a community which welcomes all and allows local businesses to have a nearby workforce.”

June Bloedorn, a Providence Elementary social worker, said, “I work with a lot of kids whose parents are working two jobs and contributing to our community, but are worried about losing their homes. So I’d hate to see these people get pushed out of the City.”

Councilman David Meyer then moved for adoption of the policy, with Councilwoman Janice Miller seconding. Meyer also thanked VOICE for “being a voice of conscience. We talk a lot about community, and I believe it’s where there’s a heartfelt and substantive commitment to one another, as well as economic diversity. I’d like us to bring on as many affordable-housing units as possible. And in the future, I’d like us to appropriate money for affordable housing. This is a significant milestone in the journey, but we have a long way to go.”

Agreeing, DeMarco said, “I believe there are opportunities for us to leverage a Housing Trust Fund for grants [so we can do even more with this money].”

The Council unanimously approved the policy and Silverthorne thanked the community members who’ve worked so hard on this issue, some for three years. “This is a far stronger and better policy today than it would have been then,” he said. “And it puts the development community on notice, as well, that the City is serious about affordable housing.”