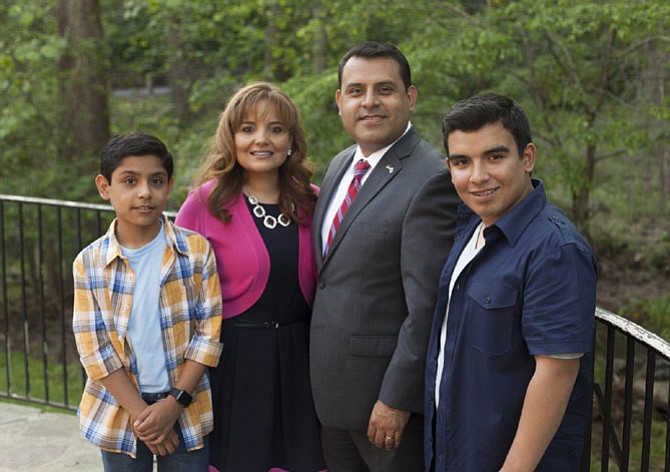 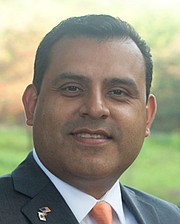 Education: Bachelor’s in political science and American History from GWU.

Family information: He and his wife Marilyn have two sons, Peter, and Nathan.

Community Accomplishments: Guevara was on the PTO Board at Navy Elementary for two terms and was president of his HOA for several years. Recently, he was selected as vice president of the board for Western Fairfax Christian Ministries. He’s also volunteered his time as a youth sports coach and Cub Scouts den leader.

Why Guevara Is Running

When asked why he’s running for Sully District supervisor, Fair Oaks resident John Guevara says his entire life has been one of service.

“I joined the Army at age 17 and served almost 15 years,” he said. “My grandfather was a missionary and taught me the importance of serving others, so it was natural for me to give back.”

A Republican, Guevara grew up in Los Angeles and moved here in 1990. He also started a scholarship, Junior Statesmen of America, at Georgetown University. A father of two sons, he was a PTO board member at Navy Elementary and a Cub Scout den leader.

“I see the needs of the community at different levels,” he said. “For example, homeowners associations don’t want clogged roads, speeding or increased taxes. And county government employees and teachers who come to WFCM because they need help need money.”

Guevara said there’s always room for improvement and more efficiency in Fairfax County government, “so the consolidation of resources is important. We shouldn’t have two, different IT systems in the county. The county government and school systems need to consolidate their services for more energy efficiency and extreme savings in staff and operational costs.”

He works for AT&T and has been endorsed by the League of Conservation Voters because of how he found cost efficiencies in the delivery of network services at the Pentagon. He says Fairfax County could also move rapidly to a wireless environment in its government buildings. “It’s done in phases and is usually a three- to four-year return on investment.”

Regarding transportation, Guevara calls the Route 28/I-66 Interchange “pivotal to development along Route 28 and to the residents living in that area.” And in Chantilly, he said, “We have to look at how one project will affect another. So I don’t want the Preserve at Westfields [residential community] and Wegmans [grocery store] being done before this interchange is improved. They should be done in parallel so that congestion won’t be a concern for these new developments.”

He also says people should “fight hard to ensure that the state doesn’t impose tolls on I-66 inside the Beltway because it’ll hurt Sully District residents the most. They’ll pay an estimated $17 round trip to go to D.C.”

As for education, Guevara believes schools “have to be funded properly so teachers get better pay. I don’t think the School Board has done them well by not paying them adequately. The School Board’s priorities are wrong; they gave themselves a raise, knowing that a deficit was coming up this year.”

When the economy’s in a recession, he said, “I want the budget prioritized so we can stick to the core services, pay teachers first and reduce class size. Then we should prioritize the rest to see what we can pay for and what we can’t. The School Board has asked for unreasonable amounts in years the economy couldn’t support it. People don’t like the fight between the School Board and county government; so, if elected, I’d sit down with [the superintendent] and make sure we understand each other’s priorities.”

Guevara says he’s asked the school system’s Office of Program Evaluation for a list of what programs are working and what’s not. That way, he said, “They could identify the costs to keep them running and then either close them or make changes. But I’ve gotten no response. When the budget is tight, you need to scrutinize every dollar. You have to see what programs need to grow and determine if they’re worth it.”

Regarding economic improvement, he said, “We’ve got to grow the economy through business — foster an environment for business in the county. It’s important to diversify our revenue growth so we’re not so dependent upon the federal government for jobs.” That’s why Guevara’s happy that INOVA is bringing its medical-research complex to Merrifield.

“There’s a huge push for technology, and we need to foster our relationship with organizations that encourage children to become involved with information technology at an early age,” he said. “For example, we should set up a data system, like Amazon, in Fairfax County.”

Guevara said small businesses want the BPOL tax to disappear “because they’re hurt most. So we need to see whether it’s the right time to reduce or eliminate it. But we’d need permission from the state to do it.”

Also critical, he said, are the internal processes by which the county attracts businesses. “The developers have told me the ‘culture of no’ is prevalent in the county and it takes too long to get anything done,” said Guevara. “So we need to streamline and improve the permitting processes and all the bureaucracy.”

He said developers should be able to track their projects online so they can see how the county is working through the process. “I’m confident that we can do this so we can bring in new revenue in the county,” said Guevara. “Businesses are our bread and butter, and we need to treat them well. And my job experience makes me better understand the needs of a business.”

And while he intends to keep his own job, he said his work hours would be reduced and the supervisors would take precedence. Guevara also emphasized that his varied work experience as a military officer, in business and managing large budgets at the Pentagon make him the best candidate for Sully supervisor. Besides that, he said, he’d be the first Hispanic on the board and would reflect the area’s changing demographics.

Susan Chen, of Fair Woods, has known John Guevara for 10 years. “He led my eldest son’s Cub Scout troop,” she said. “And our kids went to school together at Navy Elementary and Hunters Woods.”

“I’ve encouraged him to get more involved in our community because he gets things done and works well with others,” she continued. “We need people like him on the board because he can reach across the aisle.” Noting that Guevara’s worked hard on his campaign, knocking on doors and talking to people, Chen called him personable and easy to talk to, plus pragmatic and a hard worker.

“I’m Asian-American and I believe the Republican Party needs to be more diverse,” she said. “John grew up in poverty and went to GWU — which is the epitome of the American dream. So he brings a different perspective to the position because there are underprivileged people in Fairfax County, and he understands where they’re coming from and what they need.”

Franklin Farm’s Jennifer Busby met Guevara through church and has known him about five years. “He has a heart for service,” she said. “He was involved in several ministries through our church. And we did a lot of programs for the community together. For example, we packed boxes to send to soldiers overseas, and he got children from the church involved.”

Describing Guevara as trustworthy, sincere, a great friend and a good teacher and mentor to children, Busby said “he’d give you the shirt off his back. He listens to people and is looking out for what we want in Fairfax County and our schools. He’s a doer; he’ll get in there and work for the people of Sully District.”

Anoop Govil, of Fair Oaks, has known Guevara about 12 years, from the neighborhood and because their oldest children went to school together. “He’s an honest person, a good friend and helpful,” said Govil. “He was in the school PTA and suggested after-school activities for the kids at Navy elementary.”

Govil said Guevara “tried to do good things in the school and in our neighborhood. As our HOA president, he got the community together at block parties and cleanup days and listened to residents’ issues. And he helped us get an ordinance for our main streets, preventing large, commercial vehicles and boats from parking there so the residents would have places to park.”

He’d be a good supervisor, said Govil, because “he’s got a lot of good ideas, is a family person and would use technology for the betterment of the community. And he’d work hard to come up with creative ideas to improve traffic in the area. We’re longtime friends and, in the last two elections, I voted Democrat; but this time, I’m voting for him.”