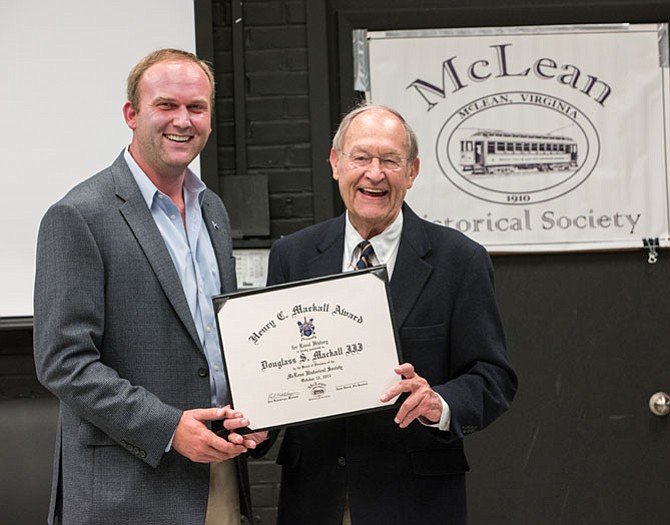 Doug Mackall grew up in Langley, on property his family had purchased from the Lee family in the 1830s. Educated at the University of Virginia, Mackall worked as an attorney for decades with his brother, Henry, in Fairfax County's oldest law firm. During the 1970s, Mackall served as president of the Historical Society of Fairfax County, on whose board he currently sits. In the early 1990s, he and Henry co-authored the by-laws of the McLean Historical Society, which Mackall has served as an officer and, currently, as a director.

Over the years, Mackall has presented the history of Langley to numerous civic groups. For his decades of work preserving and expounding the history of McLean and Fairfax County, Mackall was the unanimous choice of the Award Committee.

The Henry C. Mackall Award for Local History was established in 2014 by McLean & Great Falls Celebrate Virginia, Inc. and is now presented under the aegis of the McLean Historical Society. The award was named in honor of the late Henry Clinton Mackall, a native of McLean and a prominent historian and civic leader. The inaugural award was presented to journalist, historian and longtime McLean resident Roger Mudd.