100 people attend tour of Flint Hill and Oakton Church of the Brethren Cemeteries. 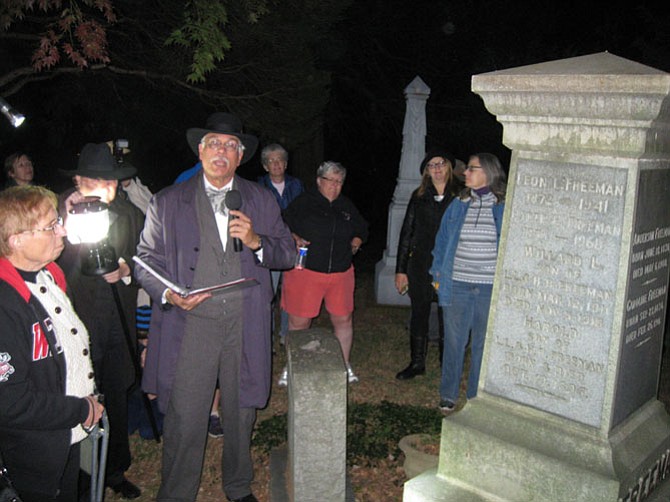 Jim Lewis next to the gravesite of Leon Freeman (1872-1941) buried at the Flint Hill Cemetery, during the Candlelight Cemetery Tour on Saturday night.

Carrying lanterns and flashlights, about 100 people attended a Candlelight Cemetery Tour of Flint Hill and Oakton Church of the Brethren cemeteries, presented by local historian and author Jim Lewis, on Saturday, Oct. 24, near the corner of Courthouse and Chain Bridge Roads in Oakton.

The five-acre Flint Hill Cemetery is the resting place of 27 Civil War veterans, including four who served in Confederate Col. John S. Mosby's Partisan Rangers. With a total of 2,400 buried there, it is one of the oldest community cemeteries in Fairfax County, and one of the largest nonprofit association-run cemeteries organized by volunteers. The first documented burial occurred there in 1852, when present-day Oakton was called Flint Hill.

David Farmer, president of the Flint Hill Cemetery Association, said the event served as a fundraiser to build a new 300-niche columbarium, which will cost $300,000 and will hold cremated ashes. Each 12x12x12 niche will hold two standard-size urns.

"This is a unique cemetery for me personally because I have 200 relatives buried here," said Farmer, including his second great-grandfather, Thomas Hartwell Walker, who is buried there. During the tour, Lewis pointed out Farmer's great-grandfather's tombstone and discussed his life.

Lewis said they held a successful Civil War historic trails marker/illuminaria event three years ago that was "incredible," and they wanted to recreate it. "It was a marker dedication event with well over 100 people and the absolute best. It had Mosby's living history in the cemetery and it blew everybody away; it was so emotional and people really enjoyed the program. So we wanted to do something similar."

Attending the vigil was state Sen. Chap Petersen (D-34) who represents the area and who called the event "just wonderful. This cemetery has history dating back to the Civil War... It's amazing how we've kept our history alive."

Also attending were Pete Kirby, who grew up in Oakton, and his wife Lauren, now living in Centreville. "My great-grandparents are buried here," he said. "We're members of the Bull Run Civil War Roundtable and we heard about the event through that group."

"We know the richness of what's in that cemetery," said wife Lauren.