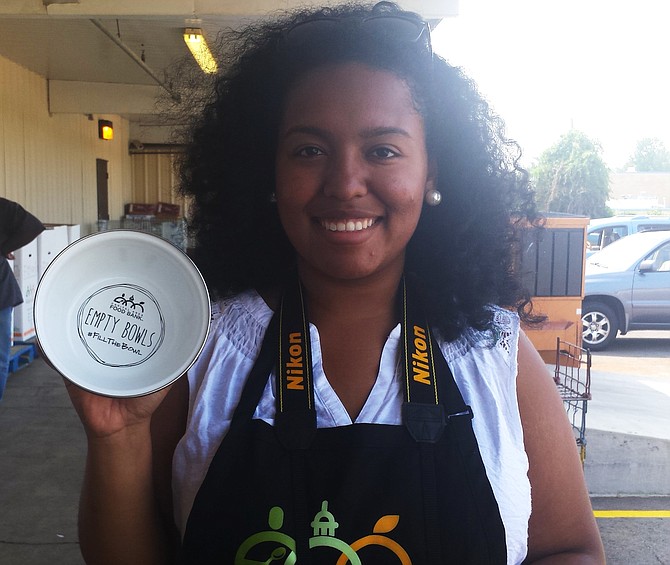 Ihamna Valencia, CAFB Visual Communications Coordinator, holds one of the enamelware bowls that will sold from Sept. 1 to Oct. 16 as part of CAFB’s fundraising efforts. Businesses and individuals are invited to partake by purchasing bowls and spreading the word using the hashtag, #fillthebowl. Photo by Marissa Beale/The Connection

The numbers tell the story. Over 217,000 people across Northern Virginia are at risk of hunger, including 62,000 children under the age of 18, according to the Capital Area Food Bank (CAFB).

(From left) Becca Pred-Sosa and Michael Hollister, two Capital Area Food Bank (CAFB) volunteers. This year, the Hunger Heat Map, designed by Hollister, was launched. It is used to identify impoverished areas that have not yet been reached. It helps meet one of CAFB’s objectives to identify and fill hunger gaps in several different communities.

While September is often associated with the start of a new school year, it also marks the beginning of Hunger Action Month, created by the nationwide nonprofit, Feeding America, and celebrated, this year, at the Capital Area Food Bank’s inaugural NOVA Hunger Action Expo held at their distribution center on Hill Park Drive in Lorton.

“Today’s event is to get neighbors to know that CAFB is here,” said director of marketing and communications, Kirsten Bourne. “Many people don’t know about hunger in Fairfax County.” Community members and local government officials volunteered to fill bags for those in need, and to learn about some of CAFB’s local partners, including ALIVE!, Food for Others, Holiness Tabernacle Church of God in Christ’s food pantry, Our Lady Queen of Peace Catholic Church, Bread of Life Food Pantry and United Community Ministries.

Donation shortages during the summer months affect the number of volunteers needed. In a year, 42 million pounds of food goes through the CAFB and is distributed to children, senior citizens, families, the working poor, homeless and victims of disaster. CAFB’s greatest need is funding, and they are challenging local businesses to help fill the bowl.

Fill the Bowl (#fillthebowl) is a chance for individuals and business to help by purchasing a custom-designed enamelware bowl designed for CAFB. Bowls are $25 and are being marketed toward different companies and their employees. Each purchased bowl provides 62 meals for children, seniors and families struggling with food insecurity.

Any amount can also be donated online at

https://give.capitalareafoodbank.org/campaigns/take-hunger-action. The goal is to raise $16,000 during September, which is enough to provide meals to 40,000 neighbors in Washington, D.C.

On the evening of Sept. 1, the Ferris Wheel at National Harbor, called Capital Wheel, was lit in brightly orange lights to bring attention to Hunger Action Month and CAFB’s efforts. Later this year, on Oct. 29, CAFB will also host its second Empty Bowls fundraiser in Springfield at the Hilton Hotel on Loisdale Road from 11:30 a.m. to 2 p.m.