Column: Mystery of a Hitchhiker
Votes

Column: Mystery of a Hitchhiker

Helping a defeated figure in a pretty beach dress and flip-flops. 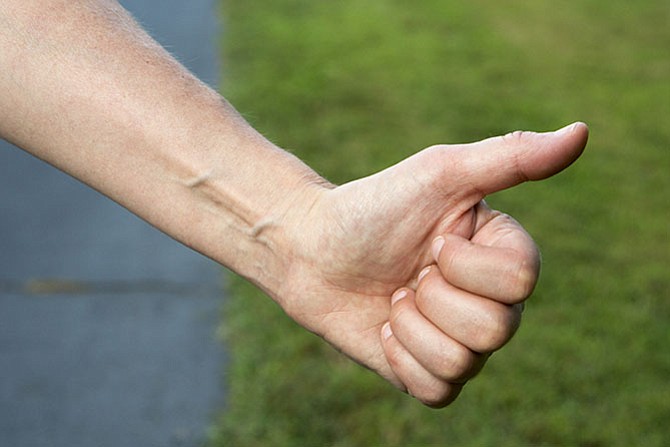 The hitchhiker Photo by Joan Brady

The first guy who picked me up had one hand on the wheel and the other down his pants. And the second told me that he was a burlesque cleaner and told me that women hired him to vacuum their homes and then vacuum off his clothes. I’m lucky I made it back to college without incident.

All of that ran quickly through my head a few weeks ago as I was driving home from dinner with my husband and saw a young woman, walking and crying, with her thumb stuck tentatively out.

I turned around and we passed her again in an attempt to assess the situation. Her need vs. our safety and the time it would take if we got involved. Her thumb wasn’t out anymore, but she was still crying. I u-turned again and we pulled over.

Jim rolled down his window, and asked, “Are you ok?”

“I’ve had better nights,” she sobbed.

“Do you have an address where you want to go?”

She was able to provide an address, albeit in the opposite direction of the way she was walking. It was about a 10-minute drive away. Jim unlocked the car door and she slipped inside.

We rode in an uncomfortable silence, punctuated only by her sobs, as I ran through a mental checklist. What happened to her? Where is her purse? Should we ask if we should call the police? She didn’t appear injured, but maybe there were injuries that we could not see? Is the address we are going to a safe place to drop her off? The questions ran in circles in my head.

I suggested she check the back seat for a box of tissues. Her sobs slowed as she grabbed a handful.

I asked if she was a student. She said no, and half laughed through her tears. “I’m 30, which makes it even more ridiculous that I am in this situation.”

What situation? What happened? I wanted to ask. But didn’t.

She didn’t have a trace of an accent, so we were surprised when she told us she was was not American-born. Her father was U.S. military and her mother had been unwilling to move to the U.S. After years of trying to convince her mother to emigrate, this young woman had come on her own.

As we talked, her tears stopped to an intermittent sniffle.

“Can I ask you why you stopped?” she asked.

“Joan saw you as we drove by,” Jim answered. “We turned around because she said you looked like you were in trouble.” The tears returned.

“We’ve all been in your shoes at some point or another. And hitchhiking isn’t safe. We thought it was better if we picked you up than someone else.”

Silence and then: “I’m not religious. I don’t even believe in God. But I think God put you in my path for a reason. Things have been really bad lately.”

“Everyone goes through bad stretches. You have to figure out how to focus on the positive, but also to learn from times like these and remember them. It’s what you do with these experiences that matters,” Jim counseled her.

I watched in the rear view mirror as she nodded tearfully.

There were so many questions destined to be unasked and unanswered as we pulled up at the address she had given us.

She thanked us again, told us she would pay-it-forward and walked into the apartment building, a defeated figure in a pretty beach dress and flip-flops.

Her story will likely remain a mystery that will haunt us for a long time to come.

Joan Brady is a professional photographer; award-winning columnist; mentor and advocate for current and former foster children; a volunteer with paws4People, Fairfax Families4Kids, and others; and a resident of Great Falls. Reach her at joan@joanbradyphotography.com