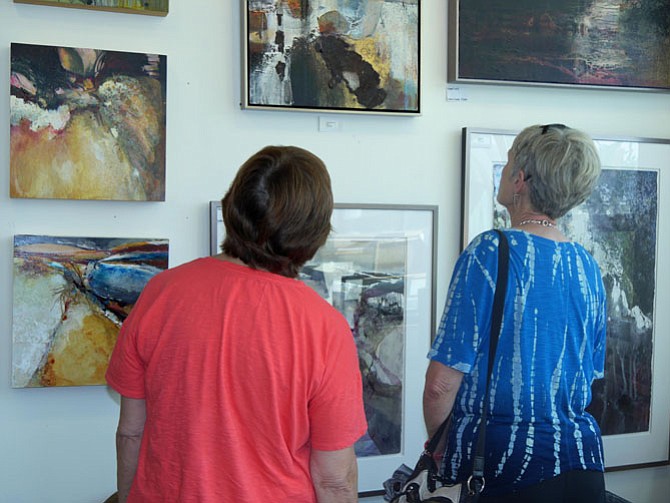 Two people walk through the studio observing the paintings on the wall and having a conversation about what they see and which they like the best. Photo by Shirley Ruhe/Gazette Packet 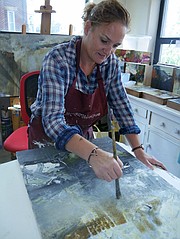 Lesley Clarke begins a canvas in Studio 341 at the Torpedo Factory. She says it will take a week to finish and one probably won’t see much of the beginning when it is finished.

Lesley Clarke brushes an amber brown across the large canvas in Studio 341 in the Alexandria Torpedo Factory. A tub crammed with multi-sized tubes and bottles of paint sits beside the canvas. "You can never have enough paint," she says with her native Scottish brogue. "I just started this canvas an hour ago and it's dry already. That's why I like acrylic paint instead of oil."

Clarke says, "This just the first layer; it has a long way to go, and you probably won't see much of this when it is finished."

She points to the painting on the floor behind her that is almost complete. The average painting takes about a week to finish. "I always just let the paint flow and then go back and make sense of it, " she says. She has a lot of energy in the beginning and then "I go in and look for shapes." Clarke works with three to four paintings at a time or else she "will overwork one."

Clarke stares at the painting with predominately dark colors and a hint of yellow running through it. "I've been in a dark period, a moody phase so the colors are dark." But she adds, “The best thing is not to fight it. It will take care of itself."

How does Clarke know when a painting is finished? "Good question,” she says. "When I start to overwork it, I let it sit for a couple a days. It needs space. Then I come in, and I just know."

Clarke used to paint on her kitchen floor. "I don't have a studio at home. But when I paint it is really messy, and I had to clean it up." She points around the room. "You can see it is really messy in here, but it is OK."

As a child, Clarke was always drawing and then moved to watercolor. "I was never really satisfied with watercolor — it was realistic." Then when her mother was sick with cancer in Scotland, she called her every day and she started painting abstract "because it helped with my stress levels." She said, I had no idea what I was paintin'." Clarke adds, "That's the beauty of abstract. Everyone sees somethin' different.” She remembers one of her paintings where someone saw molars and someone else saw beer stains. "You could do a Rorschach test with my paintin's." 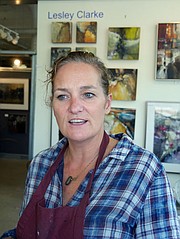 Lesley Clarke explains that she just lets the paint flow and then goes back and makes sense of it. She is juried artist at the Torpedo Factory, occupying a corner space with lots of light.

But it wasn't until a few years ago that "we could afford for me to paint. You don't make a lot of money." Clarke says you can go for months without selling a painting but then "last month I sold four." She has a lot of repeat customers. "In fact when I was gone recently in Scotland a lady came in and bought her third." This customer works so she always comes to the studio on weekends when Clarke isn't there. "I've never seen her. We joke we need to get together." Clarke is usually in her studio from Monday-Thursday from 10 a.m.-4 p.m. and on odd weekends. She says it takes a long time to get space in the Torpedo Factory. "I feel very fortunate. I love my third floor space in the corner. The light is fantastic, and there are so many nice people in this little corner. She says it is hard for artists to find a space and it's not easy to sell your art on the internet when people can't see it in person."

Clarke has had no formal art training. She went to school for accounting and "absolutely hated it." She joined the British Army in Scotland and met her Marine husband there on a joint exercise. She came to America from Scotland 24 years ago. She started at the Lorton Workhouse Arts Center in 2009 or so and they suggested she take an abstract art class at the Torpedo Factory. So she started taking classes and applied to the jury where she was accepted in 2012. In an average year there are about 80 applicants to become a juried artist with about about 15 chosen for their artistic excellence.

Clarke spent yesterday deciding what to do next. She is thinking about the seasons with migrating birds for the spring. "I'll know it is a bird, " she jokes. “It will be in the shape of a bird but not necessarily a bird you would recognize. Then maybe popsicles for summer” — more shapes than anything with primary colors — “and a pile of leaves with darker colors for fall. But my plan may change and that's OK or if the plan decides it's going to be something else."

She is a member of a group of abstract painters who work with a theme, "but none will look alike." Clarke focuses on layers and texture in her work. She pulls open a drawer and pulls out an onion bag, mesh from an old screen door and a small strip of a car smashed flat that she will use to add texture to some of her paintings. She said a man rides around Alexandria on a bike collecting these pieces of things for artists at the Torpedo Factory, and she points to a painting on her wall incorporating a piece of string. "Sometimes on the weekends the bike guy leaves me little surprises."