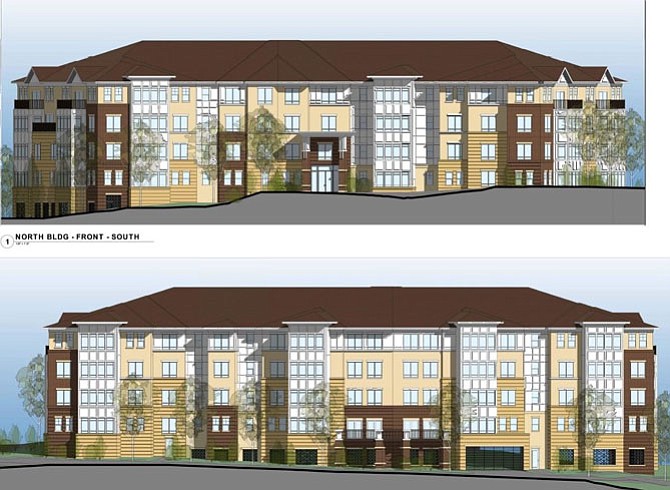 Although there were problems along the way, the Fairfax City Council last week gave the go-ahead for a residential development called The Enclave to be built at the Mantua Professional Center on Pickett Road. It consists of 80 condos in two, four-story buildings, each above a one-level parking garage.

“This will develop an under-used parcel of land,” said Councilwoman Janice Miller. “Our long-time residents are looking for this type of product so they can continue living here.”

Some office buildings, the New School of Northern Virginia and 181 parking spaces are there currently, and IDI-RJL Development LLC wants to construct The Enclave there, too. But to do so, it needed the site’s designation changed from business-commercial to mixed use.

Although the City’s Comprehensive Plan earmarked five more office buildings for that site, they’re no longer economically feasible in today’s market. So the applicant plans to replace them with condos; 16 of the units will be one-bedroom; 48, two-bedroom; and 16, three-bedroom.

THE CONDO BUILDINGS will be constructed on 3.8 wooded acres, off Silver King Court, in the area formerly envisioned for three of the office buildings. The land on which the other two office buildings would have been built will, instead, be preserved as open space for a village green used by the residents, school and existing office community.

At the June 23 public hearing, residents had complaints about parking, traffic and safety, building height, water runoff and affordable housing. The Council members were concerned about architectural quality, too, so they continued the hearing and their decision until last Tuesday, Sept. 8.

At that time, Paul Nabti, the City’s senior planner, detailed the most recent changes the applicant had made to the proposal. One was an amendment allowing residential, off-site parking – 32 spaces to be used by the condo owners during the adjacent office uses’ non-peak hours. Another was the addition of three more surface-parking spaces, for 128 total, and a ratio of 1.6 spaces/unit.

Regarding stormwater management, the developer proposed modifying two inlets directing water flow away from the Mantua community and the channel adjacent to Thaiss Park.

The City building height limit is 60 feet and, initially, IDI-RJL wanted to have a maximum building height of 75 feet. But it’s since reduced that number to 68 feet by enhancing and refining the design. And in response to residents’ requests, it flew balloons in August to show how high the condo buildings would be and how visible they’d be from Mantua. However, noted Nabti, “Some balloons couldn’t be seen because of vegetation, and they weren’t visible from Thaiss Park.”

The applicant will donate $40,000 to public schools and $30,240 to parks and recreation. And it’s increased its contribution to affordable housing from $216,960 to $275,000. In addition, more masonry will be added to both buildings’ facades. And either a digital, speed-control, traffic sign will be installed, if approved by Council, or the developer will give $6,000 for safety improvements to Pickett Road.

“We’ve worked hard in the 10 weeks since the public hearing,” said attorney David Houston, representing the applicant. “We’ve greatly improved the buildings’ architecture by adding brick, stone and high-quality window [design]. And stormwater runoff will go in a channel adjacent to the park and eventually into the county and Accotink Creek. Some will also go underground. We’ll also divert some of Mantua’s runoff into our system, so there’ll be 30-percent less runoff into the Mantua community.”

However, not all the residents were pleased. Jan Harrod, president of the Mantua Citizens Assn., said they wanted the balloons placed at the buildings’ corners and at their tallest height, “not 8 feet less, as was actually done. And we want them flown at the 68-foot height, too.”

She also wanted a developer-funded traffic system at the Silver King Court/Pickett Road intersection, plus a proffer stating IDI-RJL will maintain the stormwater-management system. The association’s secretary, Allison Ingram, wanted the left turn at that intersection to be made safer before the project’s built because “about 200 more people will be accessing Pickett from Silver King.”

AGREEING, Councilman Michael DeMarco urged the developer to look at safety there for pedestrians, too.

Resident Brian McNeill feared accidents could happen at the non-signalized, Silver King/Pickett intersection. But City traffic engineer Curt McCullough said the traffic volume and accident statistics there don’t warrant a signal. And Mantua’s Tom Hoffman said it’s not a real, mixed-use because “there’s no Chipotle’s or Peet’s Coffee there for the residents to go to.”

But Sharon Stahl recently moved from Mantua and would “like to stay in the neighborhood, but there’s no place to move. So I support this project.” Meanwhile, Jon Buttram, on the City’s Environmental Sustainability Committee, said the members want native plants used and some trails connected. They also want The Enclave’s LEED checklist expanded.

Councilwoman Nancy Loftus said the condos would result in less tree loss than the previously approved offices. And, she added, “I appreciate the changes the developer made in response to City and residents’ concerns.”

“This type of housing is in demand in the City right now,” noted Councilwoman Ellie Schmidt. “There are many positives to this project, but I encourage [the developer] to use low-impact, development techniques.”

“In June, there weren’t enough Council votes to enable this project to move forward,” said Councilman Jeff Greenfield. “But the developer has moved the needle far enough in the right direction so that we can approve this tonight.”

Finally, calling IDI a “well-respected, development group in the Mid-Atlantic region,” Mayor Scott Silverthorne said, “We don’t get that many developers of that caliber in the City, and I think the City will be better off because of this project.” The Council members then approved it unanimously.