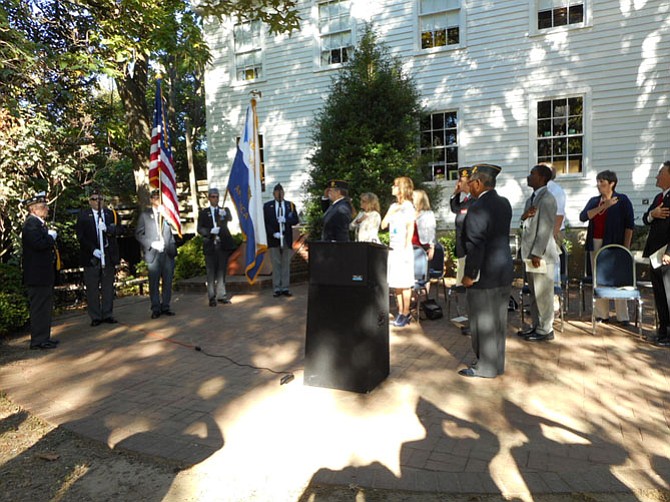 On a morning much like that of Sept. 11, 2001, the Vienna community commemorated the 14th anniversary of the terrorist attacks in the United States. In New York City, Arlington, and Shanksville, Penn., thousands of ordinary people and extraordinary heroes died as hijacked aircrafts plowed into iconic buildings and a lone field. American Legion Post 180 of Vienna hosted the annual “A Day to Remember” program on the lawn of Freeman House at 9 a.m. on Friday, Sept. 11. Vienna resident and Immediate Past National Commander of the American Legion Dan Dellinger shared his recollection of Sept. 11, 2001, as he and his wife waited in the Cannon Building when the planes hit.

More than 50 guests sat or stood at attention as the visiting American Legion Honor Guard presented the colors, and the Vienna Choral Society sang the National Anthem. Even walking or jogging through the Town Green paused during TAPS.

The bell of Vienna Presbyterian Church chimed at 8:46 a.m., calling to mind the moment that American Airlines Flight 11 struck the World Trade Center’s North Tower. Vienna Mayor Laurie DiRocco read the Town of Vienna’s proclamation proclaiming Sept. 11 “A Day to Remember,” memorializing those whose lives were “suddenly, without cause, and pointlessly taken from them … May they forever rest in peace and abide in our memories.”

Dellinger made note that life as we knew it before Sept. 11 is no more. “The determination of our enemies to attack us, to knock down our towers – and, by doing so, to cripple our inspiring American influence – is actually their twisted acknowledgement of American’s great and enduring value to the world,” Dellinger said.