Supporters outraged over lack of charges. 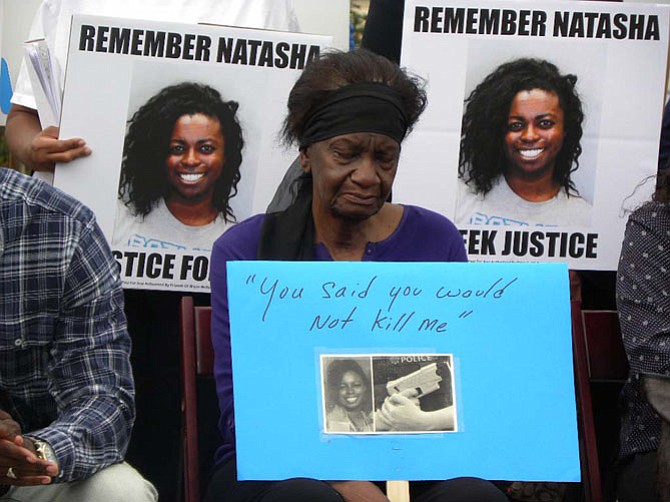 Natasha McKenna’s great aunt Eudora Paul carries a sign with McKenna’s words the day she was tasered by officers from the Fairfax County Sheriff’s Department. Photo by Abigail Constantino.

McKenna Family attorney Harvey Volzer holds up never before seen pictures of Natasha McKenna after she was tasered by officers from the Fairfax County Sheriff’s Department.

McKenna family attorney Harvey Volzer said that McKenna’s death was premeditated. “The day before, all members of the SERT team discussed how they were going to take her [from the detention center to the hospital],” he said.

“Anybody with half a brain could have handled this situation better, let alone, eight supposedly trained individuals in the adult detention center. What they did was outrageous and to think that they had spent the day before planning how to do this, is sorry,” said Volzer.

He said that there is no excuse for not using accepted protocol in every hospital and federal prison in the United States to chemically sedate agitated prisoners.

Instead, McKenna was tasered four times. Though no charges were brought to the officers involved, Volzer said he is still hoping.

McKenna’s death manifests the issues of race and the treatment of the mentally ill.

Shirley Ginwright of NAACP Fairfax County asked why McKenna’s case was not brought to the grand jury like John Geer’s. In her statement she called for justice, indictment and a change in law.

“Six white men attack a naked woman and we’re supposed to pretend that’s not in some way tinged by a racist history in this country,” said Cayce Utley of Show Up for Racial Justice of Northern Virginia.

“John Geer had a lot of public support. Where’s the public support for Natasha McKenna? Where’s the white folks outraged about that? We have policies and policing that treat people of color differently. This would not have happened to a white woman,” said Utley. Only a handful of people attended the rally.

Commonwealth’s Attorney Raymond Morrogh garnered criticism for the decision not to pursue charges in McKenna’s death. Morrogh is running unopposed in November.

“There’s a write-in section in the the ballot. Write Natasha McKenna in,” said Ginwright. “Vote him out.”

Mental health advocate Pete Earley said that McKenna was dehumanized even in death. “Mental illness is not a crime. It is not a death sentence,” he said.

“Condolences are not enough. Justice for Natasha is what we should give to her family,” said Ginwright.

McKenna’s mother, Marlene Williams was supposed to attend the rally but did not make it. Volzer read a statement from the McKenna family asking the community to “demand that elected officials and those paid to protect and serve do so with humanity, integrity and fairness.”

“We encourage you to write your local lawmakers and demand increased law enforcement training on recognizing the mentally challenged and on implementing procedures to protect these individuals while in custody.”

Natasha McKenna was a 37-year-old African American woman who died while being transported from the Fairfax County Adult Detention Center to INOVA Alexandria. During the transport, she was tasered four times and restrained by the Sheriff's Emergency Response Team. McKenna was diagnosed with schizophrenia at age 12.

https://www.youtu...">Video of Natasha McKenna and Police

Prior to her last encounter with law enforcement on Feb. 3, she had had incidents with the police on Jan. 7, 8, 14, 15 and 26, according to the Commonwealth Attorney’s report. She died four days later on Feb. 7.