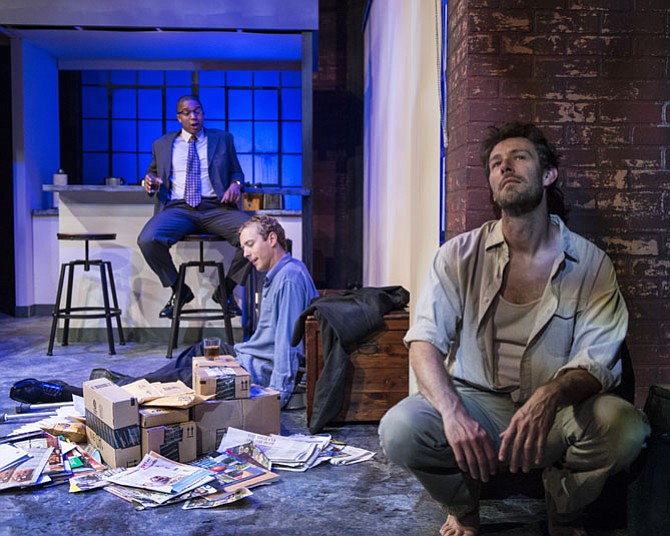 Crackling dialogue, powerful ideas and well-crafted artistry describe “Now Comes the Night” written by award-winning E.M. Lewis now playing at 1st Stage. The play is about the very personal consequences of living in a dangerous world, when harm comes through traumatic incidents.

In program notes, playwright Lewis indicated she wrote ”to try to understand things that I find unfathomable.” Director Alex Levy indicated: “I’m interested in plays that explore big human questions in specific and contemporary ways.” With an assured hand, Levy has fashioned “Now Comes the Night” into an intense, believable drama uncovering the damage done to a television news anchor who traveled to Iraq to try to understand what was at stake.

The time is 2006. Newsman Michael Apres (a taunt performance by Dylan Myers as a man in unbearable pain) has returned to his home after 18 months of captivity. The audience comes to understand that Apres is in the midst of crises. The symptoms of PTSD are clear.

Apres has given an interview to his former co-anchor Brad (Jaysen Wright; a solid, best friend, who will not let his old friend harm himself). In the interview Apres had made incendiary remarks criticizing American involvement in the Middle East. Brad has reasons to doubt the statements genuineness.

Thoughts, memories and visions flood from the emotionally mangled Apres, once he begins to open up. Was he naive going to Iraq? Who can he trust? What is real? And, who is the third man in the room? (Sun King Davis in the knotty role as either hero or villain).

“Now Comes the Night” is impressive technically; adding remarkable authority to the production. Set and costume design are both by Kathryn Kawecki. Kawecki provides the audience with meticulously detailed renderings of a man in a calamity. Lighting design by G. Ryan Smith gives off the passing hours from initial dark late night, to early morning muted light to the bright afternoon sun. Props by Cassandra Schulz and Rachel Barlaam’s sound design puts the audience right in the middle of a man’s muddled mind and the national politics of the moment.

Whether baby boomer or millennial, those interested in challenging theater by an award-winning playwright about life in times of living dangerously, “Now Comes the Night” will leave you pondering its crisply-presented, visually effecting, multi-layered point of view. The production is part of the D.C. area’s “Women’s Voices Theater Festival.”