Melaku Abraha loved walking. It was his favorite way to explore Alexandria, and family and neighbors in particular remember his frequent walks near his home on South Alfred Street. On March 28, at around 9:33 p.m., he was found conscious but badly injured just a block from his home. A robbery and assault left Abraha with serious head injuries. He was hospitalized, but his condition continued to deteriorate and four days later he died. 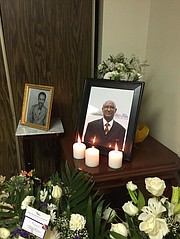 Photographs of Melaku Abraha at a memorial.

“He was the rock of the family.”

The first homicide of 2016 robbed Alexandria of a man who worked tirelessly to spread his love of education and civic engagement to those around him, according to family, friends, and neighbors. As one of the citizens living in the affordable housing being moved to make way for the expanding Alfred Street Baptist Church, he attended the discussions and encouraged his neighbors to be involved.

“If there was a community meeting, he was there,” said his daughter, Wintana Gebremariam.

Gebremariam said that any time someone from his home in Ethiopia would visit Alexandria, the first place he would take them was the river and the waterfront. From there, he’d take them to GAP to see if they needed new shoes or new clothes. But the next day, he would encourage them to be independent and explore the city on their own. On one of their first days in the United States, Gebremariam said Abraha told his children to go out and explore, and if they got lost, to read the maps and talk to people. Abraha told his children that people in this area were friendly and would help them if they asked.

Gebremariam remembered her father as an active reader and one who enjoyed passing on books to others. He would collect books and send them home to his family in Ethiopia, but every morning he would take the metro and read his magazines, and leave them there when he was done in hopes that someone else would read them too.

Neighbors recalled Abraha helping to shovel snow in front of their homes. It had become a yearly tradition for him. Lately, Gebremariam said she had warned him not to go out and shovel snow out of fear that it might strain his heart, but sure enough, she heard when she came to visit that several neighbors were grateful for him coming out into the snow and helping him shovel. If Abraha couldn’t do it, he’d find find someone who could. Zalika Cole, who lived near Abraha, said that he would arrange for his son to give her rides to the metro or into D.C. when she needed them.

Abraha’s walks were what Cole and other neighbors remembered best. Cole said Abraha was normally a man who seemed quiet and content to go about his business, but when he would walk by her home he would always say hello; asking each time how her day had been going.

Geri Baldwin, a local activist and friend, said that even after she’d moved away from the neighborhood, he always reached out to her and made her feel welcome. Cole and Baldwin said that, eight or nine years ago, South Alfred Street was a rougher neighborhood to live in, but that in the years since it had been improving into a close knit community.

“Years ago, it was rough, but it’s quiet now,” said Cole. “Everything’s changed, everything’s friendly. People get out and talk, that’s the kind of neighborhood it is. But I have a teenage daughter who walks to school, and I’m very worried now.”

In a central area of an apartment complex in western Alexandria, Abraha’s family and friends gathered to pay their respects.

“He was the rock of the family,” said his niece, Jerusalem Berhe. “He’s one of the best people you could meet.”

Police say they believe the crime was carried out by a single suspect, but so far no other information about the investigation has been released. Anyone with information about this crime is asked to contact Detective Bikeramjit Gil with the Alexandria Police Department at 703- 746-6751.