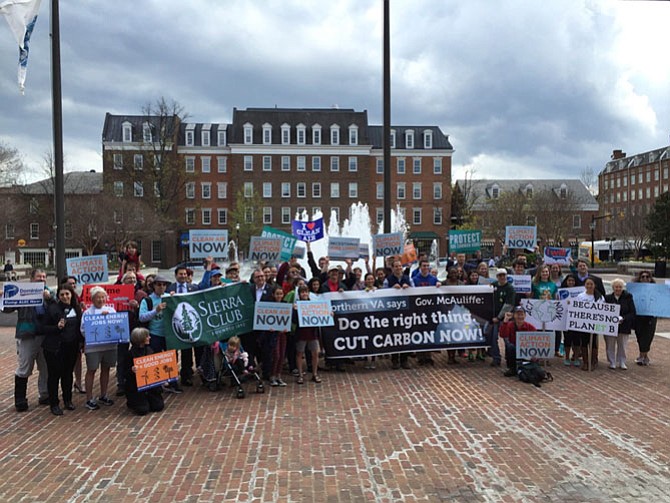 The Sierra Club and other local environmental groups gather for a clean energy rally. Photo by Vernon Miles.

A rally to support clean power, held in Market Square on April 2, was interrupted by a heckler denouncing climate change as a fraud. For attendees of the rally, it was an unexpected disturbance, but the legislators hosting the event say it’s par for the course.

“That’s what we’re dealing with in Richmond,” said Del. Alfonso Lopez who, along with state Sen. Adam Ebbin and freshman Del. Mark Levine, had just returned to Alexandria from a contentious legislative term. “It’s a mindset that says what scientists and academics say is wrong, and that any kind of change is wrong if big business says it’s wrong.”

Dr. Samantha Ahdoot, an Old Town resident and pediatrician, said she’s already beginning to see the impacts of a changing climate on her patients. Ahdoot pointed to longer and more intense allergy seasons brought on by more extreme seasonal shifts and the spread of lyme disease to regions where the disease-bearing ticks were formerly unable to survive. But in addition to health effects, Ahdoot says climate change has peripheral social impacts, referencing a case where a young man lost his home in Hurricane Katrina and his displacement made it difficult for him to adjust to a new home or study in school. Ahdoot warned that climate change-related flooding could add to the number of displaced youth and families throughout the country.

Stephen D’Alessio came to the rally from Arlington, and says he was motivated to get involved after hearing about lead poisoning in Flint, Mich. D’Alessio believes that climate change disproportionately affects disadvantaged groups, and agreed with Ahdoot that it is as much a social issue as it is an energy policy one.

Molly Pugh, an Alexandria resident and high school teacher, said she came out and attended the rally because she believes that the more people are involved, the more likely they are to spread a pro-green energy message to their friends and peers.

“It can be overwhelming [to be involved] as an individual,” said Pugh, “but we’re strong as a group.”