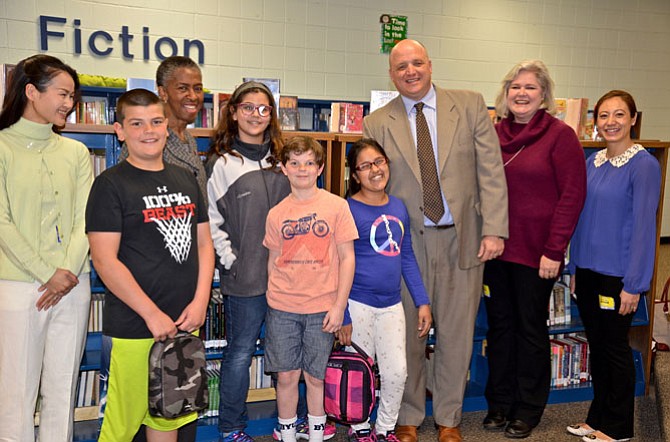 Adults, from left: Nozomi Hoshi, Hunter Mill District Supervisor Cathy Hudgins, Fox Mill Principal Brian Moose, Amanda Owens and Karina Cote are all smiles with a few of the Fox Mill Elementary students who participate in the school’s Japanese Immersion Program, where they are taught many core subjects in English and Japanese. Photo by Andrea Worker. 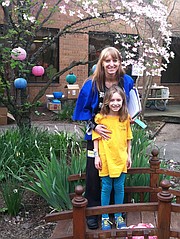 Matsuri 2015: Alison Malzahn and her Japanese Immersion student daughter Keira, now a third grader at Fox Mill, pose on the bridge at the school’s 2015 Japanese Festival. At the event, first-graders performed, showcasing their Japanese skills, and there were karate demonstrations, food samples, crafts and traditional Japanese games for all to enjoy. This year’s festival is scheduled for May 6. 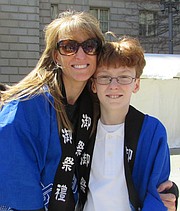 Fox Mill Elementary Japanese Immersion students will be performing on April 16 at the Sakura Matsuri Cherry Blossom Festival in the District. Last year, young Gavin, son of Alison Malzahn who co-chairs the school’s PTA Japanese Cultural Committee, performed in the event. Mom and son both sport traditional Japanese happi coats in the photo.

Two hundred forty-six first through sixth graders at the Herndon school are enrolled in the Japanese Immersion program at Fox Mill Elementary. That 246 represents an impressive 40 percent of the entire student population.

Hunter Mill District Supervisor Cathy Hudgins was the honored guest of the day, spending time with principal Brian Moose and several of the parents and students involved in the program. Hudgins was personally invited to visit the Japanese Immersion program in action by Alison Malzahn, one of the co-chairs of the school’s PTA Japanese Cultural Committee, who has a sixth-grade son and a third-grade daughter who learn some core subjects in both English and Japanese as participants. Hudgins was chosen because she was quoted by news station WTOP as questioning whether “Japanese immersion is our mission” in Fairfax County Public Schools.

Malzahn would answer a definitive “Yes” to that question. Enrollment in the program is by a lottery system, without prior testing or proven aptitude. “That means that ‘average’ students have the opportunity for exposure to an exceptional educational experience…that fosters future leaders who will thrive in an increasingly global economy. That is the outcome that parents are looking for from our school system,” insists Malzahn, who has no Japanese roots or any real ability in the language by her own admission.

PARENTS Nozomi Hoshi, Amanda Owens and Karina Cote agree with Malzahn, and all four moms say that increased confidence in both academic and life skills for their children has been another welcome, yet unexpected, benefit of what Owens described as “something of a gamble.” Owens’ roots are back in Kent, in the United Kingdom, and she said that the decision to place her daughter in the program “wasn’t easy.” And it hasn’t always been easy for her, but “it has really paid off.” Her daughter Elizabeth joined the immersion classes when she was in the first grade at Fox Mill. Today she is freshman at William and Mary, where her mom says “she is realizing just how good her Japanese is, and how unique this experience has made her.” Elizabeth was the only freshman chosen as a school delegate for a recent trip to Japan. Owens was so pleased at the results she has seen for her daughter that she was thrilled that her younger children – ninth- and sixth-graders - wanted to carry on the new family tradition. “My kids are very different from each other, but for all three of them, I have seen them flourish, grow in confidence. If this is a little edge we can help them get in their lives, I am glad we can do it.”

The immersion classes are also a way to build community, says Malzahn. Many of the students have parents in the military and the State Department, who have been or will be exposed to other cultures. “This helps continue that exposure or prepare them for future adventures.” Quite a few of the children have a parent who is foreign-born. “The program has given us a way to build and cross bridges with the entire family,” she noted. “Instead of living separated in pockets, we have found that our involvement in the program and our outside-the-classroom activities like the upcoming school Japanese Festival in May, have brought our diversity together.”

Japanese native parent Hoshi admits that getting involved has benefited her as well as her first grade daughter. “I know that my English is improving and it is good to make friends and be part of the community.” Hoshi and her husband chose to live in the area, despite his daily commute to Andrews Air Force Base, just so that their daughter could attend Fox Mill for the program. “I was trying to teach her Japanese at home, but she is doing better in both languages here with these wonderful teachers.” Mom Karina Cote thinks you can never learn too many languages or enough about other cultures. From a Japanese-Brazilian background, Cote can speak Japanese, Portuguese and English and, like Hoshi, chose the area largely for the reputation of Fairfax County schools, and for Fox Mill’s Japanese Immersion Program in particular. “Programs like these,” she says, “give our children the skills to face the changes and pressures of the future. They really learn to think creatively, outside-the-box, and in more than one language!”

“It is wonderful to see how these young students have progressed in their language skills,” observed Supervisor Hudgins after her visit. “Having introduced foreign language in our school as a parent PTA member, I understand the importance of foreign language as part of early and continuing education.”

HUDGINS expressed the hope that every FCPS student could have this opportunity, while acknowledging that her role in determining the future of such programs is limited. “While we have heard loud and clear from the supporters of the language programs, this message will, hopefully, not be lost on the School Board who must set their priorities and make their funding decisions.”

“We all realize that the budget is tight, and it’s only getting more difficult to fund all of the things our schools need,” said Malzahn, “but this program represents a miniscule portion of that budget, and gives back so much more to the students, the families and the community.