Herndon: The Taste of Mom’s Soup 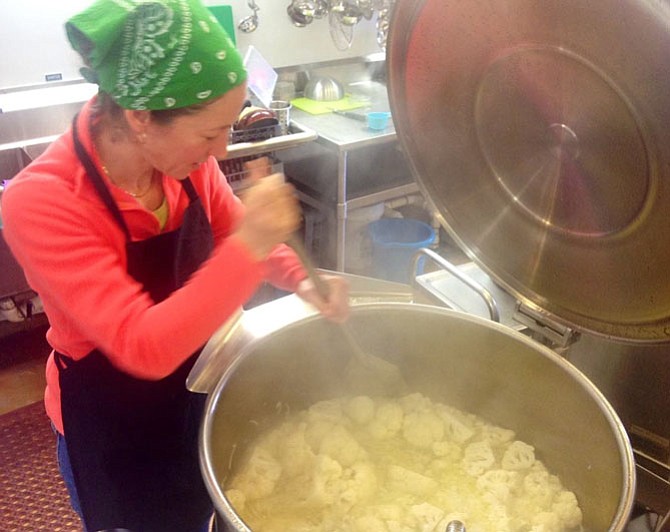 When you first enter Herndon’s iconic store, 100 Bowls of Soup, herbal fragrances surround you and they may even transform your ideas of soup. Next, you will notice a busy open and spacious kitchen, with several ladies chopping vegetables, stirring broths, and combining assorted ingredients into soup pots. Finally, if you have the chance, you can chat with Katharine Mardirosian, who started off her business at a farmer’s market and McLean’s Organic Butcher years ago.

Why soup? Well, as it turns out, Mardirosian says that soups “are the ultimate nourishing meal,” dishes she enjoyed as a child, especially on cold winter nights. But when she visited her mother-in-law in Romania and watched her make real chicken soup in a stockpot, her life changed. “With this slowly simmering simple meal,” she said, “her apartment became so aromatic, so full of goodness. I thought, ‘This is what food should taste like.’ It was my epiphany…comfort food beyond soothing.”

That inspired Mardirosian to make weekly chicken soups for her children. They embraced her homemade soups, though she admits her son was rather picky about his choices. “He’ll eat only minestrone, chicken soup and chili.”

Although not a professional chef, she began making soups in larger quantities from scratch, and experimenting with different flavors and ingredients, using citrus, various vinegars, and spices. Mardirosian tested various soups on friends and family, and began thinking seriously about a soup-making business, admitting that her first year was a real learning curve.

Her rather daring approach to soup making, however, has launched her from a small, at-home business with one or two outlets to a big storefront location with a large professional kitchen. And she attributes this final step forward to her intermediate setup in Vienna’s Maple Avenue Market, which features organic, local produce and wholesome products. There she was able to produce larger batches of soup and stock for wholesale and also sold freshly made specialty soups, all of which earned her a loyal customer base.

Now celebrating her first anniversary at her Herndon kitchen, she says that this effort has been very successful, with both the wholesale deliveries to the Mom’s Organic Market locations and her retail, in-store business rapidly expanding. The business also caters to area offices and a nearby private school. She has an active staff, all of whom are dedicated soup makers and have the ultimate goal of producing 100 varieties of soup. To date, says Mardirosian, they produce a core of 40 different soups, many seasonal, stocks and bone broths, making about 200 gallons a week.

She noted that among the favorites are the chicken and meat-based stocks, specialty soups, and such vegan offerings as French onion (made with mushroom stock), caraway cauliflower and a new Thai coconut sweet potato. “Our mission is to help people eat better food,” she said. “Having our own store and an open kitchen allows us to get face to face with our customers. We’re able to offer a full spectrum of soups that satisfy vegan, vegetarian, gluten free and paleo diets.”

Cauliflower, toasted caraway seeds and mustard give this soup its unique flavor and creamy texture.

Salt and pepper to taste

Chop roughly all the cauliflower, stalks and florets, and discard only the outer leaves

Meanwhile, gently toast the caraway seeds in a skillet. Cool briefly and grind in spice grinder until they become a fine, almost powdery. Add ground caraway, mustard, and a pinch of salt and pepper to pot. Turn off heat and puree with an immersion blender until smooth. Taste and season with salt and pepper.