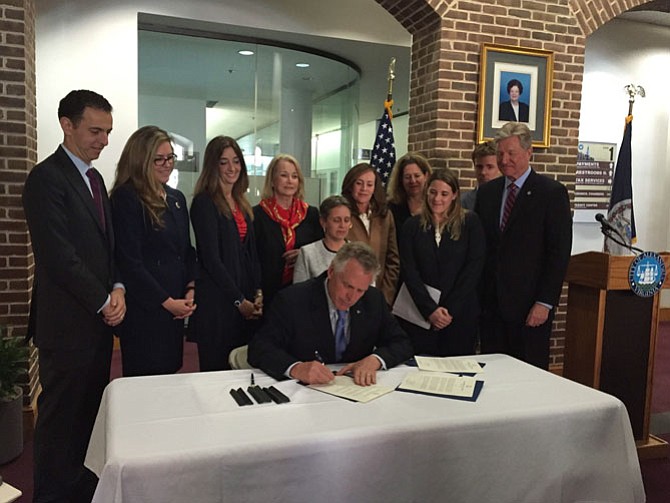 Flanked by gun-control advocates and Alexandria city officials, Gov. Terry McAuliffe signs a series of vetoes against legislation that would make it easier for victims of domestic abuse to obtain concealed weapons. Photo by Vernon Miles.

On paper, giving domestic violence victims under protective orders access to concealed weapons without permits or training may have appeared sound, but with his veto of a series of bills out of the Virginia legislature, Gov. Terry McAuliffe and others argued that adding more guns would only put more lives at risk.

McAuliffe signed the vetoes on March 7 at Alexandria’s City Hall. McAuliffe and the others who took the podium recognized that the intention of the bill was good. Mayor Allison Silberberg and Debbie Evans, Division Chief for Alexandria’s Sexual Assault Center and Domestic Violence Program, stood beside McAuliffe and spoke in favor of the veto.

In addition to an earlier executive order prohibiting individuals with permanent protective orders from owning firearms, McAuliffe said the vetoes aim to keep guns out of domestic violence situations. According to the Virginia Department of Health, in 2014 there were 112 family-related homicides. Sixty percent of the deaths came from a firearm in the home, and women were five times more likely to die in these scenarios than men.

“We must confront domestic violence head on,” said McAuliffe. “Adding guns is not the solution.”

Peter Ambler, former aide to U.S. Rep. Gabrielle Giffords and director of Americans for Responsible Solutions, said he believed that individuals could retain their rights and still have safety and common sense laws.

Evans noted that most women can already obtain concealed carry permits, and that the bill would only have removed the need for training.

“Concealed carry bills are not the solution,” said Evans. “Bringing firearms into a situation of domestic violence does not make the situation safer. The woman has a higher chance of being killed by the abuser if a gun is involved.”

“The weapon intended to protect the victim can just as easily be used against them,” said Evans. “This would have allowed more access to guns, both to victims and abusers. It would just make the situation more deadly.”