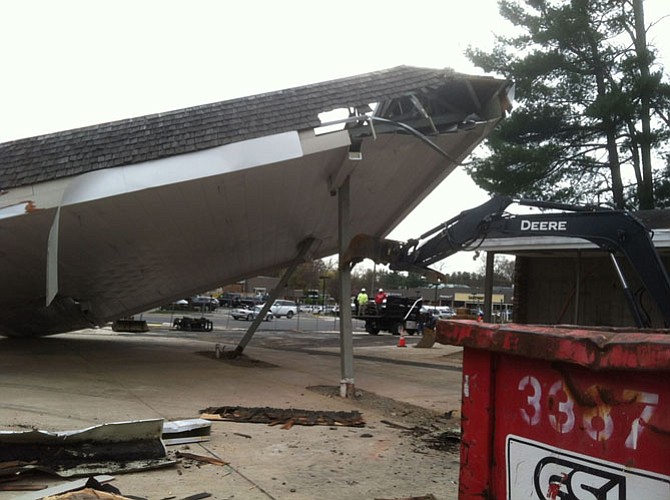 The approval of the drive-in bank was contingent that it did not interfere with the cleanup of the former Exxon site. Photo courtesy of Great Falls Citizens Association

Pumping and treatment of the Exxon cleanup will continue this year. A drive-through TD Bank will eventually replace the former station on Georgetown Pike. See www.gfca.org.

TD Bank, National Association and the landowner razed remnants of the former Exxon Station on March 31, according to Great Falls Citizens Association.

NOW: TD Bank hopes to begin construction on the new bank approved for the site in the fall. The opening is currently planned for February 2017.

The community called the site of the old Exxon Station, with environmental cleanup underway, an “eyesore.”

The site is set to become a new TD Bank, and recently, TD Bank razed and cleared remnants of the former gas station at the corner of Georgetown Pike and Walker Road, even though construction on the bank isn’t scheduled until the fall.

“I’m extremely grateful to them,” said Foust. “The site’s been cleared. It’s a significant aesthetic improvement. It’s still not what I call attractive, but it’s so much better than it was.”

TD Bank is planned to open at 9901 Georgetown Pike in February 2017. The 2,616 square-foot bank with two drive-thru lanes will replace the 1,781 square-foot service station.

“The demolition of the old Exxon station ... promis[es] the correction of a multi-year eyesore as the site is cleared for the eventual construction of a TD bank location,” according to the GFCA documents.

The Board of Supervisors approved TD Bank’s special exception (SE 2013-DR-001) on Feb. 25, 2014. The Planning Commission recommended its approval on the 27,426 square feet of property the month before, according to county documents.

“They anticipate starting construction in August and finishing in January,” said Foust.

“This project can not interfere with the clean-up effort, we made that a condition of the approval of the project,” said Foust.

“The old Exxon station site has been the focus of groundwater contamination clean-up efforts for the past few years. Those efforts will continue at this site, as well as across Walker Road underneath the shopping center parking lot to which the contamination has spread,” according to GFCA documents.

A SPECIAL COMMITTEE of the Citizens Association reviewed the groundwater monitoring report issued for second quarter 2015 by Fairfax Petroleum and its environmental engineering contractor, Kleinfelder East. The report was received from the Virginia Department of Environmental Quality.

At the time, GFCA and Glen Sjoblom, chair of the GFCA special committee, predicted that pumping will need to continue for another four quarters.

“We will keep being vigilant until the problem goes away,” said Sjoblom.

Approximately 256 pounds of Methyl Tertiary Butyl Ether (MTBE) have been removed since pumping and treatment began in August 2014, according to the Great Falls Citizens Association.

Concentrations of the chemical were more than 10 times the target level in at least one spot.

Even low levels of MTBE can make groundwater undrinkable due to its offensive taste and odor, according to U.S. EPA documents.

Leaks were detected from the vapor recovery units at the gas station in 2009, said Sjoblom.

MTBE was the gasoline additive used under direction of the EPA prior to 2006, and a leak released the chemical from the former Exxon Service station into groundwater.

The groundwater has been treated by pumping it out for air stripping and by charcoal filtration in a special treatment trailer, and the treated water is released below discharge limits to the storm drain.

Pumping and treatment of groundwater from wells on the original site began in August 2014 in accordance with the Department of Environmental Quality Corrective Action Plan.

“It doesn’t take a very big leak to cause a very big problem if you have an area that has private wells,” said Sjoblom.