Inside Alexandria Police Department: On the Job
Votes

Inside Alexandria Police Department: On the Job 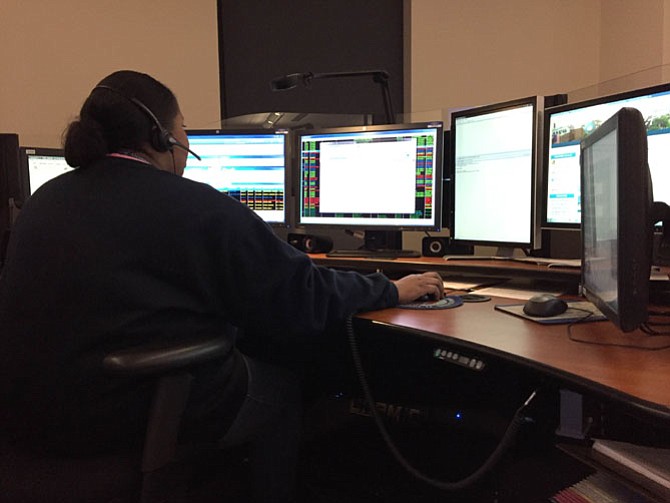 At the 911’s Police dispatch desk, Kimberly Welch screens calls for the police and sends coordinates with patrol officers. Photo by Vernon Miles.

The Alexandria Citizens’ Police Academy is a 10-week course hosted by the Alexandria Police Department (APD) to offer citizens a better understanding of how the department works. Throughout the course, participants sit in on emergency calls and ride along with police officers on patrol.

In the fifth week of the course, citizens got a chance to apply last week’s training in use of force in high-tension simulations and to see the 911 call center in action.

I saw someone in jeans come out of the bushes with a gun drawn, aimed right at a man on his knees. I’m told the man with the gun was shouting but I couldn’t hear him, my mind was wholly focused on the gun. I was shouting at him to drop the gun, and when he finally heard me he turned, gun still in hand, and I pulled the trigger. The shot hit him in the chest, and the man on the ground immediately reached up to grab the other man’s gun, so I shot him as well, both fatally.

It was a tough situation, but I thought I’d made the right call: until the simulation ended and the inspector played the video back. On closer inspection, the other man with the gun had something on his hip: a badge.

The training program is set up in a small room in the lower floor of the Police Headquarters. The trainee stands in the center of the room, facing a one of countless video scenarios filmed in a police department somewhere across the country. Each video has several branching scenarios, which can be adjusted by the trainer sitting at the computer based on his evaluation of the trainee’s actions. In one scenario, for example, one of the citizens going through the training wasn’t being forceful enough with a person who came to an office to argue with his significant other. The situation continued to escalate as the trainee struggled to assert himself until eventually the other man drew a gun and fired at the police officer several times while the trainee fumbled with his holster.

Many of the scenarios involve use of force, both knowing how and when to escalate a situation, and knowing when to de-escalate. After each use of force, the officers have to articulate to the trainer why force was used in that situation.

The situation of pointing a weapon at another officer, or even firing at an officer, is called a “blue on blue,” and Sgt. Patricio Alvarez says it can happen in tense situations. At the Navy Yard shooting in 2013, police were slowed down by communications errors. In Prince George’s County, Md., a police officer was killed on March 14 by friendly fire from another police officer after the police station was attacked by gunfire.

“You have to understand de-escalating as well as escalating,” said Sgt. William Mayfield after one training situation that originally involved a peaceful resolution ends, the second time, with the suspect physically assaulting the officer. “No call is routine. This is why the academy is so important. It’s vital to see this as a snapshot of police life.”

So what happened? Unfortunately, there’s very little resolution to most calls in the 911 center. In some ways, it’s like picking up a mystery book with the last few pages torn out. Later, the 911 center gets a call back. The family member was eventually found at a local hospital in a different county, but why was the car in Alexandria? Who had made the phone call?

Kimberly Welch, a 911 operator, said that’s one of the most aggravating parts of the job.

“It can be frustrating because you hear the beginning of a story but not the end,” said Welch. “But other times, the whole story plays out across the 911 center.”

Noise complaints about a party, for instance, sometimes escalate into domestic violence calls later in the evening. One domestic violence call that evening started with a woman telling her husband she was leaving him and ended with her in the hospital and him in jail for assault. Welch says it’s the domestic calls that are the hardest, especially ones where children are involved. The 911 operators are the first person many of the victims are reaching out to about these very sensitive issues, which requires the operators to be more than just a switchboard. Sometimes a call will come in with someone just asking them to send the police to an address without any further explanation, but Welch explains the system doesn’t work that way.

“We’re here to help, we’re not just working the phones,” said Welch. “Expect to answer a lot of questions, but it’s so that we can send the right resources. Every question has a purpose. It helps give the police a better idea of the situation.”