Lions and tigers, maybe not. But bears we got. 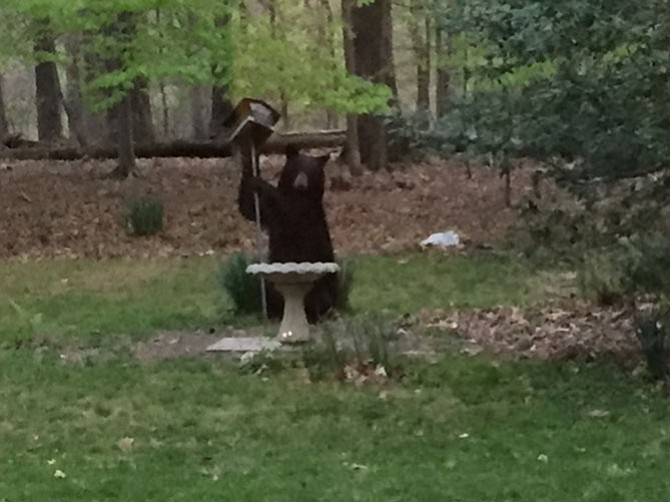 A black bear finds its way in Doug Harbrecht's backyard.

Yes, Virginia, there are bears in Great Falls. Behold the black bear that spent almost 40 minutes in our backyard at dusk on a warm April evening recently, shaking the bird feeder for seeds, sniffing around for food, at one point lying down and burying his snout in his paws as if he were getting ready to take a nap.

Our paths crossed purely by happenstance. I had arrived home from work and as I exited the car and went to unlock the side house door, there he was, on all fours no more than 20 feet away, with a sideways glance “what’s up with you?” look on his face.

This was no “oh, look it’s a dark, furry dog who must have gotten loose” moment. This bear had to be at least 7 feet long. I rushed into the house yelling for my wife to come see. The bear subsequently agreed to an extended iPhone 6 photoshoot, him outside striking poses, us clicking from the back windows.

Here is why this moment is so special to me and I hope it is to you, too:

We have lived in Great Falls for 34 years. Yes, there are occasional bear sightings, especially in the spring. That’s when young black bears wander down the Potomac River from the Shenandoah Mountains and make their way up the creeks and tributaries into our wooded enclave looking for food and a mate. But photographs are rare (there’s an iconic shot of one bolting across Georgetown Pike from the 1980s, but it’s a little blurry.) Think about it. Great Falls is a suburb only 20 miles from the White House, Capitol, and Supreme Court. The bears in our midst are a vivid reminder to me that it doesn’t take much to conserve wildlife if we give animals the habitat they need to survive.

Doug Harbrecht, of Great Falls, sees a black bear in his backyard.

Do you realize how lucky we are to live in a place with so much wildlife? Let’s not argue about the deer. You may not like the deer. It doesn’t concern me in the least that deer think hosta and azaleas are a salad bar. We just plant landscaping that deer don’t like to eat. Here’s what’s amazing: Over three decades, we have been living a National Geographic Channel reality TV show—sharing our woods not just with Bambi, but with hawks, kestrels, owls, turkeys, migrating warblers and song birds, red and gray fox, bobcats, beavers, skunks, raccoons, chipmunks, snakes, turtles, even heard the howl of coyotes. Most people have to go to national parks to enjoy the diversity of wildlife many of us seem to regard as a nuisance.

Sadly, I don’t think some people in Great Falls appreciate what we have. I cringe whenever I pass a 2 or 5 acre lot that has been clear cut, every tree bulldozed and carted away, for another tract mansion. Now I’ll be thinking: Fat Chance they’ll ever see a bear in their backyard.

Harbrecht is a career journalist who has written for Business Week and National Wildlife Magazine, among other publications. He is a former President of the National Press Club.