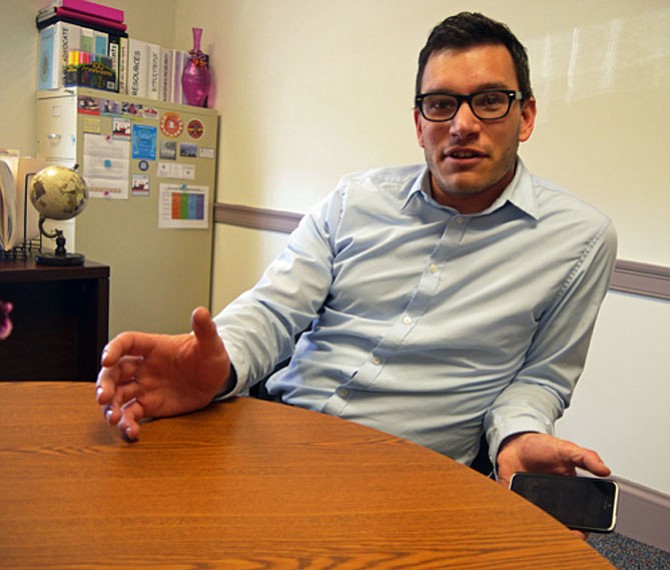 Chris Davies, supervisor of Counseling Services for the County of Fairfax, says there is a long way to go with this issue but he sees much more coordination than several years ago: “It is important to know where we have found success.” Photo by Shirley Ruhe.

This story is part of a series that is focusing on child sex trafficking in Northern Virginia.

"When I was growing up the boogey man was tangible, something I could see. But now it is intangible with teenagers trusting what they share on the internet with no idea there are bad motives." 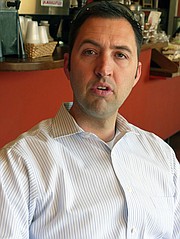 Detective William Woolf says there is evidence of teen sex trafficking in every high school in Fairfax County.

Elizabeth Payne, coordinator for Health, Family Life Education and Physical Education for Fairfax County said, “The human trafficking court cases started breaking in 2012 and involved so many of our students. The court cases just kept coming. We had to act. We had to ask what did we have in place. As a result, a new curriculum was designed for grades 6-12 grades that incorporated human trafficking into the regular lessons. It involved getting school counselors and resource officers up to speed. We had to train school psychologists. All of this snowballed." In addition, "we had to get over the shock and the myth that it doesn't happen here."

In the summer of 2013, a video was produced to examine the issues and detail the trafficking recruitment process. In March 2014, the new lessons were completed. Payne said all schools were required to have a preview night for parents where the new program was introduced. “Sex trafficking is embedded in the lessons about abuse and community safety," she said. Some parents, mostly of sixth graders, she said, reacted with "My child is too young for this, it isn't happening here, or my child doesn't need to know this." When staff explained the time between 6th-7th grade is when the students gain more independence and may be left at the mall for an hour or two, the messagr seemed to reach the parents.

Payne said the system is starting to yield results. She said she spoke recently to five middle school girls who had run away and were at high risk. "They said no, no, no problems to me but as soon as I left it was reported to me they started talking about their concern about friends. There is a lot of shame associated with this and the trafficker may have threatened them. But we are finding sometimes they will go to a trusted adult at school," she said.

Arlington Public Schools updated its curriculum last year according to Deborah DeFranco, supervisor of Arlington County Public Schools Health, Physical and Driver Education & Athletics. "Arlington Public Schools has specific health units on human trafficking in grades 7 -10. Since it is part of the PE curriculum instead of Family Life, we didn’t go through the same procedure as Fairfax County of parental notification — the opt out option and community input. We know sex trafficking is out there and we wanted to get out ahead of the problem. There are so many myths out there; we wanted to give the students facts,” she said.

In addition, DeFranco is participating in the Northern Virginia Regional Human Trafficking Task Force. The result of the group's work will be updated and incorporated into these units of study. “It is close by,” she said. “We know it is happening locally in south Arlington.”

She said they had members of the Arlington police gang task force talk to the teachers last spring about known incidents, arrest and inquiries in Arlington. DeFranco added, “We are working on sexual violence prevention. When a child comes to report, they can experience double victimization and we need to be aware of that to avoid it happening. I feel that Arlington Public Schools is ahead of the curve trying to bring awareness, education and prevention skills to keep kids safe from this dangerous trend in the secondary health curriculum.”

Education can take place in many different ways.

U.S. Rep. Barbara Comstock, who was involved in the enactment of legislation increasing penalties for trafficking while serving in the Virginia state legislature, said, "I try to inject this information wherever I am. You realize it is going on in your community so if you drive up to a hotel and see some creepy dude with three girls, start talking to them. What's your team or some conversation. You get vibes."

Chris Davies, supervisor of Counseling Services for Fairfax County remembers a story of someone who saw an older man drop a pick-up line on two young girls in a mall. After the man left, the person went over and told the girls what he had heard. He gave them the Just Ask website and the National Center for Missing & Exploited Children (NCMEC) human trafficking hotline (1-800-THE-LOST) in case they thought they might have been approached for sex trafficking.

“The community needs to know what to look for as part of the solution.” Davies said. “And the community also needs to change their own biases about who we might see as a prostitute.”

Beth Saunders approaches it from the business community. Saunders is president of Just Ask, a non-profit that was created specifically to work in Northern Virginia on education and prevention of teen sex trafficking. Saunders says the organization is broken up into sectors managed by volunteers and she is in charge of the business sector. "This is important because many of these kids' parents work in businesses. They can update their employees on the facts about trafficking."

Just Ask also has board members responsible for outreach to schools, churches and law enforcement. "When I was growing up the boogey man was tangible, something I could see. But now it is intangible with teenagers trusting what they share on the internet with no idea there are bad motives," Saunders said.

She emphasized, "The thing that matters for an organization like ours is hard core data like we got from Detective Woolf in law enforcement. People don't care what we think; actions have to be based on facts, statistics."

Woolf says churches also play a role in education because “it is also a morality issue and we’re not educating kids on what sex is.”

Deepa Patel, director of Trauma and Hope in Springfield, says sexual normalization is a huge problem: “It’s OK for girls to wear skimpy outfits and they slap each other on the butt which is perfectly acceptable for them. Rappers talk about money, sex and power as the three things you need and pimps on TV are glamorized.”

Michelle Knight, Social Justice and Outreach Minister for Our Lady Queen of Peace Catholic Church in Arlington, says the church had a program Feb. 12 focusing on sex trafficking because churches have a responsibility. “We want to raise awareness, and it is a much bigger problem around here than most people think. I don’t know if we are doing enough but we should be letting our youth know so that they can ask each other what’s going on.” She said that churches teach respect and dignity — that each person is special and loved by God and it gives less of a need to respond to the traffickers.