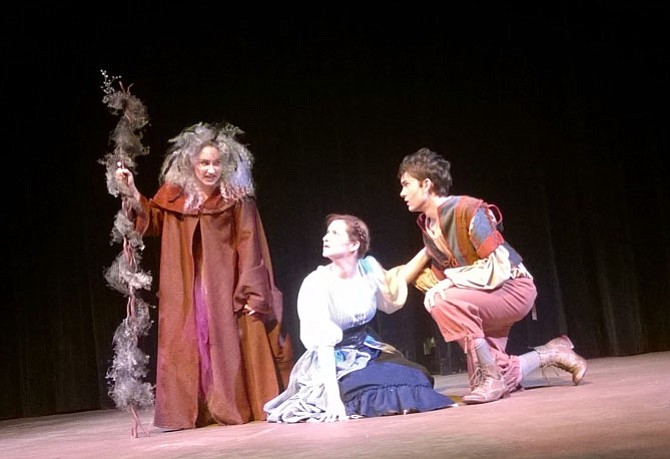 From left: The cast of “Into the Woods” is led by high school seniors Madyson Hanton as the Witch, Julia Mahon Kuzin as the Baker’s Wife and Matthew Cook as the Baker. Photo by Marti Moore/The Connection

At first glance, it seems “Be careful what you wish for” is a lesson taught by local high school students as they take their audience “Into the Woods” for two consecutive weekends May 6-14 at the Russell Theater in Robinson Secondary School.

Cinderella wishes to attend the King’s festival, a poor boy named Jack wishes his cow would give milk, a Baker and his Wife wish for a child, Little Red Riding Hood wishes for bread and Jack’s mother wishes for gold.

Which wish shall the old Witch grant to her needy storybook characters in the enchanted forest?

Only time will tell.

Exactly three days to the stroke of midnight is what the Witch gives the Baker and his Wife to deliver four ingredients she needs to concoct a magic potion and break their curse of infertility:

the cow as white as milk

the cape as red as blood

the hair as yellow as corn and

the slipper as pure as gold

THE BAKER AND HIS WIFE venture “Into the Woods” with their grocery list for an errand that is not as simple as it seems.

Both are hungry like a wolf to make their wish come true — so much it leads them on a bloody caper to snatch clothing from Little Red Riding Hood.

Time and opportunities slip away from the Baker’s Wife during her biological clock’s countdown to midnight as she makes one desperate attempt after another to steal a golden slipper from the elusive Cinderella.

Like the witch’s brew, this musical is a dark blend of traditional fairy tales and the Brothers Grimm classics “Cinderella” and “Rapunzel.”

Assistant stage manager Quinn Moore, 16, believes the moral of the story isn’t about wishes at all.

“Be grateful for what you have” is the real message as this 10th-grader explains the characters “don’t realize what they have until it’s gone.”

This stage production of “Into the Woods” commands a crew of 52, a cast of 41 and a live orchestra of 17 high school students — directed throughout six performances by Robinson’s drama teacher Megan Thrift and band leader Andrew Loft.

They are the Rambunctious Theatre Company — a name Thrift coined two years ago to give the Robinson Drama Department a spunky name that pays homage to their school mascot: the ram.

THE CAST of “Into the Woods” is led by high school seniors Madyson Hanton as the Witch, Matthew Cook as the Baker and Julia Mahon Kuzin as the Baker’s Wife.

Each of these veterans can count on their Robinson resume nearly a baker’s dozen, if not more, of theater productions since middle school.

Although Kuzin plans to study engineering next fall at Virginia Tech and Cook is considering his options at the Lewis & Clark College of Arts and Sciences in Portland, Ore., Hanton will pursue her passion for the performing arts and a bachelor’s degree in musical theater in Philadelphia at The University of the Arts.

Cast members agree “Into the Woods” will appeal to fans of gothic novels, fantasy and the popular ABC Television Network show “Once Upon a Time.”

The musical was created in the 1980s by Broadway dream team James Lapine and Stephen Sondheim. Their muse was a 1970s psychological study about the meaning of fairy tales, especially ones written by the Brothers Grimm that can frighten little kids.

This Pandora’s box released several fairy tales “Into the Woods” creators contained by weaving them into a narrative of their own, filled with recognizable children’s storybook characters.

A film adaptation was released at the end of 2014 and received critical acclaim within a few months at the Golden Globes and the Academy Awards.

Learn how wishes can have unintended consequences and find out why the magic potion is so important to the ugly Witch May 6, 7, 12, 13 and 14 at 7 p.m. at 5035 Sideburn Road in Fairfax.

A special child-friendly matinee May 14 will entertain kids at 2 p.m.

Tickets start at $10 for students and $15 for adults. The one-day matinee costs $5 for the show only — or $10 if kids choose to hang out with the cast and crew afterward during a fun fairy tale festival.