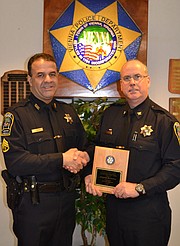 On April 13, 2016 Sergeant Tu Farhan received the 2015 Rotary Club of Vienna, Rotarian M. Jane Seeman “Service Above Self” Award. He was presented with the award at a banquet which was held at the Westwood Country Club to honor public servants of the Town of Vienna. The award is given annually to a member of the Vienna Police Department whose motivation, commitment and service to the community exemplifies the Rotary Club’s motto of “Service Above Self”. Sgt. Farhan has been an accomplished Officer, Detective and Supervisor. He has volunteered for many additional duties to ensure that the citizens of Vienna are provided with an excellent level of service. Sgt. Farhan is fluent in five foreign languages and he routinely uses his linguistic skills to assist officers with translation which helps to bridge the gap when language is a barrier. This skill set allows the police department to better serve its diverse community. Sgt. Farhan has also helped to solve numerous local, state and federal cases within the National Capital Region by using his extensive investigative abilities. Sgt. Farhan continually challenges himself and others to improve performance by researching best practices and making training a priority.