Committee pieces together the controversial history of historic Alexandria site. 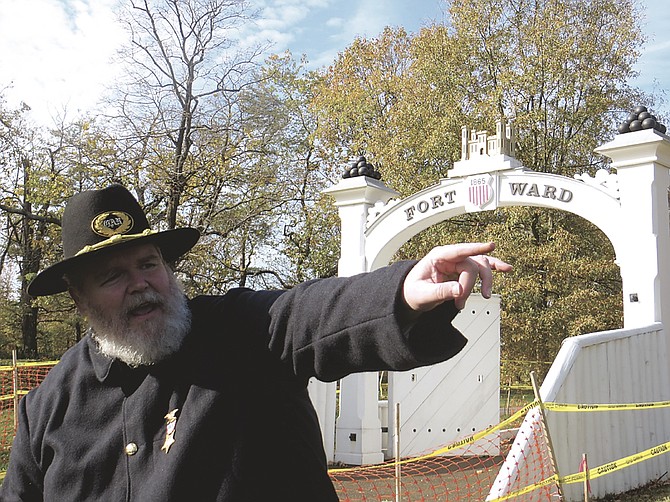 Alexandria’s Fort Ward has a long history, but resources to commemorate that history are limited. Its most famous as one of the best preserved Civil War fort from the defense of Washington, but locally the fort’s use in the years after the Civil War as an enclave for freed blacks left a huge mark on the city. Before European settlement, there’s also archeological evidence of native american activity in the region. It’s a long and complicated story, and it’s up to the Fort Ward Interpretive Planning Committee to figure out how to tell it.

On Jan. 24, 2015, the City Council approved the Fort Ward Management Plan to provide strategic guidance for the management of the park’s resources. The committee has three main tasks: to identify the themes and stories of the park, assist in selecting an appropriate consultant that will enhance public knowledge of the park, and a plan for educational techniques taught at the site.

Chuck Ziegler is one of the group’s Civil War buffs.

“It’s a complicated issue,” Ziegler said. “There’s several layers of Fort Ward history, even going back to a few native american remains… We have to be cautious and parsimonious with our resources. We need to provide good background, but we’re not telling the full story of the Civil War.”

Fort Ward saw no major combat during the war, but Ziegler says this doesn’t diminish its role in history.

“Fort Ward didn’t see action as such, but it’s the best preserved of all the remaining Washington defences,” said Ziegler. “It was important. Look at the Cold War, I remember looking at the Titan 2 missile silo. It’s scary, these things were ready to be used. They weren’t, but the point is they were ready to be used. That’s a part of history… it’s what didn’t happen that’s just as important.”

For Ziegler, and many in the group, the main focus of the project should be on the Fort’s Civil War history and the history of the black community that helped build it and settle there afterwards until they were forcibly ejected from the land during the Civil War centennial to establish the park. But when the black community living in Fort Ward was pushed out, the graves of their families were left untended and unmarked by city authorities. A contentious piece of the Fort Ward plan has centered around efforts to find and mark those bodies before the area becomes even more of a tourist destination.

Adrienne Terrell Washington and Carol Johnson, members of the Fort Ward and Seminary African-American Descendents Society, also serve on the Committee to represent the interests of black Alexandrians whose families remain unmarked beneath Fort Ward.

“We formed the Descendants Society because we weren’t being heard,” said Washington. “We consider ourselves stakeholders, because that was land that belonged to our ancestors.”

Washington says the Descendants Society has asked for three things: to find as many missing graves as possible, to abate the stormwater runoff that’s been eroding the graves, and have their history included in the park in visible ways.

“When people go to that park, they think it’s all about the Civil War, but it’s not just that,” said Washington. “A community came out of that, preserved that land, and were buried in that land. We want to see something in the museums that speaks to that community.”

For Washington, options for inclusion into park history could from a walking trail to the inclusion of artifacts from the black community included in exhibits.

“We want to make sure [they aren’t] destroying that history, and erasing all of the family life, who we were as a community,” said Johnson. “We want that history preserved.”

Johnson noted that it was originally black Americans who built the fort. Johnson and Washington are both descendants of black soldiers who fought in the Civil War and moved into the community after the war was over, while other family members had been at that location even before the war.

“Our community is a perfect model of what happened through reconstruction and into the early 19th century,” said Washington. “Our community has been involved in every major part of the African-American experience in this country. It is an American story, it includes everyone. It doesn’t exclude anyone and we don’t want to be excluded.”

Over his time working on the committee, Ziegler says the thing he’s learned the most about has been the black history at the site.

“I’ve learned a lot, especially about the African-American community,” said Ziegler. “If you went to Fort Ward five years ago, you wouldn’t know anything about that. This was established as historic park with the Fort as centerpiece as part of Civil War bicentennial.”

The challenge, however, will be finding the funding to pay for the park improvements.

“We’re going to operate in constrained resource environment,” said Ziegler. “The City Council is rightly concerned about infrastructure improvement and the backlog of ongoing maintenance issues. So there are questions about how we allocate those limited resources appropriately.”

But while Ziegler said limited resources will likely force the group to limit the history to the Civil War and the black community’s history at the site, Johnson noted that there’s still history at Fort Ward that precedes the Civil War.

“Another unspoken area in terms of history with the interpretive plan [is with] native Americans, who were very much a part of the northern Virginia area,” said Johnson. “There is evidence of arrowheads through archeological digs there. It is a wide story. We’re proud of it and we want people to understand that this is part of Alexandria not just from a colonialism perspective.”

For Washington and Johnson, the challenge of the process has been dealing with the City side of things.

“The City is going to do what it wants to do,” said Washington. “You can’t fight city hall.”

“It’s about understanding of the City process, whether Fort Ward or any part of the City,” said Johnson. “It’s a process and it’s a commitment to see things through to the end. We’re trying to help get this written into history books.”

Ziegler shares Johnson and Washington’s concerns, but remains optimistic about the end goals.

“It always takes longer and is more expensive than you imagine,” said Ziegler. “It’s not without its controversies but I think we’ll be alright.”