Board pledges to develop recommendations for the involvement of citizens in the land-use process. 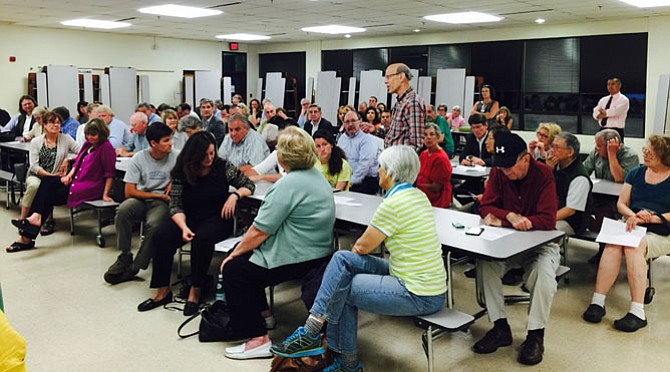 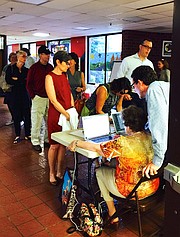 The county’s Planning Commission is scheduled to hold a public hearing on a redevelopment proposal for Brooks Farm, a 52-acre site off Springvale Road on Jan. 21. GFCA is scheduled to hold a meeting on Jan. 19 to hear the developer’s changes to its plan. Members of Great Falls Citizens Association line up on May 12, 2015 to vote on the proposal to develop Brooks Farm.

Bob Vickers, this year’s Lord Fairfax for the Dranesville District for his work preserving trees, said cluster development is sometimes better for the tree canopy.

Basheer/Edgemoore-Brooks showed the latest proposal to develop 52 acres off Springvale Road. They asked the Planning Commission to reschedule a June public hearing for the fall so they could continue addressing community and Planning Commission staff concerns.

Great Falls Citizens Association is holding a Town Meeting on Tuesday, after The Connection’s presstime, to address “negotiations over certain issues” regarding the proposal submitted to develop Brooks Farm. The Planning Commission is tentatively scheduled to make its recommendation on Wednesday, May 18. GFCA still opposes the proposal. 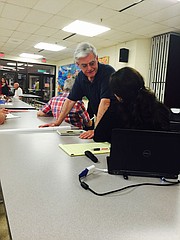 Dranesville Planning Commissioner John Ulfelder said the resolution against the development was premature. Here, Ulfelder talks after the meeting with GFCA’s Land Use and Zoning Chairman Jennifer Semko.

The Board of Supervisors gave final approval for 19 homes to be developed on Brooks Farm, along Springvale Road and Forest Lake Drive. The Board also gave voice of approval to the thousands of hours 1,400 Great Falls residents advocated for stormwater management, tree preservation, well water, stream valley protection, and other environmental features of the property around Walker Lake.

“I believe the applicant got it right, but I have to say I feel it should not have taken so long and the community should not have had to work so hard to get to this point,” he said.

“Many have spent countless hours the past two years exercising their responsibility as residents of the community and the entire community. And you deserve a thank you for your efforts, that’s for sure,” said Foust.

Great Falls Citizens Association president Bill Canis suggested that the Board create a group of interested citizens who to develop citizen recommendations to improve the land use process and the involvement of the community.

“Citizen involvement has reached a new high in our community,” said Canis. “If this county wants to retain citizen involvement in the land use process, there are, no doubt, steps that can be made to make this process more transparent and available to residents who have day jobs and don’t have attorneys or specialists to help them.”

Chairman Sharon Bulova applauded the idea as, “something that I and members of this Board have been discussing.”

TWELVE REVISIONS of the original proposal to develop Brooks Farm were needed to reduce the number of houses proposed on the 52 acres from 23 to 19.

More than a dozen people testified at the Board’s public hearing, both for and against the proposal, on July 26.

“You get a sense of the importance of the environmental issues that have collectively dominated the discussion on this application,” said Greg Riegle, attorney for the applicant. “It’s a perspective that frankly the applicant shares.”

“In all the years I’ve been around this process, I’m not sure I’ve seen a deeper collective dive into the issues with all the stakeholders involved,” he said.

James Trent, president of the Forest Lake Homeowners Association, was not convinced after the two-year-process.

“The process has not been collaborative, transparent or cooperative despite many meetings. The process has been driven by individual agendas and legal expediency and not common sense,” he said. “This flawed process has generated an action but not a viable sustainable solution. As a result, the vast majority of the community opposes the proposed development.”

Claude Anderson, a neighbor of the owners of Brooks Farm and the property, said he’s often asked if he supports the development.

“I think to myself, ‘Why would anyone in their right mind support the development of such a beautiful piece of property.’ But I answer, ‘Yes, I do support this development based on first hand knowledge of the challenges faced by the Brooks family.’”

He called agricultural horse-property “out of place” with the growing affluent Great Falls suburb. “We all hoped that a single buyer would build an estate on the property, but I did not win the Mega Million or the Power Ball,” said Anderson.

Elyse Turkeltaub said “We moved into Great Falls over 20 years ago because we loved the quiet woods, the presence of horses behind our house, and the 52 acres of Brooks Farm and all the wildlife that live on and around the property.

Our first choice, of course, is everything stays as it has the last 20 years,” she said.“But change is inevitable.”

BY A 11-0 VOTE, The Planning Commission approved Basheer/Edgemoore-Brooks’ application on June 15.

“Collectively, the various measures planned for this development go well beyond the minimum currently required by the Commonwealth and Fairfax County,” said Dranesville Planning Commissioner John Ulfelder. “They also have committed to a phased approach to the development to avoid any erosion and sediment problems that can occur during the development stage. And they have agreed to post-construction monitoring of the downstream channels for two years after completion of the project and to be responsible for any corrective restoration, if it is determined it is required,” said Ulfelder.

Canis said there are risks to the community, the watershed community, and to the entire Potomac watershed.

He called Brooks Farm “one of the last tracts of farm era land in our community.

“It’s not a surprise that residents would take an interest in this property,” he said.