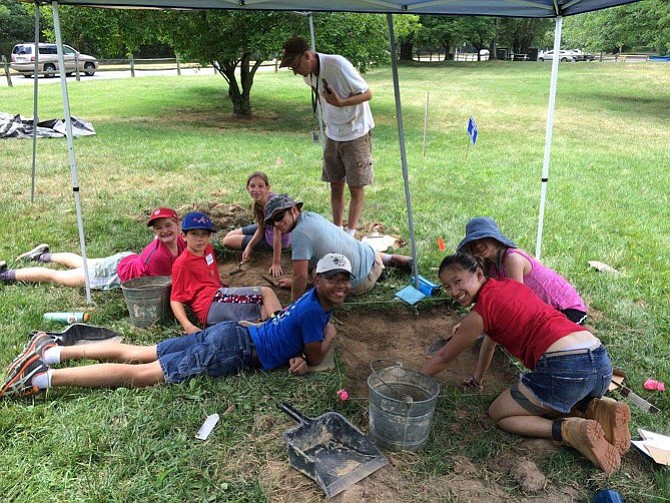 Campers gather to listen to Joyce Casey Sanchez share memories of Post-Civil War Alexandria. Her uncle owned a house close to Jacob Ball’s house, the site where the campers excavated. 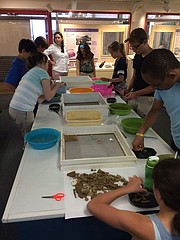 Campers wash artifacts and sort them into categories in the Alexandria Archaeology Museum lab in the Torpedo Factory.

The summer camp is run by the Alexandria Archaeology Museum, part of the Office of Historic Alexandria.

The community in Fort Ward includes homes, a church, burial grounds and a school. Under the supervision of city archaeologists, the youths excavated a home within the community along Braddock Road that belonged to Jacob Ball.

Before the campers began scraping away the dirt, they needed to understand the history of the area they were exploring. Joyce Casey Sanchez, whose uncle owned a house near Ball, shared memories of Post-Civil War Alexandria — Braddock road was a dirt road, and cows roamed near her home.

“We found the foundations of her uncle’s house two years ago, and it is very very close to Mr. Ball’s house,” said Ruth Reader, education coordinator at the Archaeology Museum and the camp coordinator. Sanchez, who is in her 80s, also spoke of three distinct African American communities: the one in Fort Ward, the area where T.C. Williams High School is now, and one in an area that is now Arlington. They were separate communities but they interacted with each other.

Ruth Reeder, the camp coordinator, explained that to an onlooker, Fort Ward is a Civil War site, but an archaeologist who excavates there sees the abundance of Post-Civil War history shown through the artifacts from the African American communities.

The youths also learned that in the ‘60s, the City of Alexandria bought the land at Fort Ward to preserve the area. In reality, the city had plans to use the land for housing. Fortunately for the fort, a resident aware of Fort Ward’s Civil War history demanded that the city preserve the site. As a result; however, the African American community living there was uprooted and displaced.

For the last five years, the camp has excavated different homes in the African American community of Fort Ward. Before that, they excavated Shooter’s Hill at the George Washington Masonic National Memorial. The museum uses aerial photography to choose locations to excavate.

On Monday, Tuesday, and Wednesday, the campers excavated like professional archaeologists. They divided the land into units, with nail and string. And, with their trowels, dust pans, knee pads and clipboards, they scraped the dirt from artifacts and made detailed records of their findings.

Ben Skolnik, a city archaeologist and site supervisor, emphasized that the youths are not just digging randomly; the excavations are “very controlled and methodical.”

Fourteen-year-old camper Gwen Roman said her favorite part was “looking at artifacts and assessing what they could be.” She found Sanchez’s history lesson “very complex and interesting.” Gwen’s group found a strip of boot leather, a piece of ceramic and a nail head, among other items. A different group found a spoon and a base of a glass bottle with a logo. “Alexandria has so much more history than we think,” she said.

On Thursday, the youths headed to the Alexandria Archaeology Museum lab in the Torpedo Factory. There, they washed the artifacts and sorted them into categories. Next, the artifacts will be recorded in the museum database and incorporated into the museum’s collection.

On Friday, the youths returned to the site where their families came to observe their exploration.