Alexandria Column: Squad of Volunteers Arrives with a Vroom
Votes

Alexandria Column: Squad of Volunteers Arrives with a Vroom 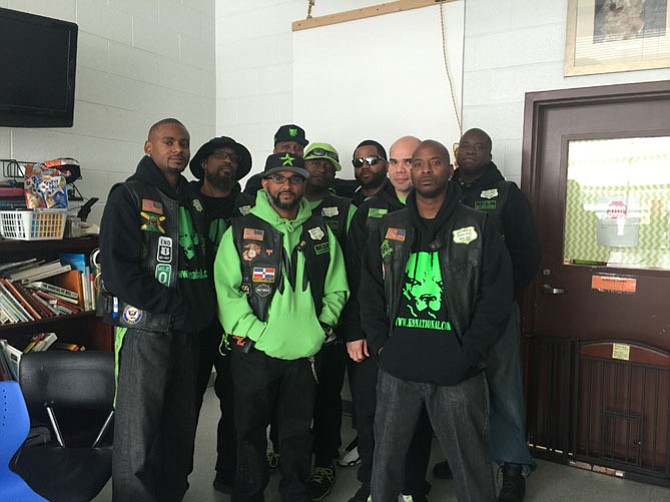 Members of the local chapter of the K9 Motorcycle Club gather at the Animal Welfare League of Alexandria. The men performed several hours of volunteer work for the shelter’s animals. Photo by Owen “Bonez” Hodgson

The Animal Welfare League of Alexandria (AWLA) welcomes all kinds of volunteer help, but some assistance arrives with extra fanfare. That’s what happened earlier this year when 10 men pulled up to the shelter on motorcycles, clad in identical black-and-green leather vests. Members of the local chapter of the K9 Motorcycle Club, the men share a love for both motorcycles and dogs. They spent two hours in the shelter’s community room stuffing special enrichment toys for the shelter’s dogs and then toured the place.

Members of the K9 Motorcycle Club prepare “kong” toys for the dogs at the Animal Welfare League of Alexandria.

“They were super-respectful and engaged — they seemed to adore our dogs, but they liked the cats, too,” recalled Stella Hanly, AWLA’s community relations adviser.

The K9 Motorcycle Club was started in 1998 in North Carolina by four lovers of pitbulls and now has 32 active chapters nationwide. The club’s bylaws require chapters to engage with local animal shelters, donating time and resources to support the animals. Northern Virginia’s chapter is made up of members of the military, active and retired, as well as government workers and entrepreneurs, says its president, Steven “Jay” Johnson. Johnson, who retired from the U.S. Army seven years ago, says he fell in love with one of the dogs at the Vola Lawson shelter during his visit there and came close to adopting her.

It was the K9 Motorcycle Club to the rescue again when the AWLA staged its annual Walk for Animals in Old Town in May. Once again sporting their official leather vests and big smiles, members showed up in time to erect tents over registration tables to shelter volunteers from the pouring rain. They then headed out to the Walk route, serving as marshals for the intrepid walkers and their dogs.

“I don’t know what we would have done without them,” Hanly said. “They really saved the day.”

The Animal Welfare League of Alexandria, celebrating its 70th anniversary, is an independent, local, 501(c)(3) non-profit organization.The AWLA is committed to ending animal homelessness, promoting animal welfare, and serving as an educational resource for the City of Alexandria community. More information is at AlexandriaAnimals.org.