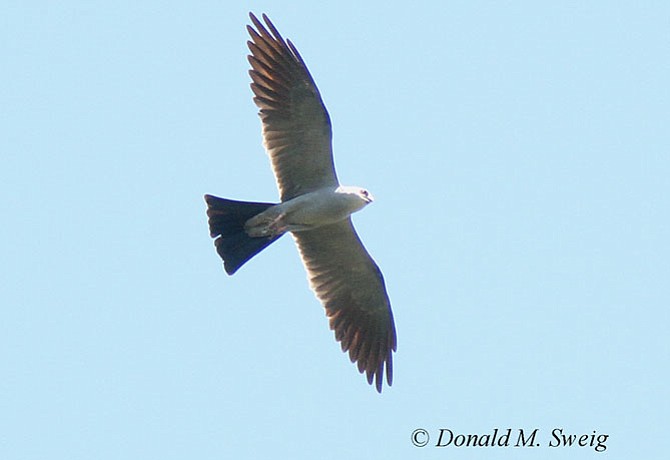 Floating from the east along 17th St. in north Arlington, the graceful Mississippi kite flew into one of the large oak trees on the northeast corner of 17th and Utah. with food for its now quite large chick.

Perched adult Mississippi kite, with a dragonfly in its beak to feed its nearby chick.

Juvenile Mississippi kite eating the songbird that the parent had just brought to it. Notice the red flesh in the bird’s beak, and the songbird’s legs sticking out to the left. Although kites do take small birds as prey, it is an unusual occurrence. Mostly they eat insects such as dragonflies and cicadas.

Standing in the street nearly opposite the oak trees, several enthusiastic and animated birders were exclaiming "Here it comes, it's landing in the tree."

Various birders had been in the area for a week or more trying to figure out exactly where the kite nest was. Kites had been observed flying at several locations (19th and Upton, 18th and Utah, 18th and Taylor, 17th and Taylor, 17th Utah and elsewhere) for several weeks. Everyone knew that there must be a nest nearby, but no one had been able to find it.

For North Arlington, a nesting Mississippi kite is a very unusual and rare event. Although Mississippi kites were seen flying around this area of Arlington last summer, 2016 was the first year in which a kite nest with a chick in it was actually located.

Until 1995, nesting Mississippi kites were unknown in Northern Virginia. In that year an unprecedented nesting took place in Woodbridge in Prince William County. Since that time the number of nesting Mississippi kites in Prince William in Fairfax counties has increased slowly, but steadily. But this is the first pair to be confirmed as nesting in Arlington. So for birders and avian raptor enthusiasts, the nesting at 17th and Utah in Arlington is a big deal, even in the oppressive August heat.

In the more southerly areas of the U. S., the Carolinas, Georgia, Louisiana, etc., Mississippi kites (Incinta mississippiensis) are not an uncommon bird. They nest there in the thousands, and tens of thousands of kites are counted migrating through Mexico to South America each fall. But for Arlington, this is a rare, perhaps even unique event.

For folks looking from the ground, a flying Mississippi kite is a beautiful and graceful bird. It often soars, seeming to just float in the air, until it spots some prey, such as a cicada or dragonfly, and then the wings curve back into a sickle-shape and it can execute a spectacular, almost instantaneous dive. Nothing else looks or flies quite like a Mississippi kite.

The juvenile bird from the Arlington nest is just now learning to fly. It will soon be flying and learning to hunt with his parents, because by the end of August or early September it will have to migrate with the thousands of other Mississippi kites to South America. So, the Arlington Mississippi kites will probably still be around for another couple of weeks or so.

If one wants to go to look for them, they may be seen flying anywhere in the general area where they have been seen before. But 17th and Taylor or Utah is the best place to go look. It is worth noting, that the juvenile will be brown-striped on both its wings and body, unlike its parents which are white and light gray underneath. The adults will also continue to feed the juvenile for some time, until it can learn to hunt for itself. So one might find it perched on a snag waiting to be fed.

If you're interested in such things, grab your binoculars and go have a look. It's a rare opportunity to see a truly beautiful bird.